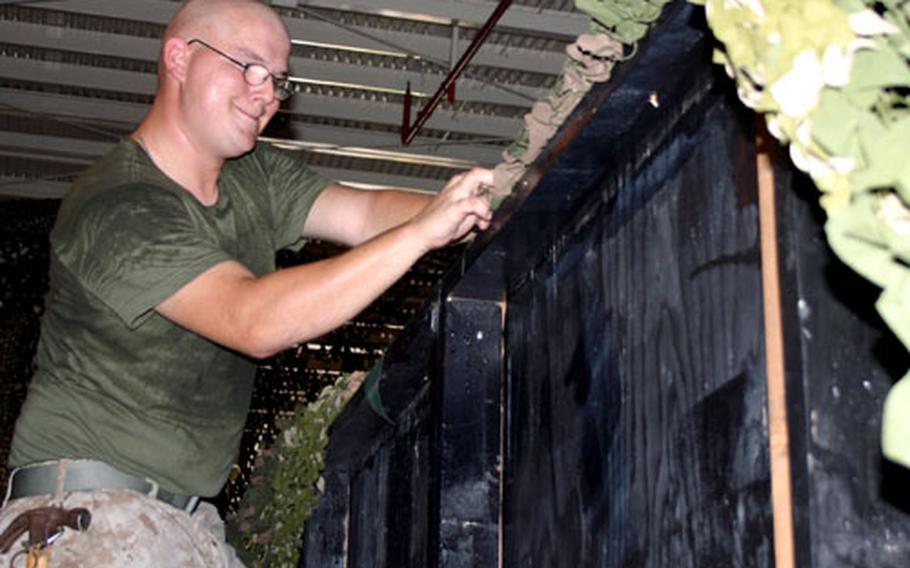 CAMP FOSTER, Okinawa &#8212; Lots of camouflage netting, creepy themes and blood-chilling bumps in the night are just a few of the tricks in store for visitors to the haunted house on Camp Foster this Halloween.

Volunteers building this year&#8217;s haunted house said their secret for creating a scary experience will be surprise.

&#8220;The biggest thing is, it&#8217;s all about the surprises,&#8221; said Sgt. Joseph Drake, who volunteered to turn a room sponsored by Marine Tactical Air Control Squadron 18 into a shop of horrors. There are six rooms in the haunted house.

But first, the volunteers said, they have to set the atmosphere.

Then, they add loud noises, moans, strobe lights and lots of screams, the volunteers all agreed.

You set people up to expect one thing and then throw something else at them, suggested Cpl. James Miranda, working on a room sponsored by Marine Wing Headquarters Squadron 1.

You also have to know what people fear and use it against them, said Cpl. Atish Patel, with MTACS-18.

To build on that fear, Cpl. David Lehrer, working on the room sponsored by MTACS-18, said he thinks &#8220;of crazy ideas like a serial killer family with lawnmower equipment.&#8221;

Mindy Kretz, who is working on the room sponsored by the Okinawa Catholic Youth Group, said she also is thinking of a room with something out of the ordinary &#8212; maybe a &#8220;Texas Chainsaw Massacre&#8221; meat locker.

It has to look real, though, she added.

And a sense of timing is important, too, said Glenn Lorenzo, also with the youth group.

However they plan to do it, volunteers promised this year&#8217;s haunted house will be even scarier than last year&#8217;s.

Volunteers are needed to make Foster haunted house a success

CAMP FOSTER, Okinawa &#8212; Camp Foster&#8217;s haunted house is all set to provide thrills and chills this Halloween in Building 5965 near Gunner&#8217;s Gym, but base officials say they still need volunteers to make it a success.

The haunted house, manned by volunteers, will be open to all status of forces agreement personnel from 6 to 9 p.m. Saturday and Sunday.

It will be closed Monday and open again from 6 to 9 p.m. Tuesday for everyone island-wide. Non-SOFA persons interested in visiting the haunted house must enter Camp Foster by Gate 4. The haunted house will not be open Wednesday.

While admission is free, organizers are asking people to donate a bag of individually wrapped candy.

The candy will be handed out to trick-or-treaters at Camp Foster&#8217;s Trunk-or-Treat scheduled for Tuesday.

Trunk-or-Treat is Camp Foster&#8217;s Halloween event for Okinawans that allows them to bring children to a single location of Camp Foster for trick-or-treating.

Decorated cars will be staged next to the haunted house from 6 to 9 p.m. Tuesday to pass out candy for local and SOFA children.

Gate passes will not be issued for guests to trick-or-treat on Camp Foster on Halloween night.

Volunteers are still needed for Trunk-or-Treat and for the haunted house.