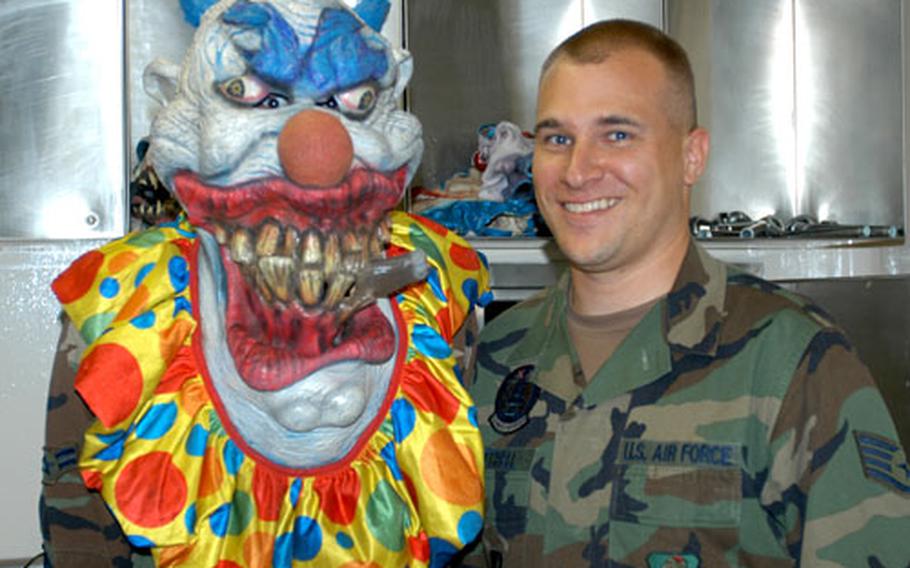 Staff Sgt. Jerred Mitchell of the 35th Communications Squadron at Misawa Air Base, Japan, stands next to one of the scary clowns that will be haunting the squadron&#39;s Haunted Dungeon starting Friday. (Jennifer H. Svan / S&S)

But come this weekend, it likely will be the scariest place on base after sunset.

The 35th Communications Squadron&#8217;s Haunted Dungeon opens its creaky, cobwebbed doors to anyone with base access Friday night.

The frights continue Saturday and Sunday nights and again on Tuesday and Wednesday.

Kids 12 and under are advised to be accompanied by an adult, but there are no age restrictions, said organizer Staff Sgt. Jerred Mitchell, a 35th Communications Squadron project manager.

The basement of Building 513 is located behind the wing headquarters and the new communications squadron building.

This week, it looks more like a scene from a gory horror movie, as scores of volunteers set up props in the basement&#8217;s nine vault-like rooms. There&#8217;s a trough of fake blood and floating bones, a dangling head with no body, and a slew of scary masks waiting to come to life.

But, Mitchell said, the haunted dungeon isn&#8217;t as big on gore as on the art of shock and surprise.

It&#8217;s been three years since the communications squadron put on its last haunted house. This year&#8217;s venture is an effort to raise money for the squadron&#8217;s holiday parties and to cover the cost of care packages for the unit&#8217;s deployed troops, Mitchell said.

A good scare this time of year also can be a morale booster for airmen and their families at Misawa, he said.

Tickets for the Haunted Dungeon are available at the door.

Children to be scared into being drug-free

Kids at Misawa Air Base can get a scare next week, but not in the traditional Halloween sense.

The Lunney Youth Center, in partnership with the base&#8217;s Drug Demand Reduction Program, is hosting a Haunted House of Prevention to show the ghastly effects of drugs on the body.

&#8220;Since this is Red Ribbon Week, and kids are pledging to be drug-free, this is to scare them away from drugs,&#8221; said Sherril Light, DDRP manager and Drug Education For Youth program coordinator.

Red Ribbon Week, which began Tuesday, runs until Wednesday. It&#8217;s a national campaign to encourage kids to stay drug-free. The event at the Lunney Youth Center is from 6 to 9 p.m. Monday and is geared toward school-age children up to 13, Light said.

The haunted house will be divided into two sides. One side, which depicts fictional scenes of crack, methamphetamine and heroin use and their effects on the body, is open to kids 9 and older. The other half of the house focuses on alcohol and smoking and is open to all ages.

Light said handouts will include educational leaflets, trick-or-treat bags, and candy with the motto: &#8220;Life&#8217;s sweet without drugs.&#8221;