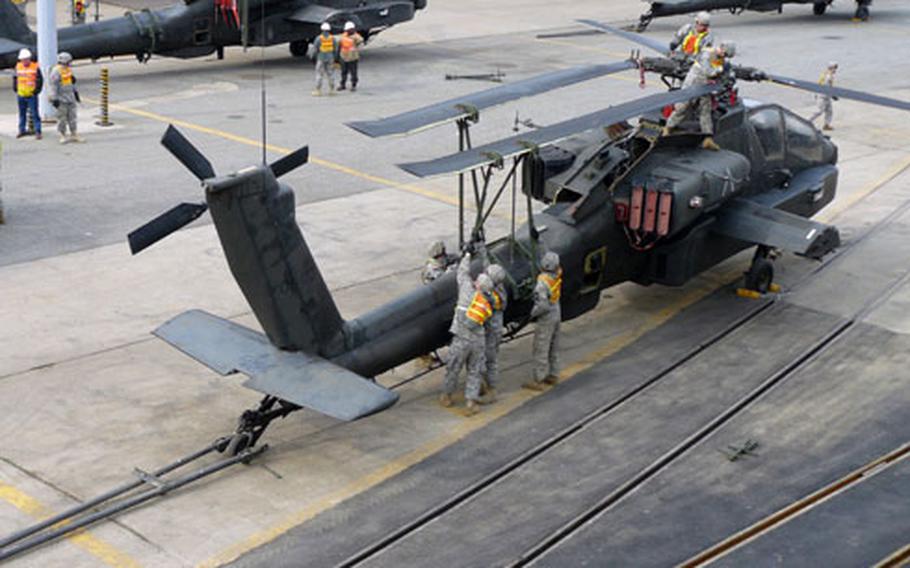 PYEONGTAEK, South Korea &#8212; The Army is all but done moving helicopters and other hardware from Camp Eagle to a pier far south, where the equipment will be loaded onto a ship headed for California, officials said Thursday.

Nicknamed "Half-Attack," the battalion is moving to a new home at Fort Carson, Colo.

A commercial ship hired by the U.S. military is due at the Army&#8217;s Pier 8 in Busan next week.

At that time, dockworkers and U.S. soldiers will begin loading Half-Attack&#8217;s helos and other equipment aboard the Motor Vessel Green Dale, which usually hauls Japanese-made cars to America&#8217;s west coast.

The Green Dale is a "roll-on/roll-off" vessel designed so that vehicles can be driven directly into and from its holds.

"It&#8217;s a perfect vessel for the helicopters because you just roll them on to the vessel," said Lt. Col. Sam Blanton, commanding officer of the 837th Transportation Battalion.

The unit is nicknamed the "Kargo Kings" and oversees operation of Pier 8, the U.S. military&#8217;s main entry point for oceangoing cargo in South Korea.

"The Green Dale is no stranger to moving warfighting cargo or attack helicopters," Blanton said.

Its company has hauled U.S. military cargo since the onset of the wars in Afghanistan and Iraq, he said.

Half-Attack&#8217;s helicopters flew the 2 hours, 15 minutes to Pier 8 from Camp Eagle in Wonju on March 8 and 9, said Lt. Col. David E. Salter, commanding officer of the brigade&#8217;s 602nd Aviation Support Battalion. Other equipment was put aboard 168 trucks and driven in a convoy 258 miles to the pier, said Salter, whose unit is at Camp Humphreys in Pyeongtaek.

But because many of the unit&#8217;s own pilots were tied up with moving household goods and otherwise making the stateside move, some of the helos were flown by pilots from other brigade elements, including the 4th Battalion, 2nd Aviation Regiment.

The Apaches flew down in twos. One would stay in the air while the other touched down and was towed to a staging area; then the second would land.

Once the helos were in the staging area, troops from the 602nd folded the rotors back toward the tail boom and fastened them for shipping, Salter said.

Other soldiers readied about 350 Humvees, trucks and trailers, and hundreds more pieces of gear such as generators and tents, Salter said.

Once the Green Dale arrives, the Kargo Kings will take over. The battalion employs stevedores under contract with a local firm. They and the unit&#8217;s cargo specialists will finish the process.

"We developed a stow plan that tells you where every piece of equipment goes in on the vessel," said Blanton, "and we orchestrate the entire upload."

The soldiers of the 602nd will also be on hand until the ship pulls away.