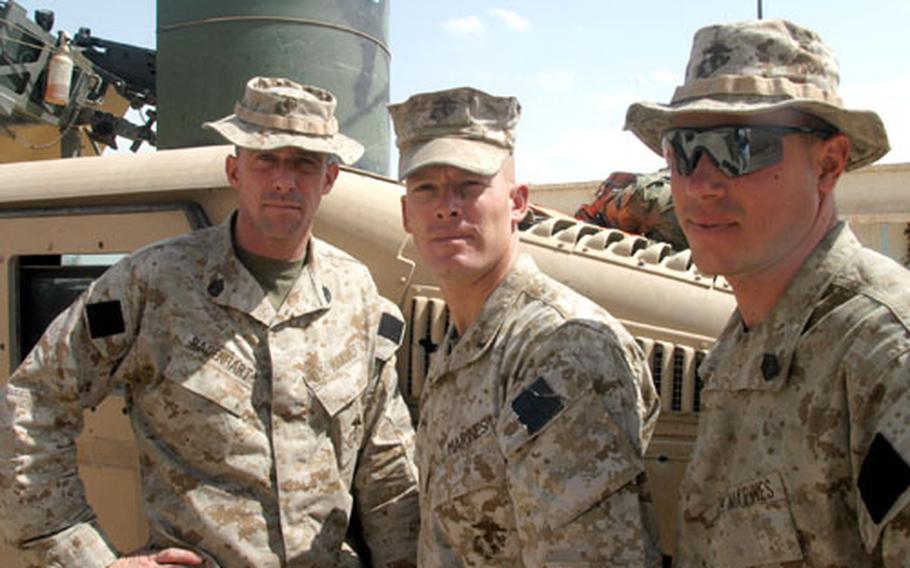 Gunnery Sgt. Jeff Dagenhart, left, 1st Lt. John Hunt, center, and Gunnery Sgt. Robert Bailey, right, all with Weapons Company, 3rd Battalion, 8th Marines, daily alert their Marines about the dangers of the war in Iraq and how much different the threat condition is compared with the battalion’s deployment last year to Haiti. (Sandra Jontz / S&S)

Gunnery Sgt. Jeff Dagenhart, left, 1st Lt. John Hunt, center, and Gunnery Sgt. Robert Bailey, right, all with Weapons Company, 3rd Battalion, 8th Marines, daily alert their Marines about the dangers of the war in Iraq and how much different the threat condition is compared with the battalion’s deployment last year to Haiti. (Sandra Jontz / S&S) 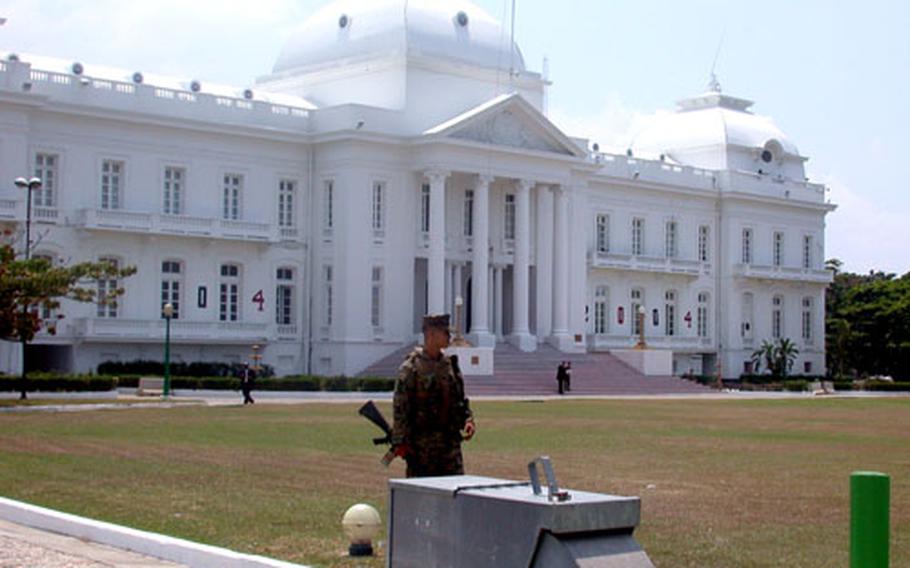 CAMP FALLUJAH, Iraq &#8212; When the 3rd Battalion, 8th Marine Regiment deployed to Haiti last year, some of the junior Marines lamented that they were the &#8220;forgotten battalion,&#8221; seemingly overlooked while their brethren sustained casualties in the &#8220;real war&#8221; in Iraq.

But now that the unit is in Iraq &#8212; on the outskirts of Fallujah &#8212; the Haiti deployment is viewed as a blessing in disguise. Haiti provided the perfect on-the-job training, said Master Sgt. Stewart Stout, 39, a 19-year veteran who is the operations chief for 3-8 Marine&#8217;s Weapons Company.

Last year, the battalion&#8217;s scheduled deployment to Iraq, set for late summer, was postponed because of the impromptu deployment to Haiti in late February 2004 to quell the uprising following the ouster of former President Jean Betrand-Aristide.

When interviewed in Haiti, 1st Sgt. Tory Kitchen said his Marines&#8217; heads weren&#8217;t focused on the mission. They worried more about what was going on at home in Camp Lejeune, N.C., problems with girlfriends, wives, children, money &#8212; and less on the gangs who took potshots at the Marines patrolling the capital of Port-au-Prince and surrounding areas.

Now Marines such as Lance Cpl. Kyle Dudding, an anti-tank guided missleman and all of 19 years old, have two combat deployments to call his own.

&#8220;In Haiti, we could be operating in an area doing humanitarian aid and medical assistance, be in another area where there was rioting, while in another block, there was an all out warfare,&#8221; he said.

&#8220;That prepared us for here. The [Jan. 30] elections is a good example. That was a good thing, while on the other side of town, there were &#8230; mortar attacks and RPG (rocket-propelled grenade) attacks on our units. We handled it all,&#8221; said Haddle, the platoon sergeant for battalion commander Lt. Col. Stephan Neary&#8217;s personal security detachment.

Gunnery Sgt. Jeff Dagenhart, 35, platoon leader, has been hit by four roadside bombs since arriving in Iraq in late January. One of them sent shrapnel into his right leg. His buddy, Gunnery Sgt. Robert Bailey, 32, has encountered four as well.

As of Thursday, 137 improvised explosive devices, or IEDs, have hit the five platoons of Weapons Company alone. Weapons Company primarily runs the security of the combined 50-some miles of two main service roads, Mobile and Michigan, having driven 13,500 miles each in the nearly four months here.