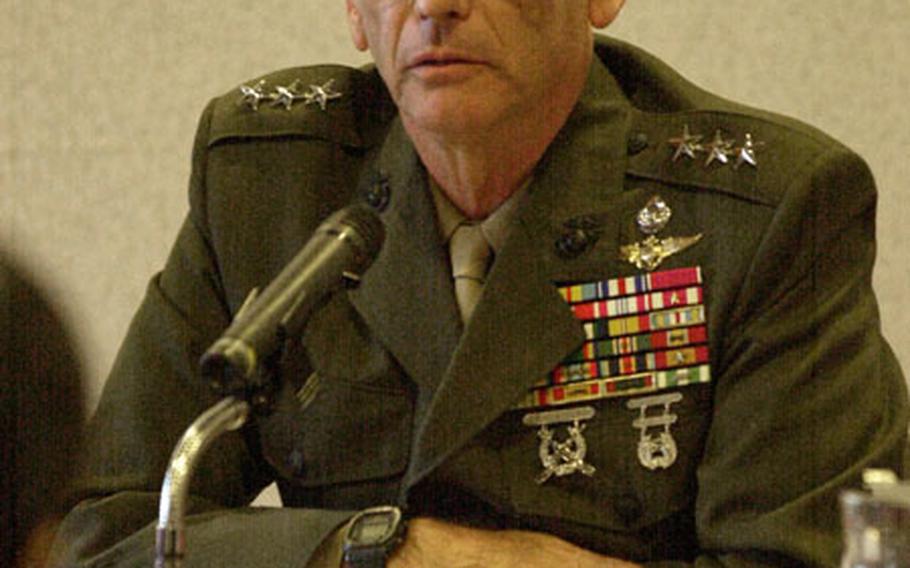 TOKYO &#8212; The top-ranking Marine in the Pacific predicts U.S. combat units will remain in Iraq for a year to 18 months.

&#8220;Only because of the work that they&#8217;re doing,&#8221; said Lt. Gen. Earl B. Hailston, commander, Marine Forces Pacific. &#8220;They are the ones training and building an Iraqi self-defense force army&#8221; and a police force, as well as constructing essential infrastructure for the Iraqi people.

Hailston, formerly the commander of 3 Marine Expeditionary Force and Marine Corps Bases Japan, spoke to 32 servicemembers from Okinawa gathered in Tokyo on Monday for the eighth annual Welcome Marine Program.

It&#8217;s designed to strengthen the U.S.-Japan alliance by introducing servicemembers to the Japanese mainland. For a week, Marines, sailors, airmen and soldiers visit cultural landmarks, sample Japanese cuisine and even spend an evening with a Japanese host family.

Reiko Tamura, a program founder and president of its nonprofit organization, invited Hailston, asking him to talk about the Marines in Iraq.

Hailston described some major battles the Marines fought, noting that the Corps deployed more than 65,000 Marines and 8,000 sailors for Operation Iraqi Freedom. None of those Marine units came from the Pacific, Hailston said.

After his talk, Hailston took questions from the Okinawa servicemembers, as well as high-ranking Japanese government officials.

But rebuilding a society takes time, he said.

The eight Marine battalions still in Iraq, however, could start to come home as early as September, Hailston added.

Hailston did not specify which priorities might need to be shifted, but according to Pentagon figures, some 500,000 U.S. troops are in 136 countries. The commitment from Marines in the Pacific is small: Hailston said a rifle company from the theater is providing force protection to Maritime Sealift Command ships &#8212; he did not say where &#8212; and two detachments from 3 MEF are supplying tactical air-operation centers in Uzbekistan and Kyrgyzstan.

The far-reaching deployment of U.S. troops across the globe comes as Washington is considering realigning its military forces around the world to cope with new threats such as terrorism.

Hailston downplayed any realignment efforts in Japan as being routine.

Hailston oversees all Marines in Japan, Hawaii and California. He is retiring, to be replaced by Marine Lt. Gen. Wallace C. Gregson, former commanding general of 3 MEF.