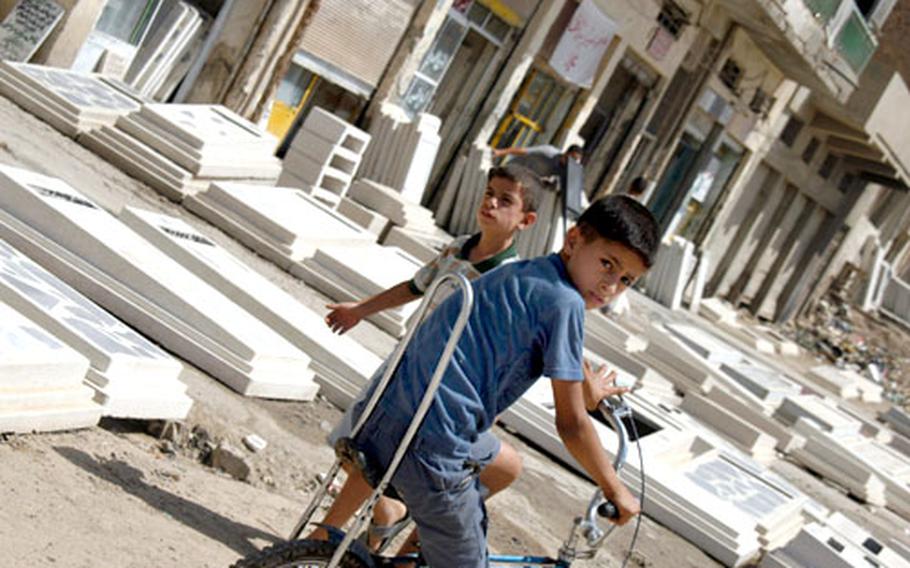 A child rides his bicycle Tuesday morning in front of a gravestone shop near Haifa Street. Insurgents once hid weapons in the graveyard across the street. Now, it&#39;s been at least two months since a gun fight or car bombing in the neighborhood, both Iraqi soldiers and neighbors said. (Teri Weaver / S&S)

A child rides his bicycle Tuesday morning in front of a gravestone shop near Haifa Street. Insurgents once hid weapons in the graveyard across the street. Now, it&#39;s been at least two months since a gun fight or car bombing in the neighborhood, both Iraqi soldiers and neighbors said. (Teri Weaver / S&S) 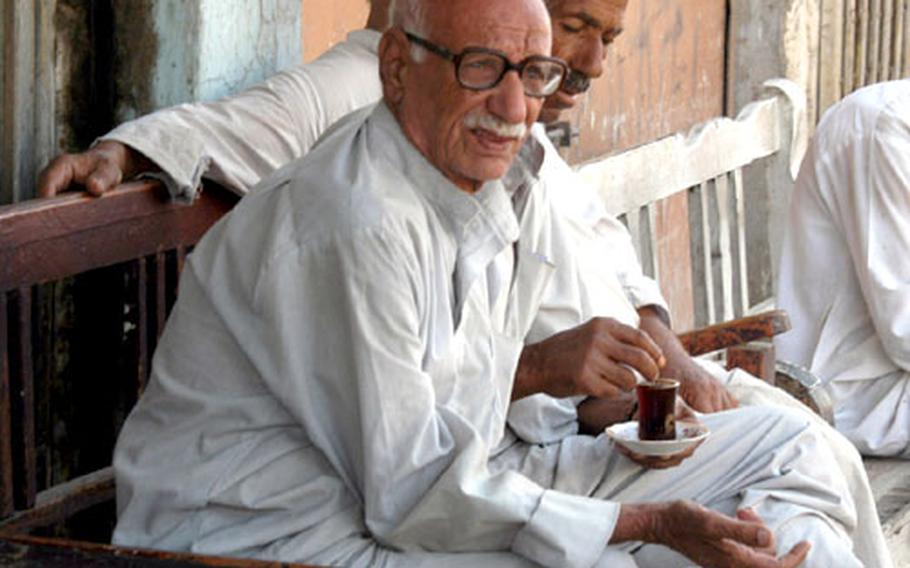 Men talk outside a cafe in the Haifa Street neighborhood. Others nearby said the street has improved dramatically; three months ago, they said, you couldn&#39;t sit on the street and talk because of the violence. (Teri Weaver / S&S) 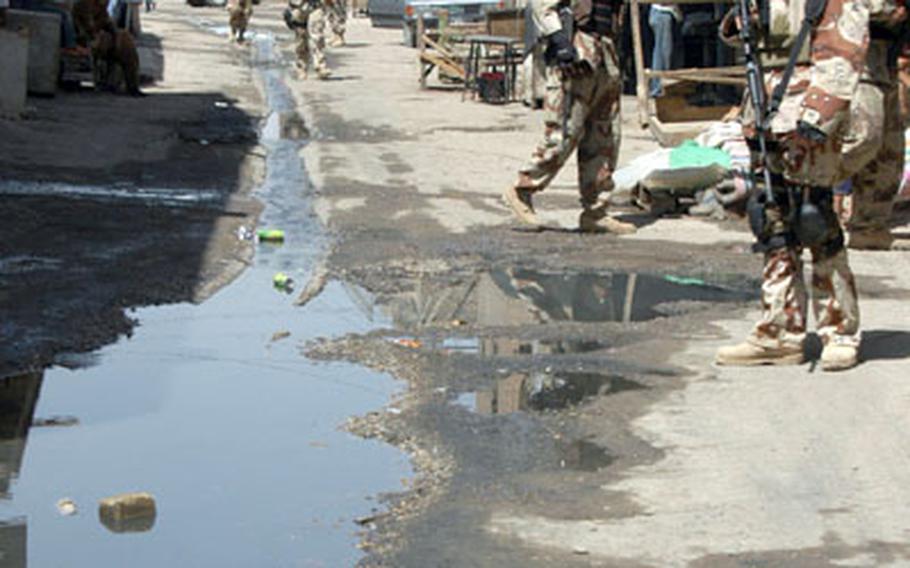 Soldiers from an Iraqi platoon patrol an alley in the Haifa Street neighborhood. The Iraqi army began foot patrols about three months ago, the same time they made some key discoveries of insurgent hideouts in the neighborhood. It’s been two months since a car bomb hit the neighborhood, officers said. (Teri Weaver / S&S) 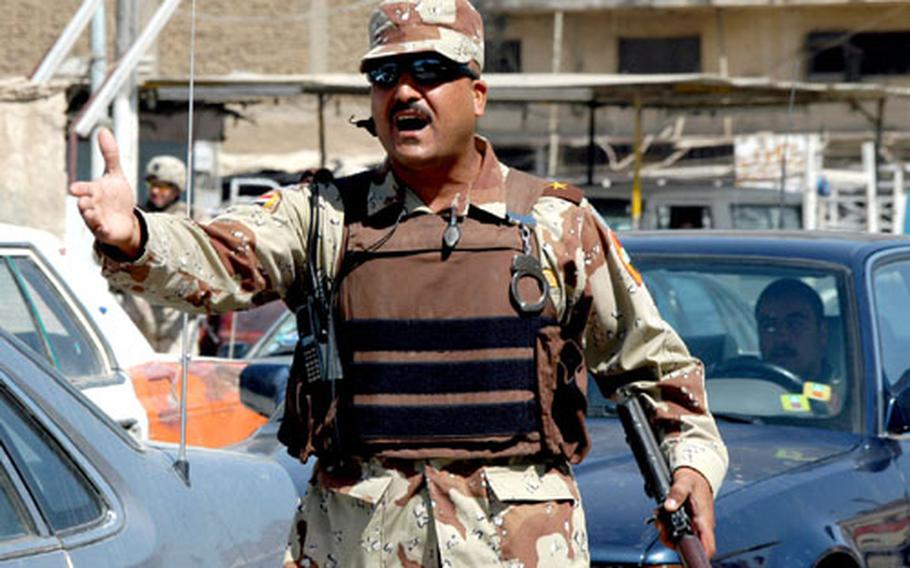 Lt. Raad Abud Gasin directs traffic during a walking patrol in the Haifa Street neighborhood of Baghdad on Tuesday morning. The lieutenant grew up near Haifa and still lives there, one of the reasons the battalion he’s in has been so successful in clearing violence from the area. (Teri Weaver / S&S) 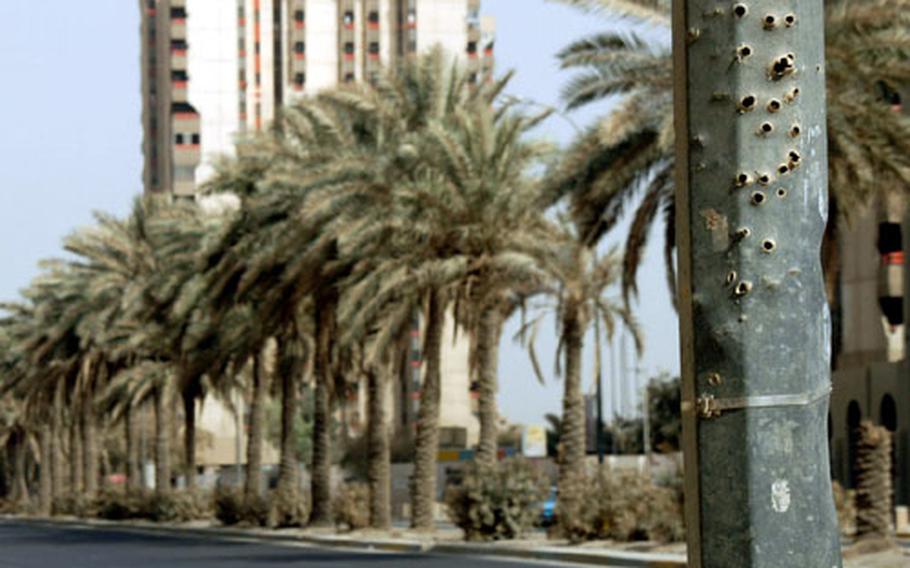 A utility pole on Haifa Street shows the remnants of the violence that once plagued the Baghdad neighborhood. (Teri Weaver / S&S)

BAGHDAD &#8212; A year ago, terror reigned on Haifa Street, a boulevard in western Baghdad just south of the Tigris River.

In one battle early last summer, insurgents took a wounded Iraqi soldier, tied him to a motorcycle and dragged him through the streets, said Lt. Add Al-Kharlim, an Iraqi platoon leader who was there that day.

&#8220;The terrorists were powerful,&#8221; he said through an interpreter, as he and his soldiers walked the same neighborhood Monday afternoon.

The lieutenant isn&#8217;t the only one. Women walk home with groceries. Kids ride bicycles and run from one alley to the next, chasing soldiers and anything else that catches their interest. Men sit at caf&#233;s, drinking tea, chatting and reading the newspaper.

A few months ago, insurgents ruled the area, American and Iraqi soldiers say. Snipers sat atop apartment buildings to pick off soldiers and pedestrians. Car bombs and rocket-propelled grenades exploded often. A nearby cemetery and mosque each served as weapons hideouts for &#8220;the bad guys,&#8221; as the Americans and Iraqis call the insurgents. Few people ventured into the streets.

But about three months ago, two things changed: The Iraqi army raided houses near Haifa and caught three men they say were behind much of the violence. Then, the Iraqi army&#8217;s 1st Battalion of the 1st Brigade began walking the streets.

They put their own snipers on the tops of buildings. They began getting more information &#8212; and trust &#8212; from the neighbors and business owners. And they were able to make the streets safer, said Maj. Fuad Issa Salih, a company commander within the battalion.

&#8220;We get to this result because of the patrols,&#8221; he said Tuesday during an interview in his office, a palace that once housed one of Saddam Hussein&#8217;s daughters.

Squads of Iraqi soldiers patrol the area at least 10 times a day, Fuad said. They go out for two hours at a time during the day and night.

Throughout Baghdad, most Iraqi squads patrol on foot to save fuel and to avoid getting stuck with an overheated vehicle. What makes the 1st Battalion&#8217;s patrols different is its members&#8217; experience and their knowledge of the neighborhood, say U.S. soldiers who have been working with the Iraqis to help manage their patrols.

Many of the battalion&#8217;s members live in the Haifa Street area. They know when a stranger tries to move in.

The 1st Battalion also has started doing things the Americans once did. It holds health clinics for the neighbors. Its soldiers give away coloring books to the children.

The actions have paid off.

&#8220;We call this grenade alley,&#8221; said Lt. Mark St. Romain, 23, of Baton Rouge, La., on Monday afternoon as he followed an Iraqi patrol. The alley weaved through houses in a space so narrow, it would be hard for three men to walk abreast.

On Monday afternoon, the only activity was the women and children peeking out to see who was walking down the lane. Prayers from a nearby mosque echoed in the distance.

On Tuesday morning, Lt. Raad Abud Gasin took a squad of soldiers out for a two-hour patrol. They walked around Haifa to a nearby street that serves as an industrial route near the river&#8217;s edge. Car and boat mechanics&#8217; shops lined the streets. The morning traffic &#8212; buses, donkey carts, cars, garbage trucks and an occasional motorcycle &#8212; clogged the streets.

Raad marched through the traffic and ordered his soldiers to try to clear out some of the congestion. He directed traffic and shouted directions without touching his gun. When the traffic calmed, only slightly, he walked the sidewalks and talked to shop owners. He looked more like a cop walking his beat than a soldier fighting a war.

At a caf&#233;, a group of men read their newspapers and watched Raad direct the chaos.

But the men had other concerns they wanted heard. The electricity runs two hours on, six hours off. Raw sewage still seeps into the streets.

The question remains: Why haven&#8217;t the Iraqis and the Americans been as successful in other parts of the city, where car bombings and other attacks kill dozens each week?

The Americans say the success in Haifa is because of the Iraqi battalion&#8217;s experience, and that it will take time for other units of the Iraqi army to become as skilled and confident.

Fuad, the company commander, said he doesn&#8217;t know, but offered one simple guess.