Haggis: So good it's offal 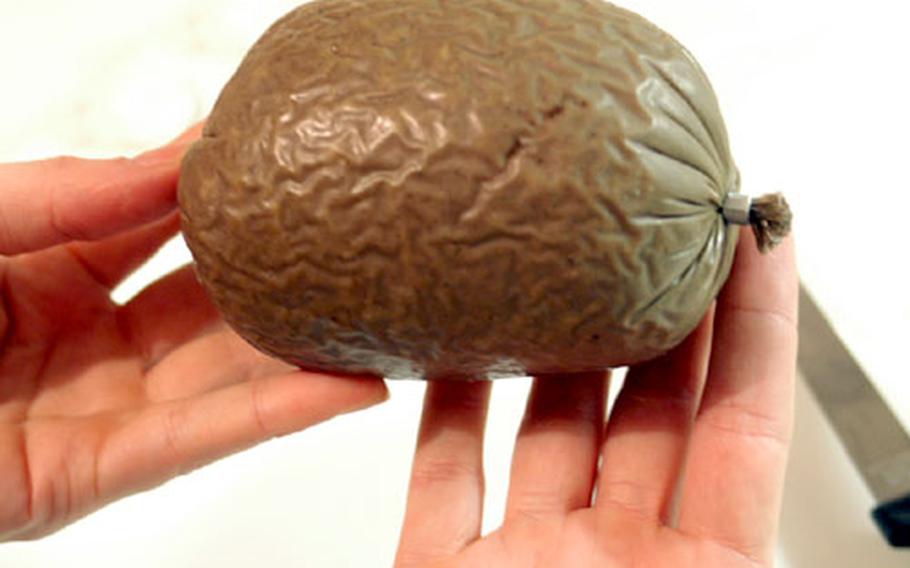 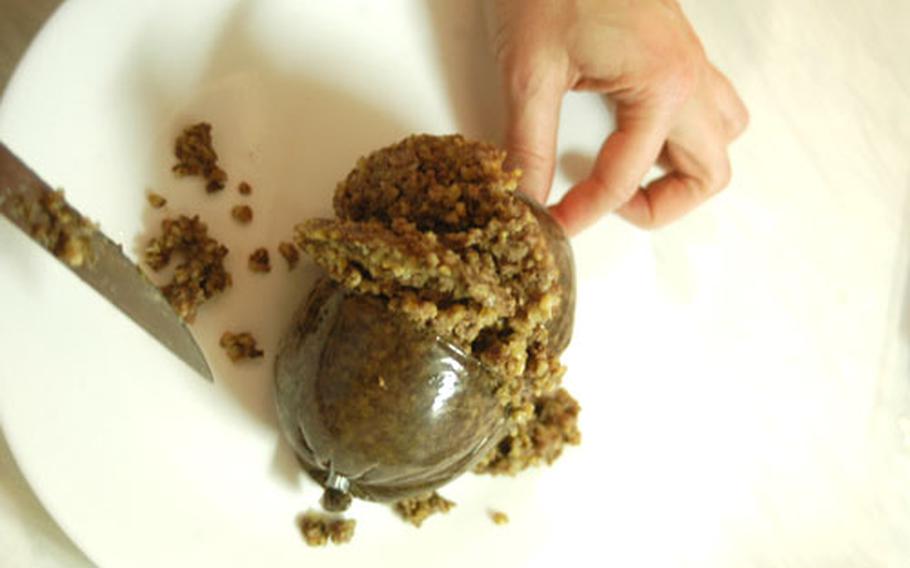 When cooked, the sealed-in haggis will burst lightly out of the casing as soon as it is pierced. Scoop out the meat and discard the pouch. (Ben Murray / S&S) The final result. Serve with neaps and tatties and a rich merlot ... and enjoy. (Ben Murray / S&S)

And dish them out their bill o&rsquo; fare,

But, if ye wish her grateful prayer,

In a lot of ways, the national dish of Scotland is a lot like a hot dog: It looks a little funny, it tastes pretty good, but if you knew what was in it, you might not eat the thing.

Though the Scots would be loath to consent to such a comparison, they should be comfortable that their dish, haggis, is far better tasting and more nutritious than a ballpark frank.

&ldquo;It smells so good,&rdquo; said one potential taster, likening the odor of haggis to that of &ldquo;seasoned turkey.&rdquo; Looking at the pile of grayish-brown ground meat dotted with white kernels of oatmeal, another food judge said it looked a lot like taco meat.

But if there&rsquo;s one true thing about haggis, it&rsquo;s that many people &mdash; especially squeamish Americans &mdash; absolutely refuse to touch the stuff once they know what&rsquo;s in it.

Made from the entrails of either sheep or swine, haggis consists almost entirely of an animal&rsquo;s lungs, heart, liver and other internal organs, ground up with oatmeal and spices and cooked (this is the hardest part) in the beast&rsquo;s own stomach.

They are the kind of ingredients that are tough on the delicate constitutions of those accustomed to eating just the muscles of domesticated animals, but if ever there was a reason to try haggis, it is Robert Burns Day, a Scottish holiday coming Jan. 25.

It is then that people all over Great Britain break out the stomach casings and go to town, wolfing down the dish in honor of Scotland&rsquo;s greatest poet. It also is a good opportunity for Americans in the United Kingdom to try this local culinary delight, and it&rsquo;s so easy to prepare there&rsquo;s little excuse not to do it.

To start the process, all you have to do is go down to the local Tesco and buy a packaged haggis, found in or near the sausage section. Generic haggis, made from pork parts, runs only about 1.60 pounds (about $2.85) and comes in a synthetic-looking skin, while a more traditional lamb haggis goes for about 2.30 pounds and comes in what is defiantly an animal&rsquo;s stomach. Alternatively, local butchers in England also stock haggis around Robert Burns Day.

While you&rsquo;re at the store, pick up some potatoes and turnips (tatties and neaps), the traditional side dishes with haggis, and you&rsquo;ll have a full, heavy meal for about $10.

Once home with the haggis, the easy way to prepare it is to wrap it in foil, put it in a pan with a drip rack and fill the bottom with water, said Stephen Graham, a chef at MacKenzie&rsquo;s restaurant in Edinburgh, Scotland. Steam it in the oven at 200 degrees Celsius for 40 minutes or, if you don&rsquo;t have the pan, just boil it for about an hour, Graham said.

While it&rsquo;s cooking, boil and mash the potatoes and turnips and season them a little, he said, and as soon as the haggis is done, you&rsquo;re eating. Just pierce, empty and discard the casing, and the pre-spiced haggis is ready for consumption.

It&rsquo;s a simple meal with a strikingly rich taste. As an experiment, Stars and Stripes tried the boiling method recently, and met with pleasing results. The haggis, when it starts out, is pretty unappealing &mdash; it looks exactly like something that came out of an animal&rsquo;s innards.

Fully cooked, however, it tastes much like spiced hamburger, with a slightly softer, more mealy consistency.

One taster described it simply as &ldquo;all right,&rdquo; but said she couldn&rsquo;t bear to think about what was in it. Halfway through a bite, however, she made a dubious comparison:

&ldquo;If you think about it, McDonald&rsquo;s is pretty much the same stuff.&rdquo;

And if that isn&rsquo;t a reason to try new meats, you won&rsquo;t find one.

Steam: Place in a steamer over boiling water for 1 hour, 30 minutes

Microwave: Remove all packaging including metal clips, and place in a microwave-safe dish. Cook on high for 14-18 minutes, fluffing occasionally with a fork.