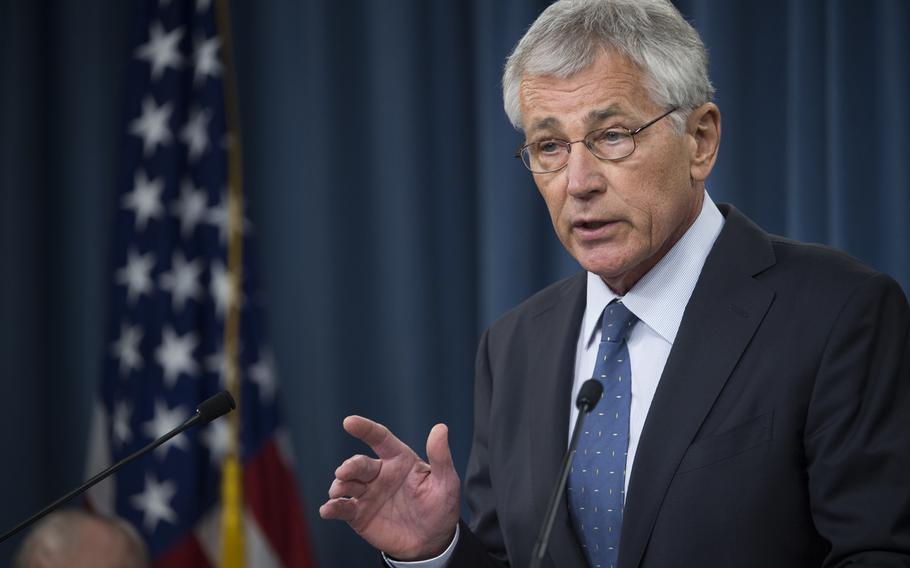 Secretary of Defense Chuck Hagel briefs the press regarding his recommendations to the President for the fiscal year 2015 budget at the Pentagon Feb. 24, 2014. (Aaron Hostutler/U.S. Marine Corps)

In a preview of the Obama administration’s 2015 defense budget request, Hagel proposed shrinking the Army to its smallest size in three-quarters of a century, curbing the growth on military pay and benefits and focusing spending on force-multiplying technologies.

Using the first full budget with his imprint as secretary, Hagel is hoping to reshape the military after more than a decade of war in Iraq and Afghanistan at a time when the Pentagon is roped in by fiscal constraints set by Congress.

“We are repositioning to focus on the strategic challenges and opportunities that will define our future: new technologies, new centers of power and a world that is growing more volatile, more unpredictable and in some instances more threatening to the United States,” Hagel said Monday at the Pentagon.

President Barack Obama will submit his budget to Congress next week.

Cutting forces and slowing the growth on pay and benefits for the troops immediately raised red flags among leading Republicans and Democrats.

“The all-volunteer force is a finely tuned instrument,” Rep. Howard “Buck” McKeon, R-Calif., the House Armed Services Committee chairman, said in a statement. “That is why [last year’s defense bill] instituted a commission to examine the compensation structure. I continue to believe it would be foolish to institute those significant, piecemeal changes before the commission reports — especially since these moves are the consequence of trying to resolve our fiscal problems on the backs of our troops.”

Having backtracked just this month on suggested cuts to cost-of-living increases of 1 percent to military retirements, lawmakers appear in little mood to weigh difficult, if necessary, defense reductions, especially as the nation gears up for midterm elections in November. They backtracked in large part due to the pressure by veterans groups, who again went on the offensive.

The Iraq and Afghanistan Veterans of America hammered the administration for proposing a budget that they say would increase the cost of living for servicemembers.

“Here we go again,” said IAVA Founder and CEO Paul Rieckhoff, in a statement. “Washington is trying to balance the budget on the backs of those who have sacrificed the most. We know the Defense Department must make difficult budget decisions, but these cuts would hit servicemembers, making it harder for them and their families to make ends meet.

“Last week we learned that members of the military redeemed nearly $104 million in food stamps at commissaries in the previous year,” Rieckhoff said. “Now the Defense Department wants to cut subsidies that servicemembers use to pay for diapers for their kids and to put bread on the table.”

An Army of fewer

At its core, the plan sees the U.S. military as no longer sized to conduct large, protracted ground wars. Instead, more emphasis will be on versatile, agile forces that can project power over great distances, including in Asia.

According to documents obtained by USA Today, Gen. Raymond Odierno, Army’s chief of staff, is unhappy about the reductions.

Odierno has warned Pentagon leaders that the 450,000-soldier level would be “too small,” and at “high risk to meet one major war,” according to the documents. The documents also showed that Army leaders said the service could not adequately protect the country and fight abroad at the 420,000-soldier level.

Gov. Terry Branstad, R-Iowa, said he and others were concerned about reductions in funding because the National Guard plays such a crucial role in responding to emergencies in states. Given that the Army has experienced a disproportionate increase in its budget in the past decade, Branstad said, “that’s where we think the reductions should be” made.

Other contentious elements include the elimination of the Air Force’s A-10 “Warthog” tank-killer aircraft and the Cold War-era U-2 spy plane; and domestic military base closings that Congress has roundly rejected since Obama became president.

“We cannot fully achieve our goals for overhead reductions without cutting unnecessary and costly infrastructure,” Hagel said. “... DOD will ask Congress for another round of Base Realignment And Closure in 2017. I am mindful that Congress has not agreed to BRAC requests in the last two years. But if Congress continues to block these requests, even as they slash the overall budget, we will have to consider every tool at our disposal to further reduce infrastructure.”

The tax-free housing allowance will be rolled back by 5 percent; a military pay raise would match last year’s 1 percent hike — if Congress doesn’t mandate more; commissary subsidies would be slashed by more than two-thirds, resulting in higher costs to the shopper; and health care fees would increase for active-duty families and retirees.

“Past experience capping military raises below private sector pay growth shows once pay-raise caps begin, they continue until they undermine retention and readiness,” Ryan said. “When extended pay-raise caps hurt retention in the 1970s, Congress had to enact two double-digit raises to correct that.”

The Associated Press, The Washington Post and USA Today contributed to this report.