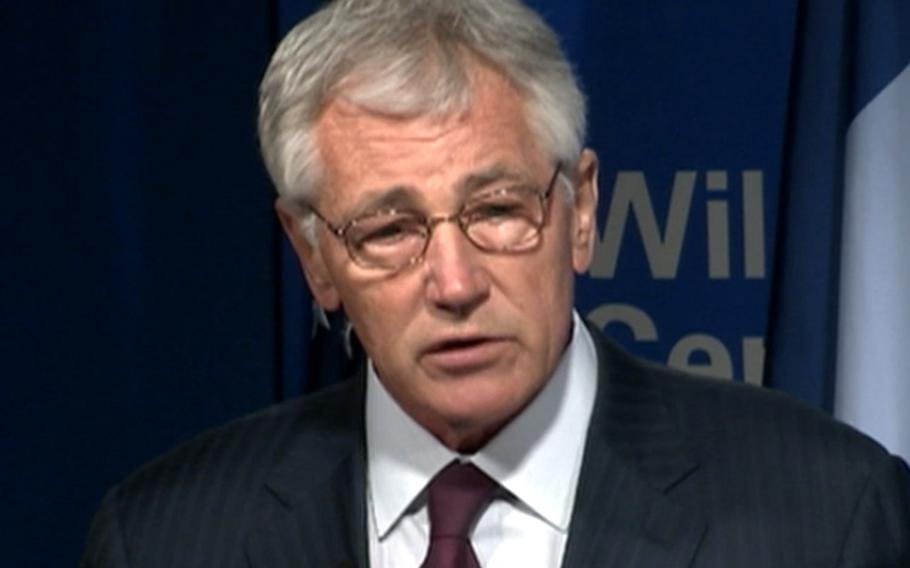 Secretary of Defense Chuck Hagel speaks at the Woodrow Wilson Center for International Scholars in Washington, May 2, 2014. (Pentagon Channel)

WASHINGTON — Defense Secretary Chuck Hagel said Friday that Russia will challenge the NATO alliance for years to come, and urged other alliance members to ramp up their defense spending.

Earlier this year, Russia annexed Crimea, and Moscow has massed tens of thousands of troops and other military assets along Ukraine’s eastern border. The U.S. and other countries have suggested that pro-Russian separatists fomenting unrest in eastern Ukraine are at least partially controlled by the Kremlin.

To reassure jittery allies who fear Russian aggression, the U.S. has deployed additional troops and aircraft to Poland and the Baltic States. But Secretary of Defense Chuck Hagel said near-term measures aren’t sufficient, and he called on other members of NATO to boost their defense spending with an eye on Russian provocations as a problem that won’t go away anytime soon.

“Over the long term, we should expect Russia to test our alliance’s purpose, stamina, and commitment,” Hagel told an audience at the Woodrow Wilson Center for International Scholars in Washington on Friday.

Under previous agreements, all NATO members are supposed to be spending at least 2 percent of their GDP on their militaries, but only a handful of the alliance’s 28 members have fulfilled their pledges. The Defense Department is hoping that fears stoked by Russia’s latest military moves will open a political window for greater European investment in collective defense.

U.S. officials have long complained that other NATO countries haven’t shouldered their share of the burden when it comes to alliance security. In his speech, Hagel noted that the U.S. spends three times as much on defense as its other NATO allies put together, despite the fact that the combined GDP of the other 27 members is larger than America’s economy.

“In recent years, one of the biggest obstacles to Alliance investment has been a sense that the end of the Cold War ushered in the ‘end of history,’ an end to insecurity — at least in Europe — and the end from aggression by nation-states. Russia’s actions in Ukraine shatter that myth, and usher in bracing new realities,” Hagel said.

“We must see renewed financial commitments from all NATO members [because] Russia’s actions in Ukraine have made NATO’s value abundantly clear.”

Hagel called for the inclusion of finance ministers and senior budget officials at a NATO ministerial meeting, while arguing that “talking amongst [defense ministers] is no longer good enough.”

He said the alliance must beef up its military capabilities, exercises, and joint planning. But he said nonmilitary measures are also needed in the face of Russian aggression. Hagel emphasized the need to wean Europe off its dependence on Russian energy supplies, noting that the U.S. Department of Energy has conditionally approved export permits for liquefied natural gas that would add up to more than half of Europe’s gas imports from Russia.

Earlier this week, Estonian defense minister Sven Mikser, whose country did not win independence from the Soviet Union until 1991, said other NATO members needed to step up to the plate financially, and he accused them of long ignoring the threat posed by Russia.

“I don’t think that we in the Baltics, or those Black Sea borderline states in the south, that we needed any waking up … [Russia’s actions toward Ukraine] hasn’t been so much a surprise for us as it was probably for some other — some other Europeans. It’s sort of a ‘we told you so’ moment,” he said Wednesday during a conference at the Atlantic Council, a think tank in Washington.

In the post-Cold War era, NATO officials have said that they see Russia as a potential strategic partner, and the West has made efforts to increase defense cooperation with its former enemy, to varying degrees of success. But Hagel seemed to question whether that is still a viable path, in light of events in Ukraine.

“Today, NATO must stand ready to revisit the basic principles underlying its relationship with Russia,” he said.

The Pentagon chief’s remarks came a day after Alexander Vershbow, the deputy secretary-general of NATO, went even further, telling reporters that Russia should now be considered an adversary rather than an alliance partner.