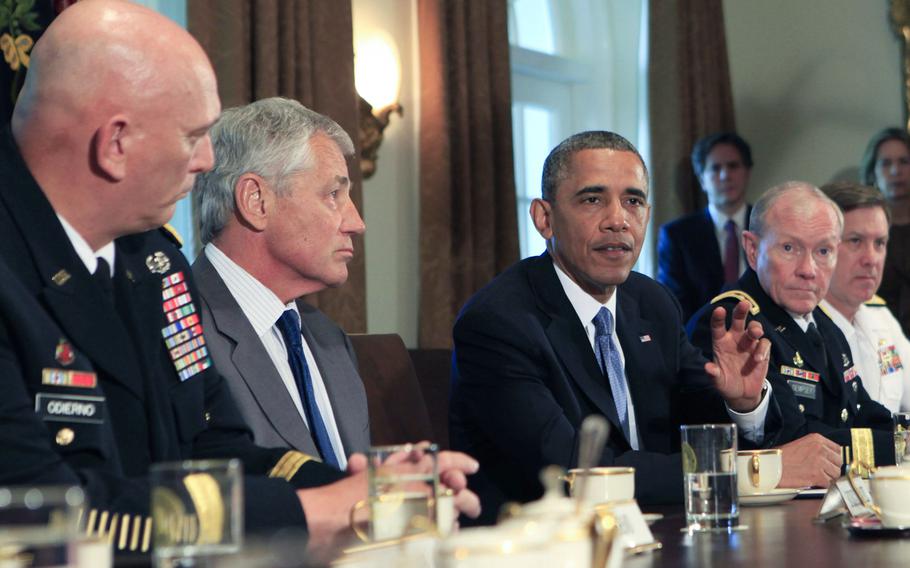 WASHINGTON — A measure to quickly put sex assault allegations on the desks of top commanders is among a raft of new policies the Pentagon is considering to tackle the growing problem of military sexual assault crime, and which Defense Secretary Chuck Hagel could announce as early as next week.

That proposed change, which defense officials say is ordered in a policy memo being finalized, is similar to a measure passed in June by the House of Representatives. Supporters say that by requiring the first general or flag officer in the chain of command to monitor cases, investigations are less likely to go off track at lower command levels and effectively “revictimize” sexual assault survivors.

Though the policies are still being drafted, they drew fire Thursday from a chief congressional critic of the Pentagon’s handling of sexual assault, Rep. Jackie Speier, a California Democrat.

Speier, along with her Senate counterpart Sen. Kirsten Gillibrand, D-N.Y., is pushing for revision of the military justice code that would remove the handling of serious crimes, including sexual assault, from the chain of command in which they occur. Giving oversight to military attorneys rather than commanders, they argue, would increase victims’ confidence in reporting crimes. According to the Pentagon’s own data, a small percentage of sex offenses are ever reported.

But Hagel and other defense officials, supported by influential legislators such as Senate Armed Services Committee chairman Sen. Carl Levin, D-Mich., have come down against weakening command legal authority. The Pentagon itself will create an environment that supports victims without such radical change, defense officials have declared.

At a June Senate hearing, Hagel told Gillibrand, “I don’t think you can fix the problem, Senator, or have accountability within the structure of the military without the command involved in that.”

Some of the policies defense officials confirmed were under consideration are aimed at ensuring cases are handled properly. One would order the DOD’s Inspector General to regularly review closed sexual assault investigations, while another requires that judge advocates serve as investigating officers for Article 32 hearings on sexual assault charges, rather than officers not versed in military legal matters.

Another change would require the military services to agree on common rules to prevent improper relationships between military trainers and new troops. Among the recent scandals that have pushed the issue of military sexual assault to the fore was the revelation that dozens of trainees at Lackland Air Force Base, Texas, were preyed upon in recent years by military training instructors.

Hagel is also reviewing policy changes designed to enhance the standing of victims in military courts, a defense official not authorized to speak publicly on the matter confirmed.

If the defense secretary orders one of the pending policies, each of the services would establish special victims advocacy programs. The Air Force started such a program in January, and provides attorneys independent of both the prosecution and the defense to help victims navigate the military legal process.

The Pentagon also may seek an executive order from President Barack Obama that would give victims of sexual assault the right to participate in the post-trial penalty phase of courts-martial, a common feature in civilian criminal trials.

Speier, while praising Hagel for “willingness to tackle the long-standing, deeply ingrained problem of sexual abuse in our military,” said some of the proposals are promising but ultimately don’t go far enough.

“(O)verall, there is nothing here that will significantly curb sexual predators and their behavior,” she said in a written statement Thursday, “nothing that will guarantee the safety of victims who report abuse, and nothing that will fix the ongoing problems keeping cases inside the chain of command.”