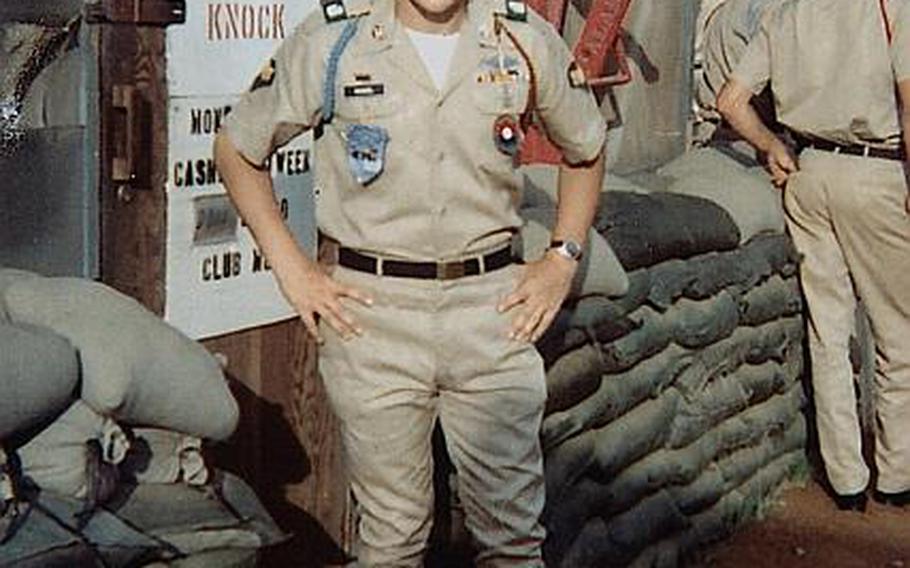 This photo provided by the Library of Congress shows Charles "Chuck" Timothy Hagel in 1968, while serving in the Vietnam War. During the worst year of the war, Hagel served side-by-side with his younger brother Tom as infantry squad leaders with the U.S. Army's 9th Infantry Division in the Mekong River Delta area. He was awarded two Purple Hearts for his courage. (AP Photo/Library of Congress)

WASHINGTON — On Feb. 2, 1968, a 21-year-old American private witnessed his first combat death up close — the sudden, shocking killing of another young soldier by a Vietnamese sniper.

Seeing fellow troops killed in action was an everyday occurrence in a war that claimed more than 58,000 American lives, but the witness that day was Chuck Hagel, who 45 years later, in February 2013, became the nation’s first secretary of defense to have fought in Vietnam.

In a graduation speech at the U.S. Military Academy at West Point scheduled for Saturday, Hagel will honor Capt. Robert George Keats, the 23-year-old West Point graduate and company commander he saw die that day.

Defense officials, who shared portions of a draft of the speech with Stars and Stripes, said Hagel is keen to draw a parallel between the sacrifices of his generation and the idealism of the graduating cadets, who may soon face similar trials in the ongoing war in Afghanistan and elsewhere.

In a speech that will touch on other topics — including defense budget cuts and the military’s problem with sexual assault — Hagel will tell the graduates that, like Keats, they have chosen to enter the military at a defining time for the nation and its military

Keats, who is buried at West Point, arrived in Vietnam in October 1967 and took command of Hagel’s company — B Company, 2nd Battalion, 47th Infantry Regiment — in January 1968. He was shot while rushing to the aid of one of his platoons, according to his biography on a West Point graduates association website:

“Ten days after taking command, Bob’s company went to the aid of one of his platoons that had come under enemy attack. Knowing that a sweep through a nearby hamlet would be extremely dangerous, he asked for volunteers. Twenty of his soldiers willingly went with him, even though he had been in command for only a brief period. As he and the volunteers moved forward, they came under heavy enemy fire. To call in preplanned mortar fire, Bob immediately dashed to his forward observer’s position through a hail of enemy fire. When this supporting fire began, Bob led his men in an assault on the enemy position but was mortally wounded.”

Keats was posthumously awarded the Silver Star for his heroics. Hagel came through physically unscathed, although he would receive two Purple Hearts for combat injuries later in Vietnam. He never shook off the experience of seeing his commander killed, defense officials said, and Keats’ death still weighs in his thinking about when and how U.S. troops should be sent into battle.