Hagel, Kerry at Munich Security Conference say US remains engaged around the world 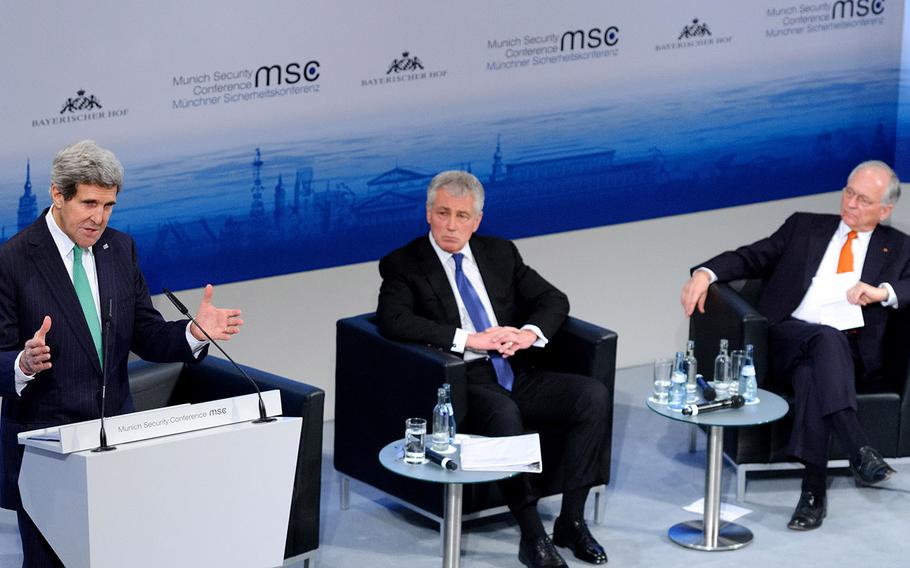 U.S. Secretary of State John Kerry, left, speaks as Secretary of Defense Chuck Hagel and Wolfgang Ischinger look on during the Munich Security Conference. Both U.S. officials energetically refuted concerns by some that the U.S. is “withdrawing” not only from Afghanistan, but into isolationism. (Tobias Kleinschmidt/Courtesy of the MSC)

MUNICH — As NATO winds down its long war in Afghanistan, the U.S. and its allies can’t afford to disengage because new threats and tensions — stretching from the South China Sea and Syria to ungoverned spaces in Africa — will demand a “trans-Atlantic renaissance,” top U.S. officials said on Saturday.

U.S. Secretary of Defense Chuck Hagel and Secretary of State John Kerry both energetically refuted concerns by some that the U.S. is “withdrawing” not only from Afghanistan, but into isolationism.

“I would venture to say, the United States is more present, doing more things in more places today than maybe ever before,” Hagel said during a panel discussion at the Munich Security Conference.

“How we’re doing it is different,” Hagel said. “If that narrative is not getting out there, then maybe that’s our fault.”

Added Kerry: “I can’t think of a place in the world that we are retreating, not one.”

In presentations to the conference, before answering questions, both Hagel and Kerry emphasized the need to reinvigorate the U.S.-European alliance in the face of enormous challenges.

“We are facing threats of terrorism and untamed growth in radical sectarianism and religious extremism,” challenges that are more complex than in the past, Kerry said. “America needs a strong Europe and Europe needs a committed and engaged America. And that means, turning inward is not an option for any of us.”

Hagel said, today, the “most persistent and pressing security challenges to Europe and the United States are global,” emanating from political instability, violent extremism, cyberwarfare and economic disparity among others.

“As we confront these threats, nations such as China and Russia are rapidly modernizing their militaries and global defense industries, challenging our technological edge and defense partnerships around the world,” Hagel said.

“The U.S. sees Europe as its indispensable partner in addressing these threats and challenges, as well as addressing new opportunities,” he said.

Faced with budget constraints on both sides of the Atlantic, the U.S. and Europe must build more joint capacity, and invest more strategically in capability and readiness, Hagel said. “The question is not just how much we spend, but how we spend together.”

Kerry said what’s needed is a trans-Atlantic Renaissance, “a new burst of energy and commitment and investment in the three roots of our strength: our economic prosperity, our shared security and the common values that sustain us.”

“[It] requires that we defend our democratic values and freedoms,” Kerry said. European leaders at the conference echoed the urgency of re-invigorating the trans-Atlantic alliance and finding the political will to adapt as necessary to meet the new post-war challenges.

German Foreign Minister Frank-Walter Steinmeier echoed Hagel in saying the trans-Atlantic alliance is “indispensable.” But, he said through a translator, “partnership does not only live from continuity alone. It needs renewal. It needs expansion.”

Both U.S. and European officials emphasized that they need to devote even limited resources to helping other countries combat extremism.

Kerry said the U.S. and Europe must show leadership, which means “committing resources, even in a difficult time, to make certain that we are helping countries to fight back against the complex, vexing challenges of our day.”

In the wake of the economic downturn that strapped defense budgets in Europe as well as the U.S., American officials have criticized European partners in NATO for not investing enough in defense capabilities.

When asked whether he was as angry as former Defense Secretary Robert Gates, who blasted Europe for investing too little in defense and freeloading on U.S. power, Hagel offered a diplomatic reply.

“Partnership mean partnership,” Hagel said, urging allies to make the necessary investments in their defense. “Everybody has to participate. Everyone has to contribute.”

The U.S. military has been reorganizing to deal with the new threats, Hagel said, and assisting with diplomatic efforts, noting the creation of rapid response U.S. Marine teams in Europe as an example.

The crisis in South Sudan, where U.S. forces helped evacuate citizens and bolster embassy security is the type of flexible force the military needs, Hagel said.

“The rapid availability of nearby forces allowed diplomats to remain on the ground and help broker a ceasefire,” Hagel said. “As our force structure draws down, there will be, there must be, adjustments in our posture to meet new challenges.”