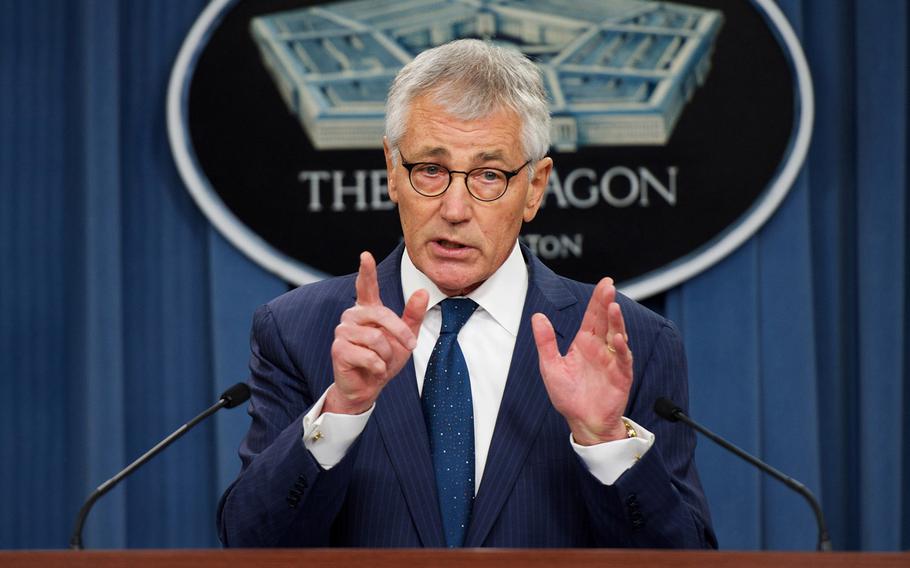 WASHINGTON — Secretary of Defense Chuck Hagel warned Thursday against using body counts as a metric to judge the U.S. campaign against the Islamic State militant group.

For much of the Vietnam War, the U.S. military pursued an attrition strategy and measured success against the Viet Cong and North Vietnamese by adding up the number of enemy fighters killed in action. Body counts were a key feature of after-action reports, and U.S. officials would announce daily tallies.

The strategy largely ignored the political situation on the ground in Vietnam and the United States, and communist forces were able to take over South Vietnam after American leaders withdrew U.S. troops in the face of anti-war sentiment at home.

For months, the U.S. has been waging an air war against the Islamic State in Iraq and Syria. In an interview published Thursday by Al Aribaya News Channel, U.S. ambassador to Iraq Stuart Jones reportedly claimed that more than 6,000 Islamic State fighters have been killed in coalition airstrikes.

Secretary of State John Kerry on Thursday said the strikes have inflicted a lot of damage on the group.

“The measure here is: What are we getting done?” Kerry said after meeting in London with the prime ministers of Britain and Iraq. “We thought it was necessary to meet now to take stock of where we have been in the last months.”

America’s top diplomatic said, “We are taking out [Islamic State] fighters in the thousands thus far” and “50 percent of the top command has been eliminated.”

During a Thursday press conference at the Pentagon, Hagel, a Vietnam veteran, was asked to confirm those figures. He said the number of militants killed was in the “thousands” and “some” of the group’s leaders had been taken out, but he cautioned against reading too much into that.

“I don’t think it is the [definitive] measurement,” he said. “I was in a war where there were a lot of body counts every day, and we lost that war.”

He said it was important to look at other factors, such as: whether the enemy is on the defensive; whether they’re having difficulty recruiting fighters; whether their supply lines have been cut; and whether there been a distortion of their command and control networks.

Hagel said the U.S. and its coalition partners are having success on all those fronts.

“These are also the metrics that you look at as to how much progress you’re making in a war,” he said.

The Pentagon chief also pushed back against criticism leveled by the Iraqi prime minister, Haider al-Abadi, that the U.S. and its foreign partners weren’t doing enough to help his forces.

“The international coalition is very slow in its support and training of the [Iraqi] army,” Abadi told journalists in Cairo last week, according to Al Arabiya News.

He pointed out that the U.S. has provided more than 1,500 Hellfire missiles, 250 Mine-Resistant Ambush-Protected vehicles, and tens of thousands of small arms plus ammunition to the Iraqi security forces and Kurdish peshmerga.

The Pentagon has deployed more than 1,500 troops to Iraq to train, advise and assist Iraqi forces battling the Islamic State, and other nations are contributing trainers as well. Three of the four training camps identified for the effort are up and running, and the fourth will be soon, according to Hagel.

“We have a coalition of over 60 countries that have come together to help Iraq. And I think the [Iraqi] prime minister might want to be a little more mindful of that,” Hagel said.

The head of the Defense Department said that, from a political perspective, it’s the Iraqi government that isn’t moving quickly enough to unite Iraq’s various political and sectarian factions.

“This isn’t about the United States,” Hagel said. “The one defining metric of success” is for Abadi “to form a more inclusive government, to allow all the elements of his country, Sunni, Shia, Kurds, to have … a real role, not just a paper role, in governing.”

That isn’t an easy task, Hagel said, but “the acceleration of that is going to really determine … the future of Iraq.”