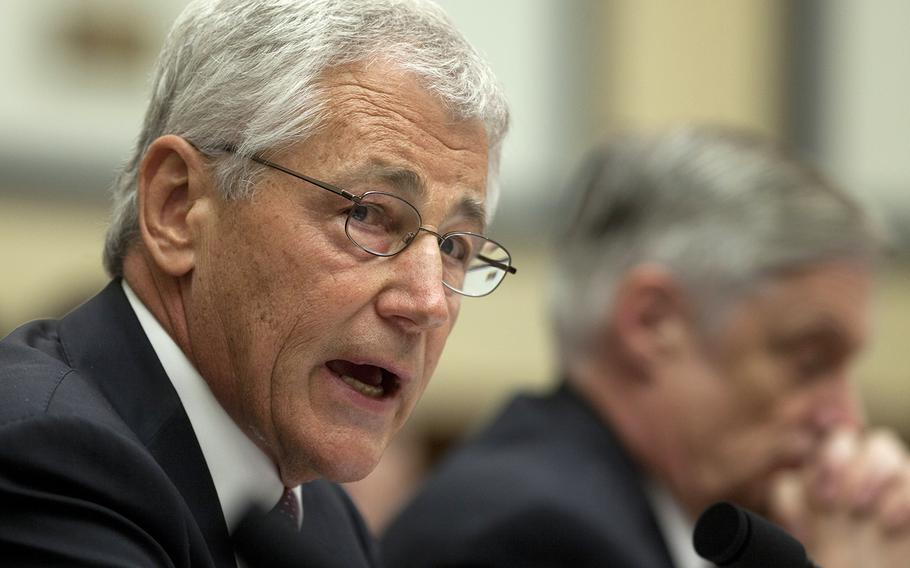 “If there is no action by the Congress, roughly $500 billion in reductions to defense spending would be required over the next nine years,” he said. “As an alternative, the president’s budget proposes some $150 billion in additional defense savings over the next decade when compared with the budget plan submitted last year.”

Rather than focus on sequestration, the committee’s chairman, Rep. Buck McKeon, R-Calif., criticized the president’s plan to cut more defense spending on top of $487 billion in planned spending reductions announced in the 2013 defense budget.

“I am also curious why, after three rounds of cuts to our armed forces in as many years, our troops are again being asked to pay the bill for out-of-control spending in Washington,” McKeon said. “The budget we received asked us to take another $120 billion from the military and offers no solutions to repair the damage being done by sequestration this year.”

Chairman of the Joint Chiefs of Staff Gen. Martin Dempsey said defense budgets are unavoidably falling in a “period of historic fiscal correction.”

The speed and unpredictability of recent defense cuts is what presents the greatest challenges as the Pentagon tries to stay abreast of all national security threats, Dempsey said.

“Our warriors’ will to win is undaunted, but the means to prepare to win are becoming uncertain,” he said.

Rep. Joe Wilson, R-S.C., questioned Hagel on plans in the budget to raise copays and deductibles for Tricare, as well as institute new fees for enrollees in Tricare for Life, Standard Tricare and Tricare Extra.

Noting that Hagel had earlier in the hearing said that projected Tricare costs next year are projected to be 4 percent lower than in 2014, he asked why the increases were needed at all.

“Commitments have been made … why would we be increasing the fees when the program is working well?” Wilson said.

Hagel answered that the increases, which could result in hundreds of dollars of extra costs per year for individuals and families by 2017 were “not significant.” DOD Comptroller Robert Hale said that limited budgets required tough choices.

“We save about a billion dollars from the Tricare fees and copays,” Hale said. “If we don’t do it, we will have to take that out of readiness or modernization.”