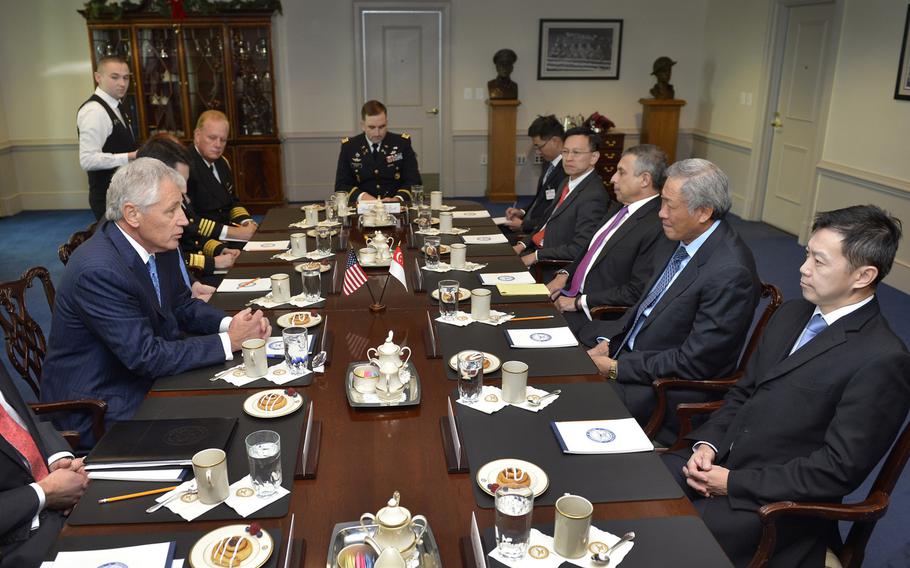 The pending deal, which could restore about $30 billion of funds due to be cut by sequestration over the next two years, doesn’t solve all of DOD’s money problems, Hagel said, but the budgeting certainty it provides will greatly improve defense planning.

“This is an important signal to our partners and our allies around the world — that we are going to come together as a country, as a Congress, and make some tough choices and decisions and commit resources where we have to commit them,” Hagel said. “And it clearly, in that process, reassures those around the world that we will stay committed to our allies and our interests.”

Singapore Defense Minister Ng Eng Hen called the U.S. presence in Singapore and elsewhere in the region “a critical force of stability and progress.” In a joint statement, the two announced — as reported in Stars and Stripes on Wednesday — another littoral combat ship would be deployed in late 2014 to Singapore. A third will sail to the tiny nation in 2015.

Hagel repeated in the wide-ranging news conference that the United States does not recognize China’s recently announced air defense zone in the East China Sea around a string of disputed island that Japan and China both claim. Hagel also urged China to refrain from setting up any more such zones in the region.

On the subject of the Syrian civil war, Hagel said the U.S. military was still assessing the situation surrounding depots of non-lethal U.S. aid feared to have been taken over by Islamist rebels.

The United States has cut off non-lethal aid to moderate rebel groups as a result, to prevent U.S. materiel from falling into the hands of what he called “very dangerous elements.”

“It’s not a matter of an easy choice between the good guys and the bad guys here,” Hagel said.