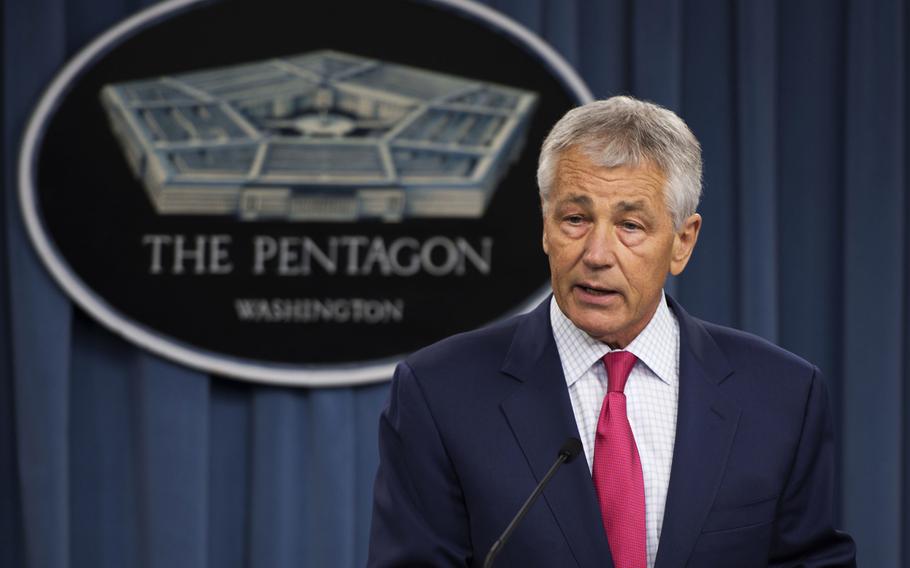 Secretary of Defense Chuck Hagel speaks at a Pentagon press briefing on March 15, 2013. (Erin A. Kirk-Cuomo/Department of Defense)

But arming moderate rebel groups is only one of a number of options on the table, said Hagel, who hewed to the cautious tone President Barack Obama has set on Syria during a joint Pentagon appearance with British Defense Secretary Philip Hammond.

“You look at and rethink all options; it doesn’t mean you do, or you will,” Hagel said.

Hammond said a European Union ban currently prevents Britain and other countries from arming the rebels. The ban is set to expire at the end of the month, however.

“We’ve kept all our options open,” Hammond said. “We have not thus far provided any arms to the rebels, but we’ve never said it’s something we will not do.”

“We don’t have a chain of custody that establishes exactly what happened,” he said of the physical evidence for the use of deadly sarin gas.

Hammond told reporters at the Pentagon that physical samples suggesting Syrian use of chemical weapons don’t meet the standard of evidence needed to take action. But, he said, future uses of the weapons could provide the necessary evidence. That fact should be taken as a warning to the Syrian regime not to consider using its extensive chemical arsenal in the Syrian civil war, he said.

The British public is keenly aware faulty evidence on weapons of mass destruction can lead to long and costly wars, Hammond said.

“U.K. public opinion remembers the evidence we were presented with in 2003 around Iraq, which turned out not to be valid,” he said. “There is a very strong view that we have to have very clear, very high-quality evidence before we make plans and act on that evidence.”