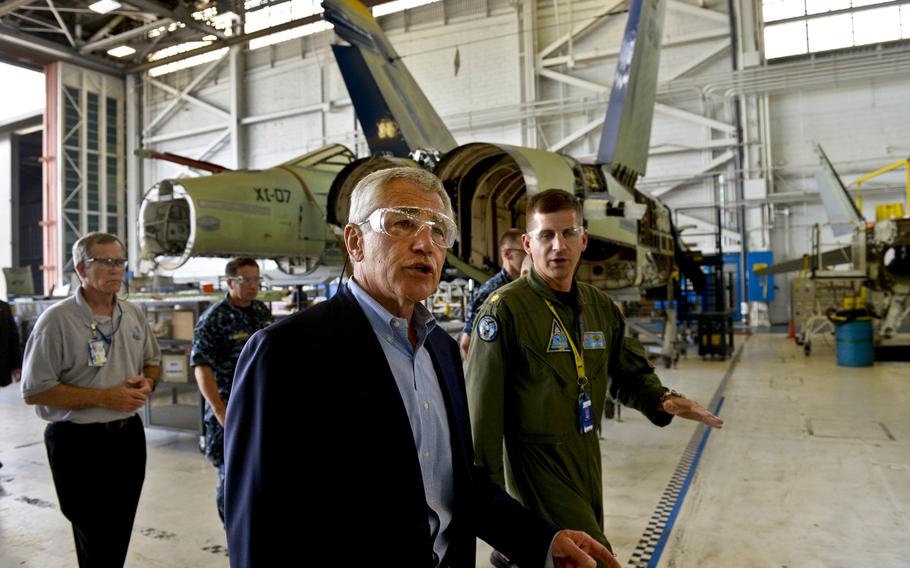 Secretary of Defense Chuck Hagel is given a tour of the Fleet Readiness Center on NAS Jacksonville, Fla., July 16, 2013. (Glenn Fawcett/Department of Defense)

WASHINGTON — With combat winding down, troop numbers dropping and budget uncertainty mounting, Defense Secretary Chuck Hagel’s announcement Tuesday that he plans to cut thousands of positions in Pentagon headquarters staffs may have made a splash, but defense experts said it will take a steady exercise of will on Hagel’s part to ensure it happens.

During a visit to Naval Air Station Jacksonville, Fla., Hagel said he would direct staffing cuts of 20 percent in the Office of the Secretary of Defense, the Joint Staff and in the headquarters of the service branches.

The cuts will be implemented in the 2015-2019 budgets, and could save up to $2 billion, Pentagon press secretary George Little said. Cuts of that magnitude aren’t an answer to sequestration cuts that could quash $500 billion in planned Pentagon spending over a decade. Little said the reduction plan — which arose from the a recent strategy and management review ordered by Hagel — will happen even if Congress passes a budget that de-triggers sequestration.

Military leaders and outside observers alike have long pointed out a need to reduce bureaucracy and improve “tooth-to-tail” ratios as headquarters staffs both in the Pentagon and at regional combatant commands have ballooned, but such observations aren’t new.

When it comes to controlling staff sizes, efficiency moves by recent secretaries including Donald Rumsfeld and Robert Gates came to naught as personnel counts continued to balloon.

“It’s one thing to announce this, but another thing entirely to make sure it happens,” said former assistant secretary of defense Lawrence Korb, now a senior fellow at the Center for American Progress, a left-leaning Washington think tank. “Gates said he would cut the number of generals and admirals, but when he left there were more.”

Even with the reality of a declining defense budget, streamlining a Pentagon bureaucracy acclimated to growth, not shrinkage, will require a laser-like focus by Hagel and Deputy Defense Secretary Ash Carter, he said.

“I think there’s a growing realization within OSD and within Congress that this area is ripe for cutting, because OSD and the Joint Staff have grown so dramatically in the last few years,” said Todd Harrison, senior fellow at the Center for Strategic and Budgetary Assessments, a Washington think tank.

According to an analysis last month by Gannett-owned Defense News, the Joint Staff more than tripled to 4,244 workers from 2010 to 2012. Meanwhile, a Government Accountability Office study this year showed that spending more than doubled in regional combatant commands from 2007 to 2012, while staff was up 50 percent since 2001.

“I think for most defense analysts, this is something that’s long overdue, and I think [Hagel] will have a lot of support in this,” said Shawn Brimley, vice president and director of studies at Center for a New American Security, a Washington think tank with close ties to the Obama administration. “The growth of the OSD enterprise in particular over the last 10 to 12 years has been pretty remarkable.”

Korb said that simply reducing the number of Pentagon officials would be of greater benefit than the cost savings, because a leaner Pentagon can enact military strategy more efficiently.

“We won the Cold War with much smaller staffs,” he said. “The processes now have just become too cumbersome, with too many people involved… Where you used to have an assistant secretary, now you’ve got an under secretary and an assistant and a principal deputy assistant.”

Officials say it will take time before deep headquarters cuts start to be felt. A defense official speaking on the condition of anonymity Wednesday said the individual components subject to the 20 percent cut will have some leeway to phase in cuts in their own way over the five-year period, with some potentially opting for up-front cuts, while others might rely more on attrition or enact cuts later.

Given DOD’s history of failing to move tofollow through on promised cuts, experts said that starting sooner rather than later could create momentum and begin saving money sooner.

“It begs the question: If you’re going to propose it next year, why not go ahead and start implementing cuts this year?” Harrison said.

How the cuts are implemented may determine if they’re helpful; Brimley said he hopes cuts don’t follow a “last in, first out” template, stripping the Defense Department of dynamic young leaders of the future and leaving it with an overabundance of entrenched bureaucrats.

Harrison added that the headquarters reductions should not follow the model established by Gates’ elimination of Joint Forces Command, an efficiency measure that resulted in less efficiency than it should have because many employees simply moved and enlarged other parts of the Defense Department.

“If they cut the Joint Staff by 20 percent, it doesn’t save any money if the military and civilian employees just go back to their home services,” Harrison said. “They have to follow up by cutting end strength and civilian head count of each service proportionally.”