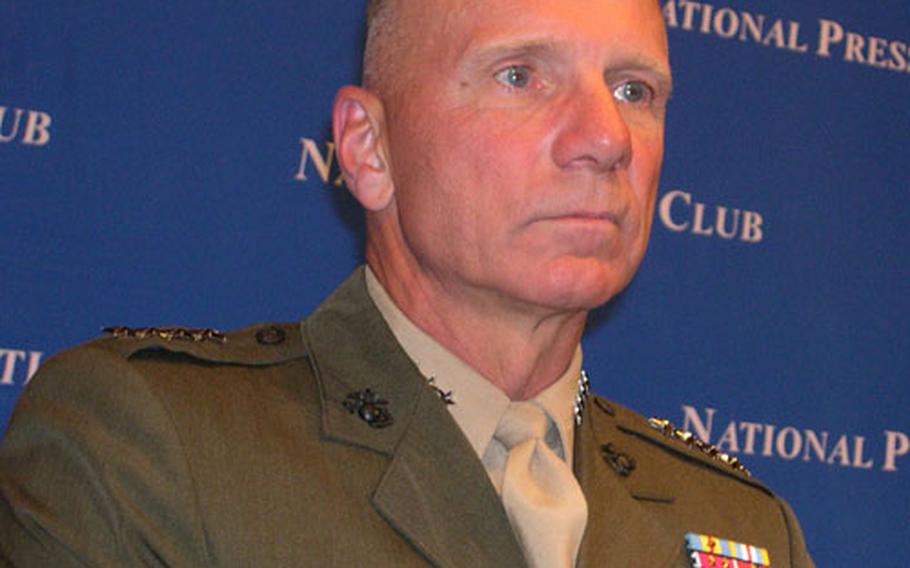 Marine Corps Commandant Gen. Michael W. Hagee speaks about the state of the Marine Corps to a crowd of about 200 people at a luncheon held at the National Press Club on Monday in Washington, D.C. (Carlos Bongioanni / S&S)

WASHINGTON &#8212; The Marine Corps is developing plans to strike in force deep within war zones without having to use other countries as staging areas, as happened in Kuwait prior to the invasion of Iraq, the Corps&#8217; commandant, Gen. Michael W. Hagee, says.

Speaking at the National Press Club in Washington, Hagee recapped what the Marine Corps has done the past few years in the global war against terror. He also outlined the role the Corps will play in years to come.

Just over a year after the November 2001 operations in Afghanistan, some 70,000 Marines and sailors from ships in the Persian Gulf, went ashore in Kuwait to support Operation Iraqi Freedom.

A key strategy the Navy and Marine Corps are trying to develop, Hagee said, is the ability to place forces deep within enemy territory, within 10 to 12 days &#8212; up to 15,000 Marines with all the equipment and logistical support needed to sustain combat operations.

The arrival and assembly of Marines, their equipment and supplies would occur aboard ships at sea and then there would be &#8220;selective off-loads &#8221; from sea to specific sites ashore.

A smaller version of the concept worked well in Afghanistan, Hagee noted. Two months after the Sept. 11, 2001, terrorist attacks, he said the Marines were the only force ready to launch a large-scale ground attack from inside Afghanistan against Taliban and al-Qaida forces.

&#8220;We projected combat power 400 miles,&#8221; to get some 4,000 Marines aboard ships in the Arabian Sea ashore inside landlocked Afghanistan, Hagee recounted. &#8220;Prior to that, our doctrine said we could project power ashore from the sea only about 200 nautical miles.&#8221;

Hagee said one of his major concerns as commandant of the Marine Corps is providing the capabilities that joint-force combatant commanders need, &#8220;much more rapidly than we can today.&#8221;

To beef up capabilities, the Navy and Marine Corps have, over the past few years, developed expeditionary strike groups, Hagee said. These are the old amphibious ready groups and Marine expeditionary units, but they have added destroyers and cruisers, as well as a submarine. The entire group trains together and deploys together.

&#8220;The combatant commander likes them a great deal. ... They bring more strike capability and additional intelligence, surveillance and reconnaissance capabilities. They come as a complete package, and he can use them wherever he wants.&#8221;

But one problem with the strike groups, especially those deploying from the West Coast, is it takes up to 45 days to get to Central Command&#8217;s area of operation in the Arabian Sea or Persian Gulf. And it takes another 45 days to return home.

To address that concern, the Navy and the Marine Corps have been experimenting with a concept called sea swap. The idea is to leave the ships and their equipment in the theater where they are needed and rotate sailors and Marines in and out.

&#8220;But it&#8217;s never been done on a large deck, like ... [an amphibious assault ship] or carrier, and it&#8217;s never been done for a large number of ships at the same time. ... We&#8217;re going to experiment with it over the next year or so, because if we can be successful, we can provide more capability for that combatant commander ... simply by keeping those platforms forward deployed.&#8221;