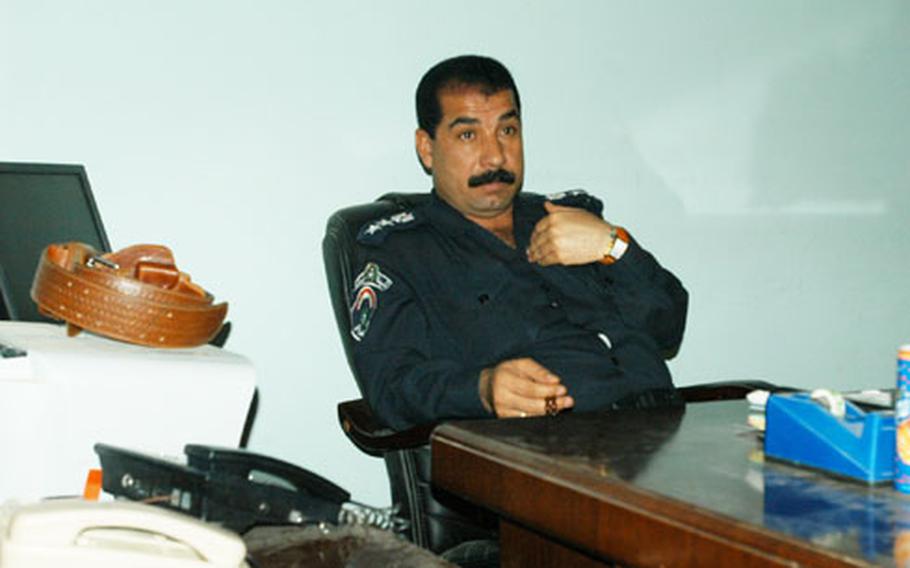 HADITHA, Iraq &#8212; Some describe Haditha&#8217;s police chief, Col. Faroq Taih Hardan, as a heroic figure, and one of the only Iraqis in Haditha willing to stand up to insurgents at the height of violence in the region.

Others describe him as a strongman who ignores local laws and uses bullying tactics to advance his own position.

Faroq took charge of Haditha&#8217;s police force in 2006, but helped lead the fight against insurgents in the area much earlier than that.

In November 2004, Faroq said, insurgents took over Iraqi police stations in Haditha and its suburbs, effectively gaining control of the city and keeping Iraqi police from working.

"They killed a lot of civilians," Faroq said. "Haditha was a hard spot and people couldn&#8217;t live here anymore."

Faroq and three others who wanted to fight insurgents met with Marines and Special Forces soldiers in Kirkuk and offered to help.

U.S. forces asked Faroq to send 25 people to police training in Baghdad to form the core of a group that would reestablish police forces in Haditha.

Faroq was able to send 21. Of those, all but nine quit in fear of repercussions from insurgents. Of the nine that remained, including Faroq&#8217;s brother, all were rounded up and beheaded by insurgents, Faroq said.

In July 2006, Faroq and three others returned to Haditha to once again try to reestablish the police force.

Despite the difficulties, with the help of coalition forces, Faroq was successful in helping to resecure the city.

Faroq said coming back to the city, even with minimal staffing and resources, was a psychological victory against insurgents.

"Insurgents pushed the city to a point where they thought they&#8217;d never have police again," Faroq said. "I started to give the civilians hope someday they would have police."

Faroq eventually grew his police force to include 672 Iraqi police and 400 members of provincial security forces.

Now that security has improved, however, some say Faroq needs to get out of the old way of doing things.

Several officials said Faroq authorizes searches without warrants, bullies suspects for information and ignores the needs of the other municipal offices.

"He&#8217;s definitely a gunslinger. But now that it&#8217;s calm and quiet now he&#8217;s trying to re-establish himself as a democratic leader. He is struggling to identify with democratic police leadership," said Capt. Scott Newton, commander of Police Transition Team 1.

"He needs a lot more training and guidance. He&#8217;s not doing anything outside the scope of historical Iraqi procedure but according to Iraqi law he&#8217;s outside the box."

When asked if he thought Faroq was corrupt, Newton had to qualify his answer.

"By Iraqi standards, no," he said.

Faroq denied Newton&#8217;s assessment, saying he and the rest of his police department are eager and willing to make the transition to a more civilian-friendly force, but says the change won&#8217;t come overnight.

"There&#8217;s distance between these two points, between being fighters and being police," Faroq said.

"You have to recognize the environmental situation and hazards, and know we might need to fight again."