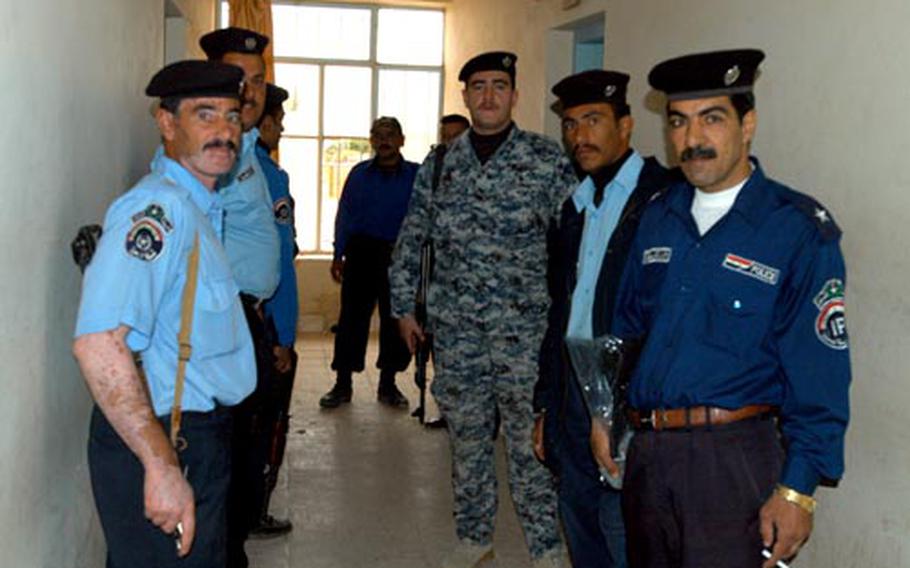 HADITHA, Iraq &#8212; Poor logistical support, struggles to decentralize command and possible corruption are among the things that frustrate Police Transition Team 1 as they struggle to transform Haditha&#8217;s police from the paramilitary force that once battled insurgents in the streets to a community police force that can work with the public.

Fogleman has been spending six days a week at the Haditha police station trying to help Iraqi police put together and maintain a system for ordering and keeping track of supplies ranging from furniture to ammunition. He said he&#8217;s frustrated over the difficulties in obtaining supplies from provincial authorities.

He&#8217;s not the only one experiencing difficulties.

Staff Sgt. Kevin Mayers, also of PTT 1, found himself with little to do Wednesday after a power outage left him without a computer to help Iraqi police work on administrative tasks. Even when the computers are working, he said, the police station has no Internet service and communications are often handled by phone, radio or runner.

Others responsible for advising Iraqi police on training complain they are told there&#8217;s no money for training materials, or to pay the department&#8217;s training officer.

Iraqi police blame early decisions made by the coalition government for many of their bureaucratic problems, saying the dissolution of existing security forces in 2004 left border and prisons open with no law enforcement, and scrapped military and police agencies with 80 years of experience in favor of starting from scratch.

"There are times when getting something as simple as a morning report is absolutely cosmic," he said.

Newton said many of the problems come from building a police force up from nothing to about 28,000 people Iraq-wide in just two years, then "putting logistics after the fact."

Among his goals for police are solid communication between district and local police stations, and a working monthly budget.

While some struggle with the bureaucracy, others rant about the behavior of the police themselves, saying police take merchandise from local merchants without paying, bully people for information, conduct searches and arrests without warrants and illegally detain suspects without cause.

Iraqi police say they&#8217;re trying to reconcile the improved security situation with the fact that the insurgency isn&#8217;t entirely dead.

"For the last few months we have been trying to change from fighting bad guys to policing," said Haditha&#8217;s police chief, Col. Faroq Taih Hardan. "But we still have the fear that the insurgency could re-emerge."

Faroq said no misconduct was taking place and that all of the Iraqi police&#8217;s actions were in accordance with Iraqi law and court instructions.

While insisting police conduct is generally good and the situation is improving, PTT 1 representatives also admit some misconduct may take place, but there&#8217;s little they can do about it.

"This is their country and providing security for it is their responsibility," Newton said. But, he added, "A strong objection goes a long way because of our background."

Since the Iraqis assumed security control of Anbar province on Sept. 1, U.S. forces have been trying to maintain a hands-off approach with local government, while acting in an advisory capacity. At times, the best they can do is pull support away completely.

Newton cited a case where Iraqi Police tried to take over the local nursing school &#8212; one of only three in the country &#8212; to use as a police station.

Using a letter from the Iraqi parliament authorizing security forces to take over any building once owned by the Ba&#8217;ath Party, Faroq told Newton during an October detainee release that the decision had been made and it was final.

Newton responded by pulling his team from their roles in assisting the detainee release until Faroq changed his mind.

The nursing school stayed open, but it wasn&#8217;t the last time police tried to use the letter from parliament to forcibly take a building.

In August, police detained two men who had rented a house owned by the Ba&#8217;ath party in an effort to take their home. After a local judge determined police couldn&#8217;t evict them from their home, they were released. The two were arrested again in mid-October on suspicion of being Ba&#8217;ath party members.

Despite the problems, Newton insists the police are progressing. He described many Iraqi police as "almost at American standards," and said the local people have generally come to trust them.