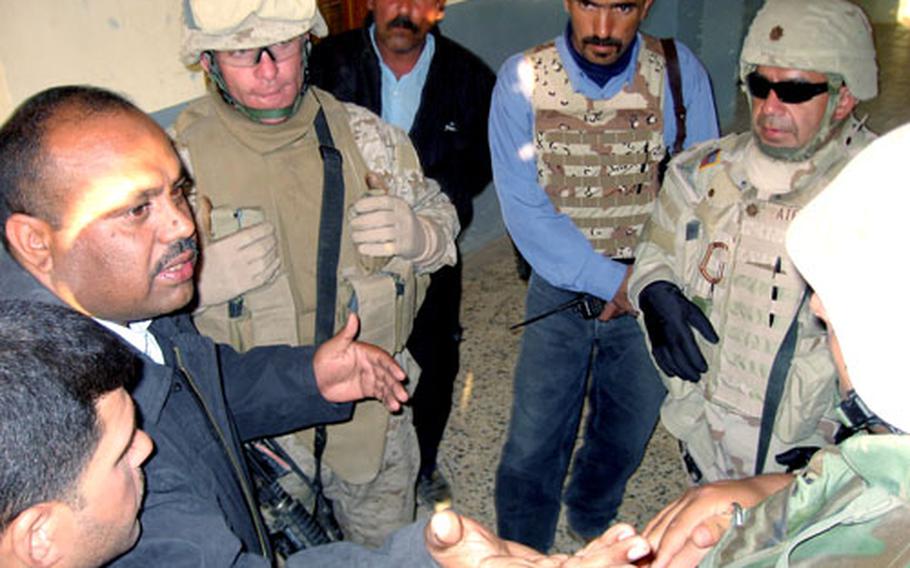 Capt. Ghanem Jasim, left, of the Habbaniyah police district in Iraq, speaks to Marine Lt. Col. Bob McCarthy, second from left, and Army Maj. Gregory Atencio, with sunglasses, at the Civil Camp Police Station in Habbaniyah on Friday. McCarthy and Atencio are with Police Transition Team 6, which advises Iraqi police in part of Anbar province. Jasim explained the problems he has experienced with hiring police officers. (Charlie Coon / S&S)

Capt. Ghanem Jasim, left, of the Habbaniyah police district in Iraq, speaks to Marine Lt. Col. Bob McCarthy, second from left, and Army Maj. Gregory Atencio, with sunglasses, at the Civil Camp Police Station in Habbaniyah on Friday. McCarthy and Atencio are with Police Transition Team 6, which advises Iraqi police in part of Anbar province. Jasim explained the problems he has experienced with hiring police officers. (Charlie Coon / S&S) 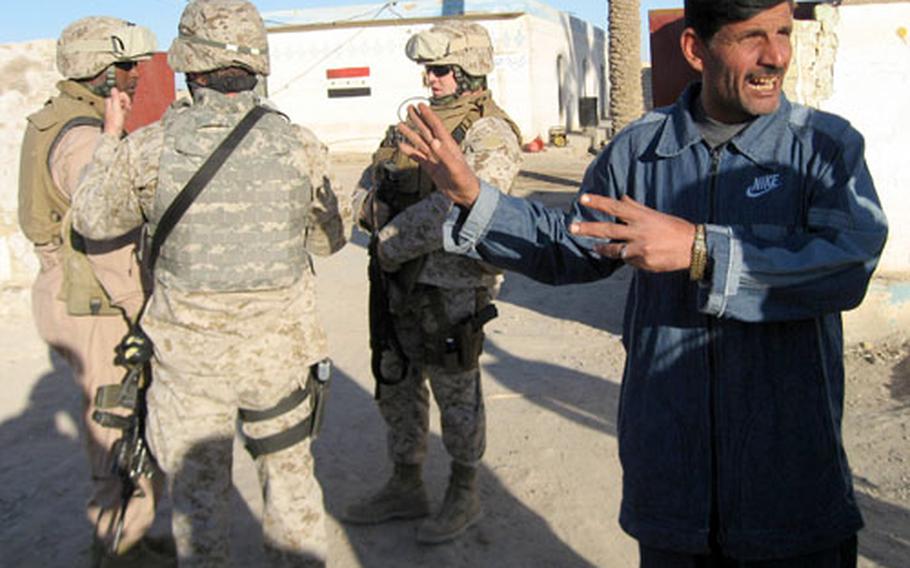 Sgt. Maj. Jasim Shihab, right, of the Habbaniyah Police District, gestures toward the spot where his former boss, Capt. Ali Hussein, was killed in crossfire in August while thwarting a dual car-bomb, suicide bomber attack at the Civil Camp Police Station in Habbaniyah. (Charlie Coon / S&S) 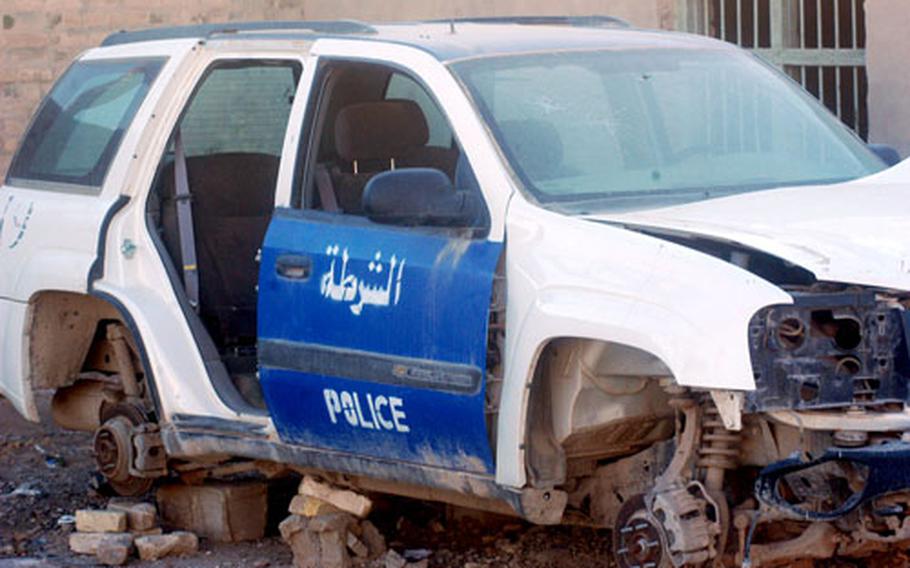 A police car damaged in an attack sits on blocks next to the Habbaniyah Police District&#39;s Civil Camp Police Station in Habbaniyah, Iraq. It is one of several mutiliated police cars waiting for repair or disposal in Habbaniyah. (Charlie Coon / S&S)

HABBANIYAH, Iraq &#8212; The police captain in Habbaniyah was gunned down in August while thwarting an attack on his station by both a suicide bomber and car bomber.

Two years earlier, the police station in nearby Khalidiyah was blown up.

Protect and serve? For these cops, sometimes it is more like duck and survive.

But somehow, in a place where venturing outside fortresslike stations can be life-threatening, the Iraqi police of Habbaniyah are moving forward.

They are being helped by Police Transition Team 6, which is trying to teach members of the fledgling force to serve people and community rather than themselves and the government. It&#8217;s slow going.

More than 500 officers headquartered in Habbaniyah work the 20-mile stretch between the cities of Ramadi and Fallujah, two insurgency strongholds in Anbar province.

The transition team, a small unit of Marines, soldiers and civilians, has provided the police with security such as traffic barriers, concertina wire, and walls around Habbaniyah&#8217;s three police stations.

The headquarters is a windowless, pockmarked, two-story building inside a large, dirt lot. Inside, many rooms are piles of rubble and trash.

A contractor is being lined up to fix the place. Work would start in December or January, God willing, as the Muslims like to say.

By Western standards, the Habbaniyah police lack basics, such as utilities and phones that work, ways to pay their bills, even food and toilet paper. Some don&#8217;t know how they&#8217;ll get to and from work each day.

The transition team, which stood up in August, is essentially starting from scratch.

&#8220;[They need] the basic needs to function as human beings, let alone as an organization within a society,&#8221; said Marine Lt. Col. Bob McCarthy, the transition team&#8217;s commander.

As the U.S. troops approached the police headquarters Friday, one young cop on guard duty saw the Americans coming and scrambled to tuck in his shirt.

The police are inching forward.

Unlike Iraqi soldiers, who are assigned to units away from their home areas, the Iraqi police go home at night. They and their families are unprotected. Most have a pistol or AK-47 rifle, but not the protective armor, high-powered weaponry or anonymity of the army.

Some declined to give their name or allow their photos to be taken.

One officer said he&#8217;s trying to please God by helping his town. He then referred to the obvious schism between the insurgents and their prey.

The police&#8217;s biggest need might be getting fuel for their cars.

Both the military and police said there is a problem getting assets such as fuel, personnel and money to local police forces from Baghdad&#8217;s Ministry of Interior.

&#8220;These are problems as you are trying to establish a government that is decentralized in nature,&#8221; McCarthy said. &#8220;Trying to get the system to work, you&#8217;re going to go through growing pains.