Haarlem: Take me out to the honkbal game 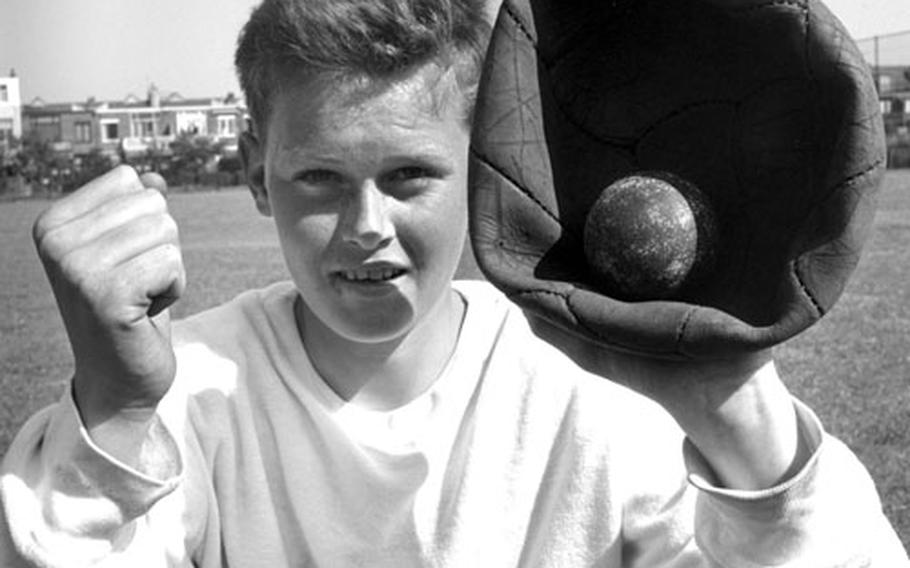 Buy Photo
An old soccer ball serves as a catcher&#39;s mitt for a baseball player in the Netherlands in 1961. (Gus Schuettler / ©Stars and Stripes)

Buy Photo
An old soccer ball serves as a catcher&#39;s mitt for a baseball player in the Netherlands in 1961. (Gus Schuettler / ©Stars and Stripes) 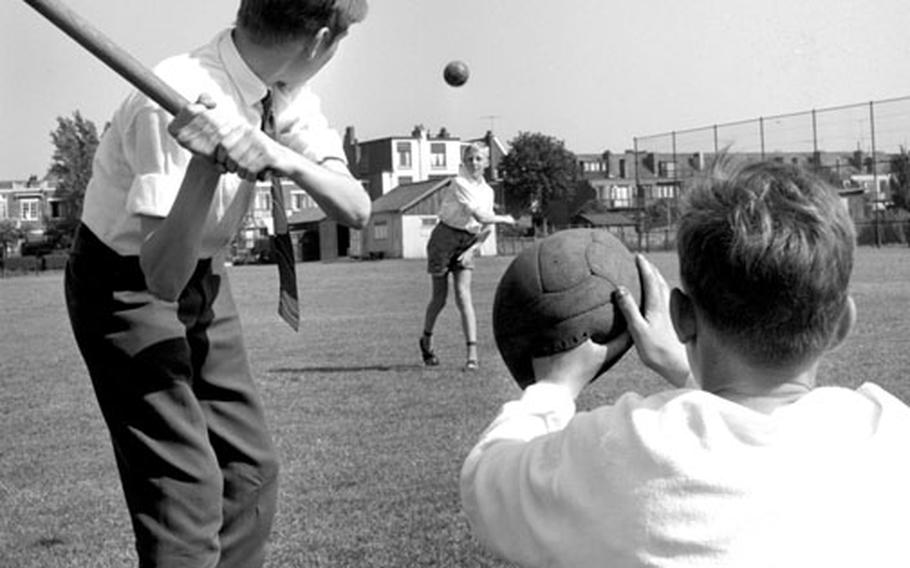 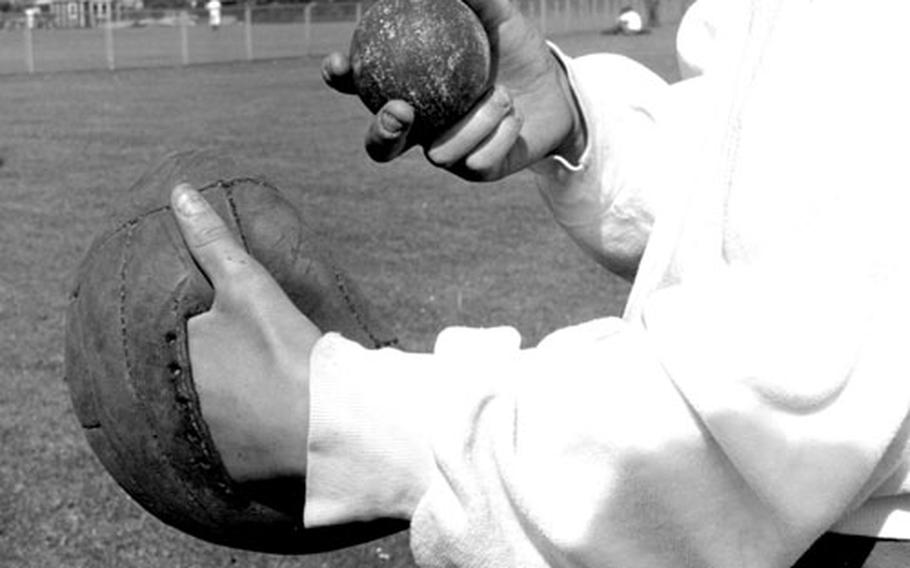 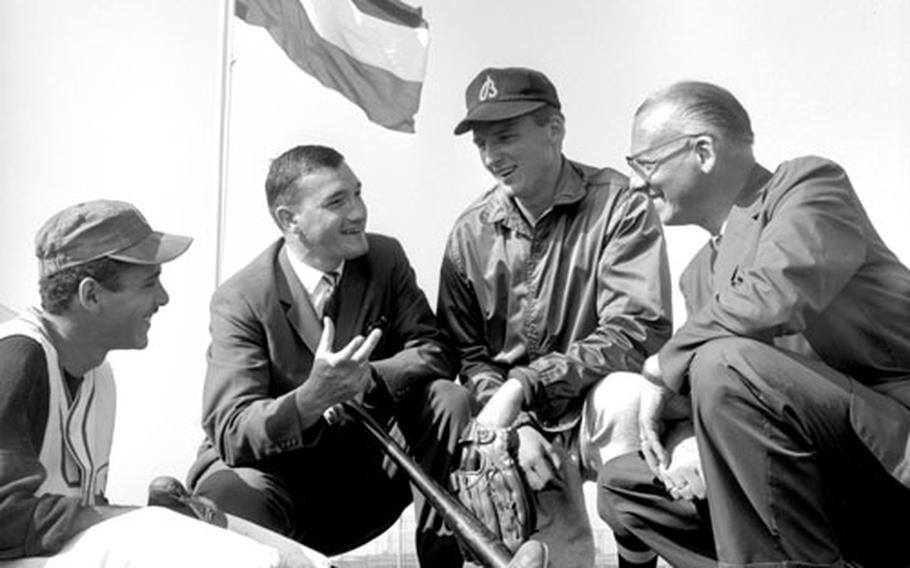 Buy Photo
, second from left, holds court at Haarlem. After coaching in the Netherlands, Fraser went on to the University of Miami, where his teams won 1,278 games and two national championships. (Gus Schuettler / ©Stars and Stripes)

THEY CALL it honkbal in Holland, and the Dutch have really taken to the old ball game.

Go to any of the six regulation diamonds around the land of dikes and bikes and you're bound to hear someone screaming "Vermoordt de scheidsrechter."

Ask why they want the poor ump dead and the fans will tell you that the last throw from the werper to the achtervanger should have been called a wyd instead of a slag ... or maybe vice versa.

But any way you look at it, Abner Doubleday would have no regrets over the hit that baseball has made with the Netherlanders.

One reason the Dutch like the game, of course, is that they have been the European champs since 1956.

Haarlem is considered the center of Dutch honkbal &mdash; honk means base &mdash; and the first baseball team in Holland was founded in Haarlem on June 6, 1923.

Of course there are some proud Netherlanders who claim that baseball actually started in their country back in the 18th century in Beijerland. According to their story the game was called slagbal and it involved hitting a ball with a stick. Many Dutchmen were sailing to New Amsterdam in those days and were supposed to have taken the game over to the New World with them.

But Jan Hartog, the Ford Frick of Holland, discounts this story. And Ron Fraser, the 28-year-old American baseball pro hired to coach Holland's teams, points out that you could probably trace the great American pastime back to the ancient Egyptians.

However baseball began, a Dutchman named J.C.G. Grase brought the modern version to Holland in 1912.

Grase was a schoolteacher who was searching for another sport to introduce to his students. He discovered baseball on a visit to the States.

In 1930 there were only 200 players who batted the ball around the soccer fields of Amsterdam and Holland. But in 1934 the game went international in Europe, when a match was played between Holland and Belgium in Haarlem.

By the beginning of World War II, The Netherlands boasted 1,500 players and 30 clubs.

During the war, recalls Hartog, equipment was very hard to get. "We used a cork ball, which usually broke into pieces when it was hit. But the guy who caught the biggest piece had the ball according to our rules."

Honkbal got down to serious business in 1952 when Queen Juliana formed the Royal Dutch Baseball Association. By then Holland had 200 teams and 3,000 players.

Meanwhile other European countries were getting interested in the game and in 1954 the European Baseball Federation was founded.

In 1956 Holland joined it and won the international championship, which is played every two years in a different country.

Holland has won three championships in a row.

Today the little country has 7,000 registered players, 350 teams and 150 Babe Ruth clubs. A Little League association is being formed this year.

There is no professional baseball and most Netherlanders learn the game by joining a club.

The U.S. is considered the mecca of baseball and besides games with visiting sailors the Hollanders also play occasionally with USAFE teams..

Fraser maintains that baseball is more popular in Holland than soccer is in the U.S. and at least two Dutch ball players have had offers from American clubs.

Hannie Urbanus, 34, has his picture hanging in the Hall of Fame as the first Dutch ball player to visit the U.S. He turned down an offer from the New York Giants in 1952, because he was married with a family and had a good job as an accountant.

But Dutch Army Sgt Herman Beidschat, 20, of Haarlem, is going to the States when he leaves the service next year. Considered the best pitcher in Europe, Beidschat practiced with the Pittsburgh Pirates while on a U.S. visit and has been asked by that ball club to look them up after his discharge.

One major problem of Dutch baseball is getting equipment since it is all made in the U.S. and import taxes are high.

If a ball splits open, it goes to a shoemaker for repair. If a player hits a foul or a home run into the stands, the game stops until the ball is retrieved.

Otherwise the game is played American style and everybody loves it. Haarlem is building the first baseball stadium in Europe and while no one expects baseball to replace soccer, that great American sport definitely has gone Dutch.