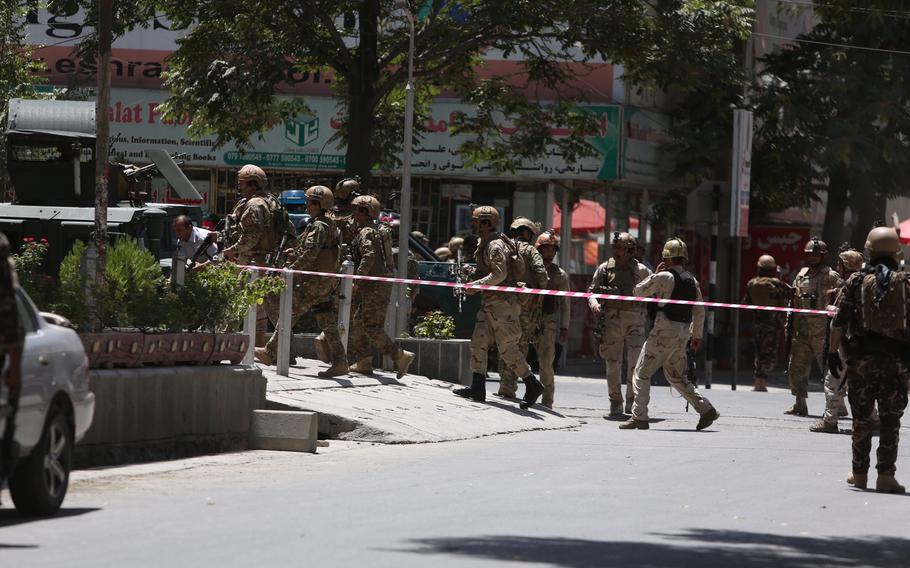 Afghan security forces arrive at the site of complex attack in Kabul, Afghanistan, Monday, July 31, 2017. Afghan police say a car bombing has targeted the Iraqi Embassy in central Kabul, followed by gunfire, and that the attack is still underway. (Rahmat Gul/AP)

KABUL, Afghanistan — A four-hour siege of the Iraqi Embassy in downtown Kabul ended Monday afternoon with Afghan security forces killing three attackers who had holed up in the mission, officials said.

The attack began shortly before noon, when a terrorist blew himself up near the embassy gates and the gunmen stormed the grounds.

It was initially reported that the blast was caused by a suicide car bomb, but later reports said the suicide bomber was on foot.

“It is a terrorist attack,” he said. “There is no threat to the ambassador and the employees of the embassy; they were taken to a safe place.”

The embassy’s charge d’affaires was relocated to the Egyptian embassy, said Ahmed Jamal, a spokesman for the Iraqi Foreign Affairs Ministry, on Twitter.

Attempts to rescue two embassy staff members were still underway, he said hours after the attack was first reported.

Danish said one police officer was wounded in the attack, but none of the Iraqi embassy staff had been harmed. The compound suffered extensive damage and had its windows blown out, the Interior Ministry said.

The Islamic State claimed responsibility in a statement.

The raid may have been meant as a show of strength despite the group’s recent losses in Iraq, where security forces have completed the recapture of the country’s second-largest city, Mosul. Earlier this month, the embassy in Kabul held a press conference to celebrate Iraqi forces’ victory over the terrorist group.

It’s unclear whether they were embassy staff or civilian bystanders. Blasts often create wounds from flying glass and other debris far from a blast site.

“The staff heard a huge blast and gunshots,” Palma said. “The embassy is not so far from our hospital.”

Shar-e-Naw is among the Afghan capital’s wealthiest neighborhoods. Many of its streets are lined with shops and restaurants. The area is home to several foreign missions and government offices.

In a statement, the Afghan Foreign Affairs Ministry said the “wild terrorists have once again removed the masks from their rude and cruel faces and shown that they do not obey any human laws.”

Kabul has been one of Afghanistan’s deadliest cities for civilians so far this year. The security situation in the country has deteriorated, with Taliban militants and ISIS terrorists carrying out bloody attacks targeting the Afghan government or its foreign backers.

Gen. John W. Nicholson, U.S. commander of the NATO mission in Afghanistan, praised the Afghan National Defense and Security Forces for their response to the attack, saying the international coalition is “proud to serve alongside them.”

He also condemned the ISIS offshoot in Afghanistan, known as ISIS-Khorasan Province or ISIS-K, for the assault.

“ISIS-K seeks only to destroy a peaceful future for the people of Afghanistan,” Nicholson said in a statement. “They failed in this attack and they will be defeated.”