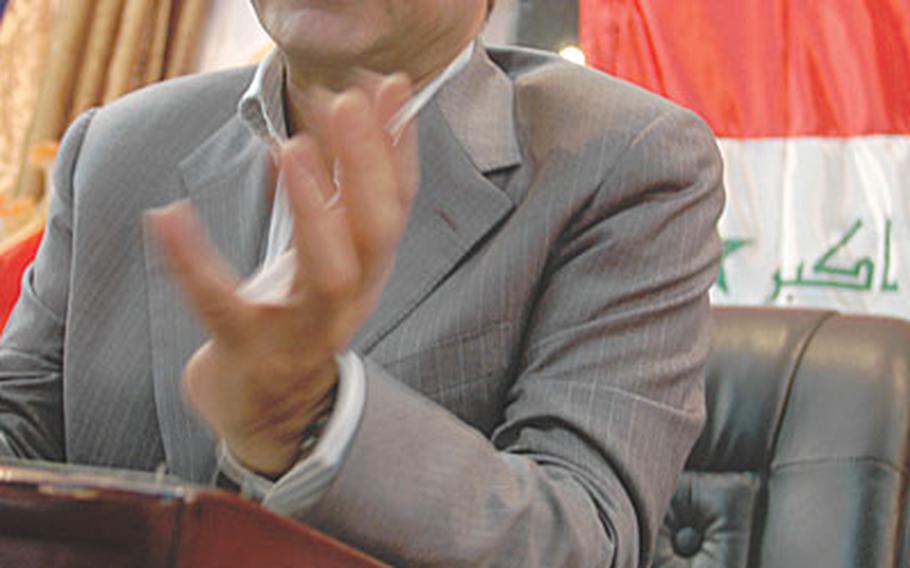 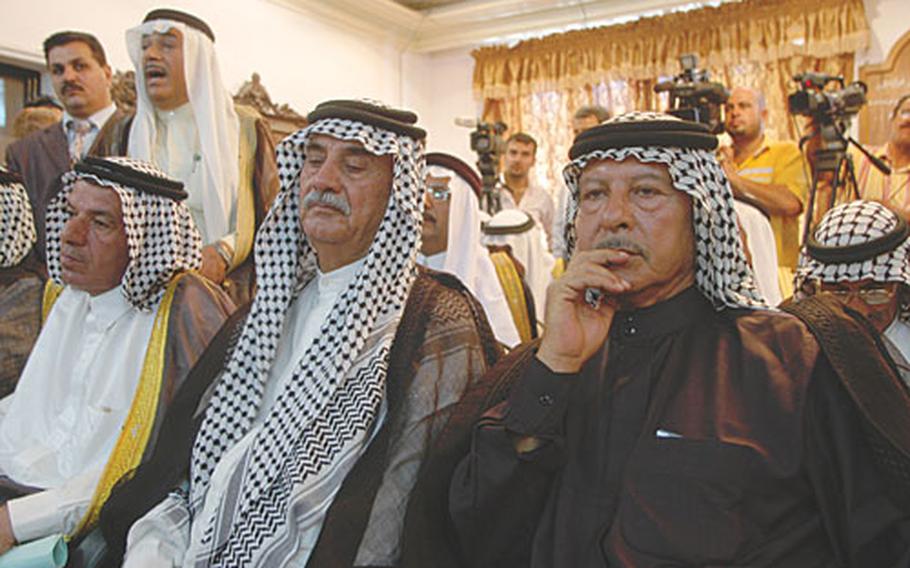 Sheiks speak with Iraqi Deputy Prime Minister Barham Salih in Baqouba, Iraq, on Sunday. A U.S. and Iraqi military offensive in June and July drove many al-Qaida militants out of the city. (Les Neuhaus / S&S)

BAQOUBA, Iraq &#8212; A visit by an Iraqi deputy prime minister to the capital of Diyala province in eastern Iraq was interrupted Sunday by a gun fight while the leader was appraising progress in the area.

Barham Salih, one of two deputy prime ministers, visited the city of Baqouba to consider developments made in security and reconstruction since U.S. and Iraqi security forces purged the provincial capital of thousands of al-Qaida militants in June and July.

&#8220;We must emphasize the security matter, but I can tell you right now that things have improved,&#8221; the Kurdish official said from the offices of Diyala&#8217;s governor, Raad Hameed Juwad Tamimi.

Just as the Iraqi leader was fielding the questions about security from journalists, a torrent of gun fire was heard directly outside the building.

A gunman on a rooftop more than 1,000 feet away opened fire on the offices, known as the Governor&#8217;s Center, and was killed by U.S. troops, according to Col. David Sutherland, the top U.S. commander in the province.

No other injuries or casualties were reported.

A meeting with regional sheiks followed the deputy&#8217;s trip around Baqouba.

One sheik, Walid Gaylani, said recent agreements made between coalition forces and local residents only seemed to be &#8220;words on paper.&#8221; But Sutherland argued the agreements &#8220;have been bringing the violence down.&#8221;

Many other sheiks said the pace of reconstruction and supplying essential goods and services in the province wasn&#8217;t fast enough. They hoped security would be more quickly established.

&#8220;We have to have more security forces in the area because al-Qaida is destroying our homes,&#8221; one sheik in the crowd said angrily, shaking his fist in the air. &#8220;We fear that more of our families will be displaced because they are hungry and thirsty.&#8221;

Some said they needed ammunition to defend themselves.

However, some people aren&#8217;t waiting for ammunition in Baqouba.

Volunteers, known as the &#8220;Baqouba Guardians,&#8221; akin to an armed neighborhood watch, have made pledges with the provincial government and U.S. and Iraqi security forces to abide by government laws as they try to establish security on their own.

&#8220;We must support these people to defend themselves from terrorists,&#8221; Salih said.

Also on hand was Iraqi Minister for Industry Fawzi Hariri, who said deficiencies in fuel and food supplies to the province were being addressed by the central government. He said everyone had a stake in making Diyala productive.

According to the minister, around $82,000 was recently passed on to the Diyala governor&#8217;s office for improvements to services in the province. But this is only a drop in the bucket, several sheiks said.

But central government is also allocating $50 million to Diyala province for compensation for homes and properties destroyed by coalition forces in the purging of al-Qaida, officials say. An additional $30 million is being allocated for agricultural projects.

John Jones, chief of the U.S. State Department&#8217;s provincial reconstruction team in Diyala, who acts as a liaison with regional government officials, said a slow approach was being taken in efforts to help rebuild the area.

U.S. military officials said development would depend on how quickly security was established throughout the Diyala River Valley. The Diyala River splits Baqouba in half and dumps into the Tigris River in southern Baghdad.