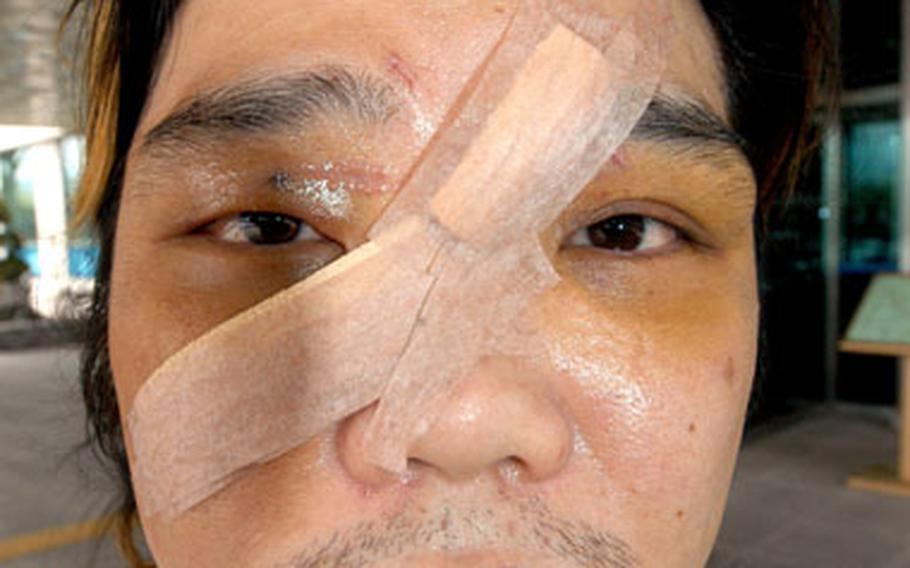 Cho Su-Whan, 34, required eight inches of stitches to close a gash after being hit with a bottle on July 2. A U.S. soldier has pleaded guilty in the attack. (Seth Robson / S&S)

CAMP RED CLOUD, South Korea &#8212; A South Korean prosecutor is seeking a five-year jail term for a U.S. soldier accused of breaking a beer bottle across a Uijeongbu chef&#8217;s face.

Pfc. Anthony Walker Jr., 20, who is based at Camp Red Cloud, pleaded guilty to a charge of assault in the Uijeongbu District Court on Tuesday, court official Park Sun-mi said.

The charges stemmed from a July 2 attack in which Walker smashed a beer bottle across the face of Cho Su-whan, 34.

The South Korean government is granted primary jurisdiction in crimes committed by U.S. military community members while off-duty as outlined by the Status of Forces Agreement that governs the legal status of the U.S. military here.

A heavy sentence is warranted because of the severe wounds inflicted on the victim and because Walker had not made a settlement with the victim, Kim argued.

The court is to make a ruling on the case on Nov. 9, Park said.

Camp Red Cloud-based Pfc. Jerome Doby, 22, initially wrongly identified by South Korean police as Jerome Everette, received nonjudicial punishment for lying to police after he was detained at the scene of the attack, Ivey said.

Another soldier questioned by South Korean police, Pvt. Derion Reynolds, 20, was not punished because of a lack of evidence that he was involved in the assault, Ivey said.