Guideline changes for transgender students worry some US military families 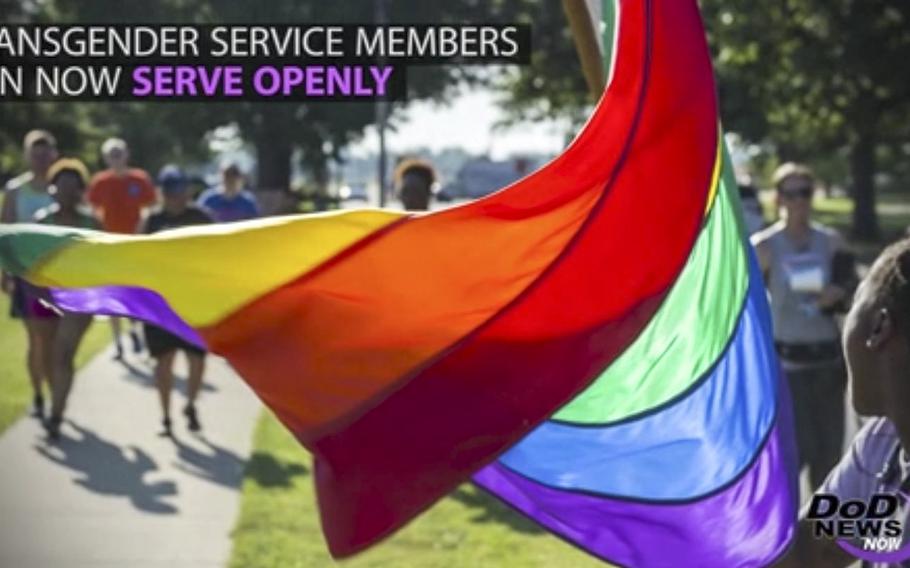 A screen grab shows a clip from a Pentagon news announcement on transgender servicemembers. (Defense Department)

Jessica Girven and Amanda Brewer — both mothers of openly transgender children — are speaking out against the Trump administration’s lifting of federal guidelines that instructed public schools to allow transgender students to use the bathroom and locker rooms of their gender identity.

Their respective schools are currently very supportive, the women said, but they worry that without the backing of federal guidance, a permanent change-of-station move to a more conservative state or a change in school administration could upend that support.

“For military members who don’t have a say in what state they get sent to, it is an insult to our children,” Girven said.

The children of servicemembers have access to Department of Defense Education Activity Schools at most bases overseas, but in the States, DODEA operates schools in only seven states. Texas, home to more U.S. military personnel than every other state except California, sued the federal government last year in an attempt to block the guidelines nationwide. DODEA does not operate any schools in Texas.

“It’s not a states’ rights issue when you have federal employees defending this country,” Girven said. “It forces people to decide between serving their country or protecting their children.”

With her family’s backing, Girven’s 11-year-old daughter, Blue, identified as transgender at her school on Ramstein Air Base last fall.

The school initially gave Blue permission to use the girls’ bathroom. But several days later, the district superintendent overruled the decision, telling the family Blue would have to use a newly established gender-neutral bathroom or the boys’ bathroom until DODEA established a transgender policy, Girven said at the time.

DODEA eventually reversed the decision and announced that all of its schools would allow transgender students to use the bathrooms of their choice. The decision brought DODEA in line with guidelines issued in May by the Justice and Education departments. These said that when students or their parents notify a school that a student is transgender, the school must treat the student consistent with the student’s gender identity.

Whether there will be any changes for transgender students in DODEA schools since the rollback of those guidelines remains to be seen.

DODEA spokeswoman Elaine Kanellis said Friday that principals, educators and staff “will work collaboratively with parents and students on a case-by-case basis to address concerns and identify solutions.”

Her daughter is accepted by her classmates and hasn’t run into problems while using the girls’ bathroom. “She’s been fine,” Girven said. “There’s been no issues, no negativity.”

The Air Force family, however, is facing a military rotation back to the States later this year. Girven said they don’t know yet where they’ll be assigned.

“It is causing such severe anxiety for every member of our family,” she said.

Brewer said her husband, an Army staff sergeant, hopes to be able to stay at his current assignment until their daughter, Jenn, 13, finishes school.

Fairfax schools are “very progressive for the state and she has protections that many kids don’t right now,” Brewer said.

Her daughter, who’s still in transition, is more comfortable using a gender-neutral bathroom, which the school opened for her, Brewer said. More important to her, Brewer said, was that the school use her chosen name and refer to her as “she,” provisions put forth in guidelines by the U.S.

Federal backing “for trans kids is really important, because already they’re one of the smallest groups of people … and there’s so much animosity about them right now going around, just having the administration say we support you is a big deal,” Brewer said.

There are no solid data on how many youth identify as transgender, though the best estimates put the population at under 1 percent of adolescents, according to a report last year in The New York Times.

DODEA does not track the number of transgender students in its schools, Kanellis said. About 72,300 students are currently enrolled in the school system worldwide.

Brewer said she told her daughter of the policy change Wednesday while picking her up from school.

“She basically feels like she has her family on her side but who else is really putting effort into this issue for these kids in this administration?” Brewer said.

“I don’t think that a person’s rights should be up for election every four years.”