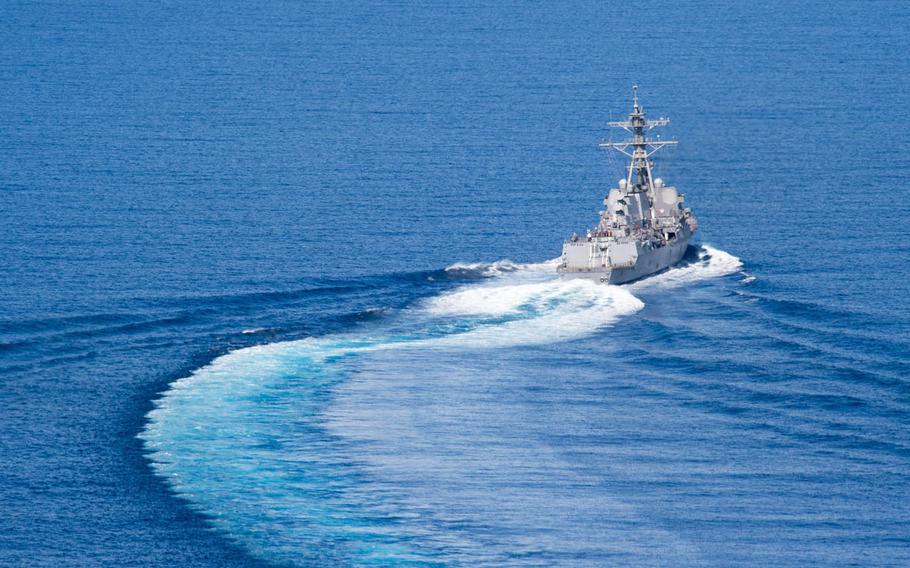 The guided-missile destroyer USS Dewey transits the South China Sea in May. (Courtesy of U.S. Navy)

SEOUL, South Korea — A guided-missile destroyer will make a port call to the South Korean island of Jeju on Tuesday ahead of joint maritime exercises, the Navy said, amid rising tensions with the North.

The USS Dewey sails to the island off the divided peninsula’s southern tip after assisting in search-and-rescue efforts following the USS Fitzgerald’s collision with a merchant vessel off the Japanese coast on Saturday.

The Arleigh Burke-class destroyer, which will join two Royal Canadian frigates, is the latest in a string of U.S. warships to be deployed to the waters off the divided peninsula as fears have grown that North Korea is making progress in its nuclear weapons program.

Dewey will join the HMCS Winnipeg and HMCS Ottawa “for a routine port visit and planning meeting … prior to the navies participating in a trilateral exercise with the (South Korean) Navy,” a statement said.

The five-day exercise will begin on Friday, according to South Korea’s Ministry of National Defense.

North Korea objects to the presence of U.S. ships and joint military exercises, which it alleges are a rehearsal for an invasion despite Washington’s insistence that the drills are defensive in nature.

“We are honored to be guests in Jeju and we look forward to training with our (South Korean) and Canadian partners,” said Cmdr. Anthony Webber, Dewey’s commanding officer. “This visit is important because with each engagement, we improve our cooperation and enhance our combined defensive capabilities.”

The Navy said sailors aboard the Dewey also will have the opportunity for recreational and sports activities while on the volcanic island, a popular vacation spot.

The ship was deployed from its homeport in San Diego to the region earlier this year as part of a program aimed at expanding U.S. Pacific Command’s options.

On May 20, the Dewey also became the first ship to conduct a freedom-of-navigation operation by sailing near a disputed China Sea island.