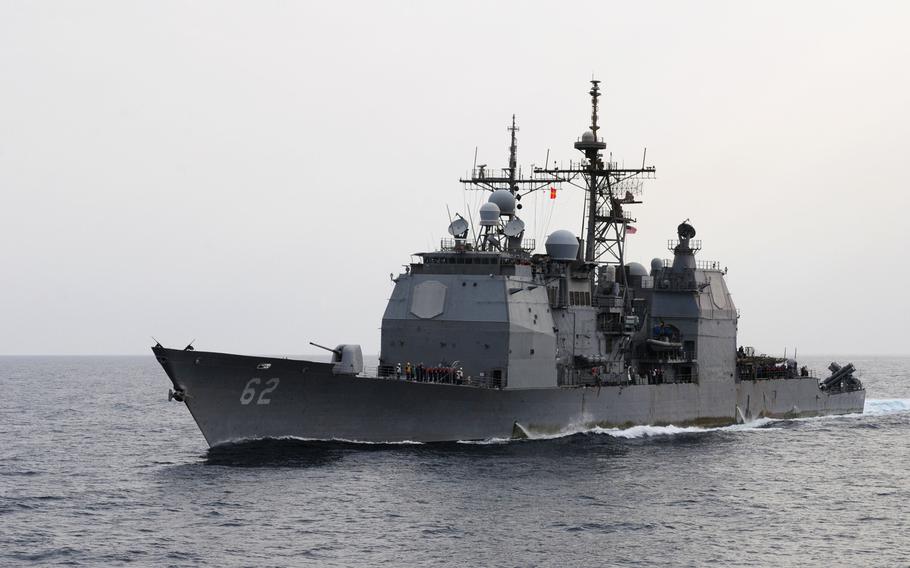 YOKOSUKA NAVAL BASE, Japan — The guided-missile cruiser USS Chancellorsville is en route to Yokosuka to bolster the 7th Fleet’s capabilities in the Asia-Pacific region.

A Navy statement said the recently modernized Chancellorsville is fitted with the latest Aegis Baseline 9 combat system, a computer-based system for defending a carrier strike group against air and missile attack. It will be the first vessel to be forward deployed with that capability.

Naval officials said the Chancellorsville, which left San Diego on Thursday, will enhance the presence of the 7th Fleet as part of the Navy’s long-range plan to send the most advanced and capable units to the region in line with President Barack Obama’s Pacific pivot.

“It is Navy policy to forward deploy our most capable ships, and there is no ship more capable than Chancellorsville,” said Capt. Curt Renshaw, the ship’s commanding officer.

“That capability is not just a result of recent modernization, but is also a function of the readiness of the crew; and this crew has worked very hard to prepare for this day to ensure we are able to arrive immediately prepared for any mission.”

The Chancellorsville will be tasked with participating in maritime security operations and cooperative training exercises with allies and partners in the region, including Japan Self Defense Forces.

The addition of the Chancellorsville is one of many shake-ups occurring in 7th Fleet Pacific Forces. Recently the aircraft carrier USS George Washington departed Yokosuka after being home ported there for the last seven years and will be replaced by the more modern USS Ronald Reagan.