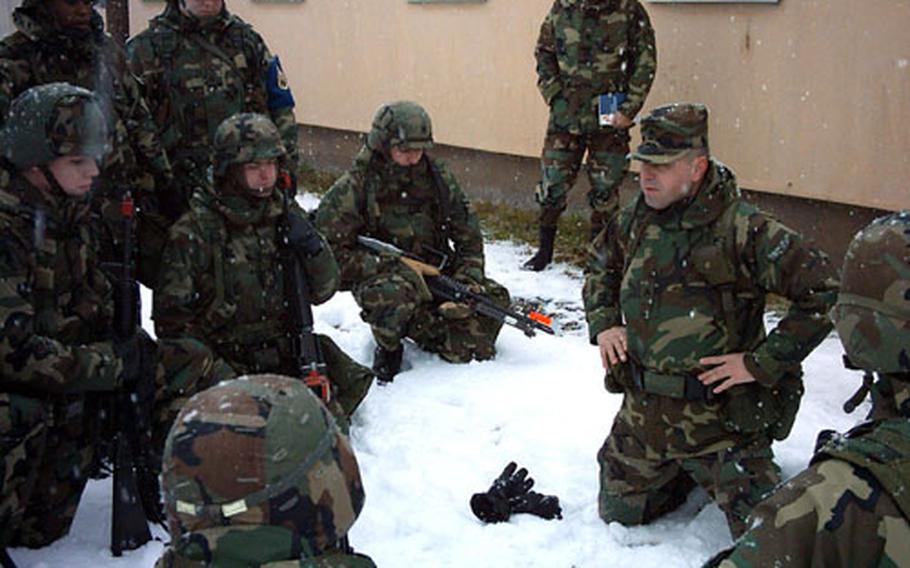 GRAFENW&#214;HR, Germany &#8212; A training brigade at Grafenw&#246;hr is giving junior enlisted Reserve and National Guard soldiers a better shot at promotion to sergeant.

The 7th Army Reserve Command&#8217;s 3747th Training Brigade provides a 15-day Primary Leadership Development Course, which is vital to a soldier being promoted from the rank of specialist or corporal to sergeant.

When fully staffed, the battalion can take 96 PLDC students through one training cycle per year &#8212; generally those soldiers who are deployed somewhere within the Europe theater of operations, according to Maj. Jonathan Beard, deputy commander of the 3747th Training Brigade.

This year, however, the instructors and supporting staff, most of whom are in the Reserve component and teaching the course as their two-week annual training, will teach at least three cycles, or roughly 300 soldiers, Beard said.

&#8220;There is a serious backlog of junior enlisted soldiers trying to get into PLDC Army-wide,&#8221; said Lt. Col. Gregory Martin, assistant deputy chief of staff for the 7th Army Reserve Command.

&#8220;The troops deployed over here probably have a better chance of getting PLDC than [their counterparts] in the States.&#8221;

To accommodate the soldiers, the instructors and support staff will triple their annual training period, putting in six weeks over the course of the year instead of the normal two, according to Sgt. 1st Class Leonard Larry, a senior instructor for the leadership course.

And these are no 9-to-5 workdays. The course runs for 15 days straight, including weekends, to fit it into the two-week annual training window. For active-duty soldiers, the course lasts four weeks.

Instructors can count on going about an hour later that, until midnight, Larry said.

But he doesn&#8217;t complain about the hours, or the extra training cycles.

Most of the 92 remaining PLDC students in the current course, who graduate Saturday, are National Guardsmen from the 34th Infantry Division out of Minnesota and Iowa. They have been placed on active duty to support base security for U.S. Air Forces in Europe, as well for deployments to the Balkans and to Iraq, according to Lt. Col. Jon Dahms, 7th Army Reserve Command spokesman.

Sgt. Brian Leard, one of those taking the course, was braving the freezing temperatures of the Grafenw&#246;hr Training Area for the final field training exercise on Thursday. Just a couple of weeks before, he was in Iraq.

&#8220;I got here a few days before the course started, so I had time to acclimatize,&#8221; Leard said, adding that he expects to return to Iraq the day after graduation from the course.

Leard was conditionally promoted to sergeant but needed the course to keep his rank.