Guardsmen readjusting to life on homefront Eric Butz stands next to a marker honoring residents of Oneida, Ill., who served their country in war. The Illinois National Guardsman, who served in Iraq with Battery F, 202nd Air Defense Artillery, is now part of that group. (Ron Jensen / S&S)

Eric Butz stands next to a marker honoring residents of Oneida, Ill., who served their country in war. The Illinois National Guardsman, who served in Iraq with Battery F, 202nd Air Defense Artillery, is now part of that group. (Ron Jensen / S&S) Maj. Mike Kessel worried about soldiers in his unit when they returned alone to their hometowns after serving in Iraq. (Ron Jensen / S&S) 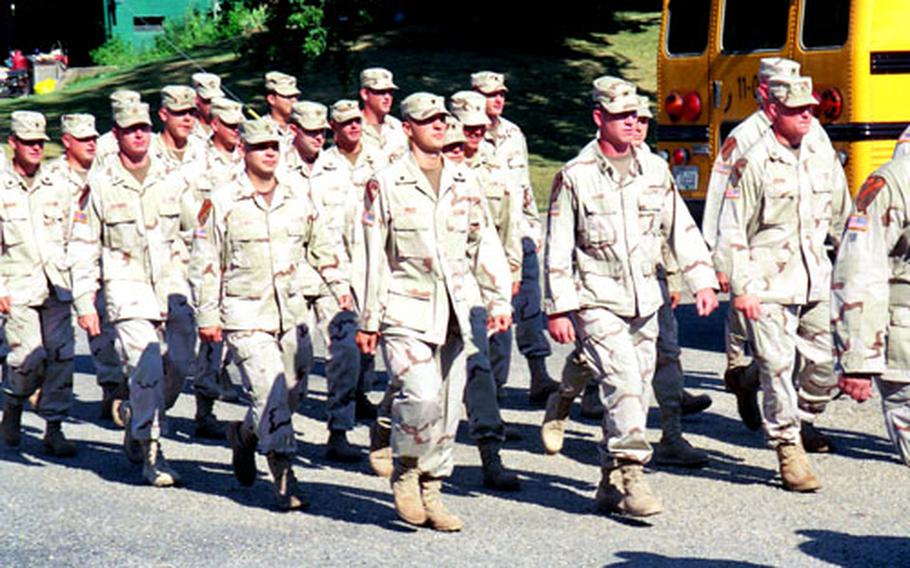 Members of Battery F, 202nd Air Defense Artillery, a unit of the Illinois National Guard, prepare earlier this month for a rehearsal of an awards ceremony four months after returning from Iraq. (Ron Jensen / S&S) Chris Rodgers is in uniform again for a training day with the National Guard unit he served with in Iraq. The members scattered when they returned in March. (Ron Jensen / S&S)

ONEIDA, Ill. &#8212; Eric Butz is the only person in this quiet prairie town who knows the sound of a roadside bomb exploding. Chris Rodgers is the only resident in nearby Wataga who has been hit by shrapnel from one of those bombs.

The two soldiers returned home in March after serving in Iraq with Battery F, 202nd Air Defense Artillery. But unlike active-duty units that remain together at deployment&#8217;s end, the 120 men of this Illinois Army National Guard unit scattered like windblown sand.

Only a few live in Galva, a town of 2,200 where the unit is based, he said. The men live in 70 communities across five states, although most come from an archipelago of farming towns lost in the ocean of cornfields that covers west central Illinois &#8212; places such as Neponset and Toulon and Knoxville and Dixon.

They saw each other at monthly meetings, but few knew each other well until they spent a year together in Iraq.

When they returned, they split up, each going his own way. This distinguishes them from the active-duty troops they served with from the 1st Cavalry Division. Active-duty troops see each other daily after their deployments. They remain in uniform, saluting and polishing their boots.

Kessel&#8217;s men returned to civilian lives as factory workers and firemen, salesmen and cops. The commander is a stockbroker from Mahomet, Ill.

Butz and Rodgers are unusual, in fact, because they worked together for the town of Oneida upon their return, patching sidewalks and filling potholes, among other tasks.

&#8220;It helps a lot to have him to talk about it,&#8221; Rodgers said of Butz and their shared time in Iraq. The two graduated from Oneida&#8217;s ROWVA High School together in 2001. The school&#8217;s name is an acronym of the five small towns that contribute to its student population.

Butz, who lives above an insurance office in Oneida&#8217;s nearly deserted business district, said he and Rodgers sometimes share memories of Iraq.

But there wasn&#8217;t much goofiness for the unit while in Iraq. The soldiers, who spent four predeployment months being retrained as motorized infantry, spent much of their time patrolling the dangerous road between Baghdad and the airport.

The unit lost no one, but 18 men were awarded 21 Purple Hearts, including Rodgers. Five soldiers were injured seriously enough to be sent stateside, including Sgt. Dustin Hill, who lost both hands, an eye and an ear, along with other injuries, when a car bomb exploded and set him ablaze.

Rodgers said he hated being alone after he returned. He spent every day for more than a year surrounded by other soldiers and the solitude bothered him.

Butz, too, said the adjustment was trying.

&#8220;I was kind of stressed out for a while. It was kind of overwhelming,&#8221; he said. Everybody wanted his time. He was pulled in all directions.

But there&#8217;s a good side to that. Since no one else in town has been to Iraq, the returning troops are feted everywhere they go. They&#8217;ve had to buy few of their own beers since returning.

But it is hard if they want to talk about their time in Iraq with someone who can relate. Kessel said he was concerned as the unit broke apart in March following a heroes&#8217; welcome in Galva.

He was happy for the unit training day two weeks ago, the first since their return, when the medals and honors were awarded. It gave the men a chance to share their thoughts and memories, he said.

Rodgers said before the event he was looking forward to his first chance to catch up with fellows who now mean a lot to him.