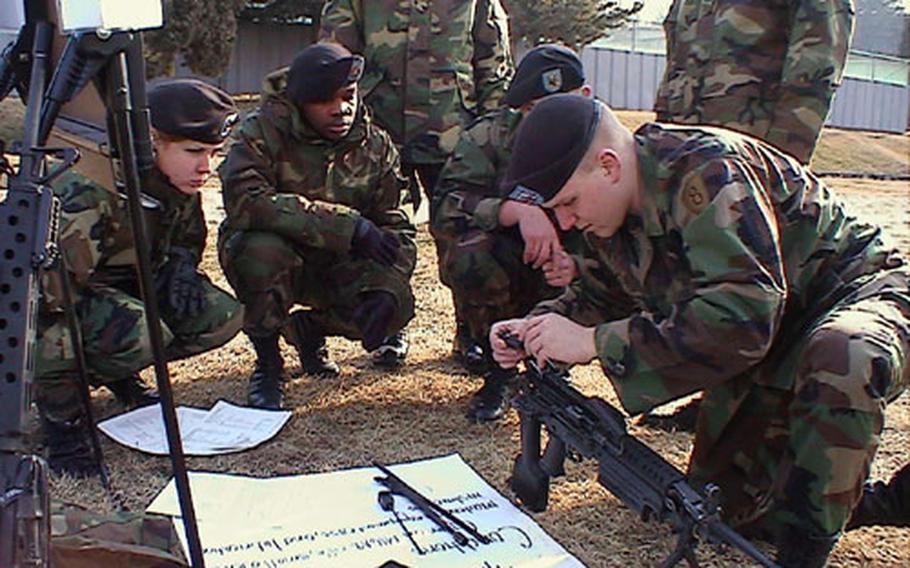 Spc. Manuel Saucedo of the Texas Army National Guard shows soldiers from the 516th Personnel Services Battalion how to disassemble the M249 weapon during training in South Korea. Members of the Guard volunteered to come to Korea to help with the holiday mail rush. (Courtesy of U.S. Army)

Spc. Manuel Saucedo of the Texas Army National Guard shows soldiers from the 516th Personnel Services Battalion how to disassemble the M249 weapon during training in South Korea. Members of the Guard volunteered to come to Korea to help with the holiday mail rush. (Courtesy of U.S. Army) 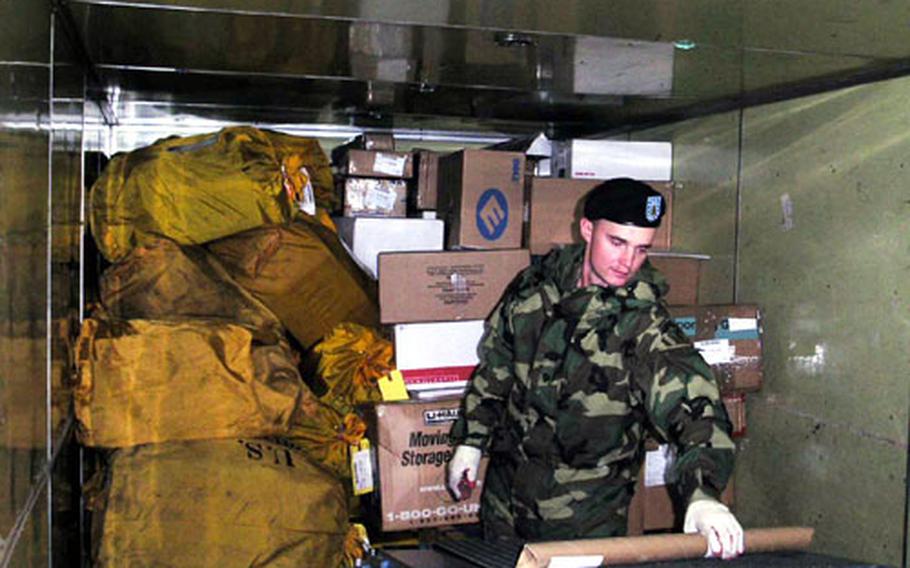 YONGSAN GARRISON, South Korea &#8212; Spc. Robert Freeman&#8217;s family feared he was heading to war when the Texas National Guard soldier told them he was deploying overseas for the holiday season.

But Freeman wasn&#8217;t headed to Iraq. Instead, he and 20 other members of Company B, 3rd Battalion, 49th Armored Division had volunteered to come to South Korea to help with another contingency operation: ensuring servicemembers on the peninsula got their holiday presents and Christmas cookies.

According to Capt. Tanya Bradsher, commander of Company D of the 516th Personnel Services Battalion, the volume of military mail in South Korea reaches its peak &#8212; almost 2 million pounds &#8212; in December.

So each year a National Guard unit is sent to South Korea to help with incoming and outgoing packages.

This year, though, the unit that was scheduled to go to South Korea was rerouted to the Middle East. The 8th Personnel Command put out a plea for help, and through their Guard and Reserve liaisons, got a reply.

&#8220;We looked at other ways to fill the shortage,&#8221; Bradsher said. &#8220;We changed the requirements. Instead of just asking for postal personnel, it opened the window to whoever could fill the vacancies.&#8221;

Like the 49th Armored Division. Freeman said he and the rest of his unit received an e-mail Dec. 11 seeking around two dozen volunteers to take the mission to South Korea. Within 24 hours, almost 50 Guardsmen had asked to be taken. The unit selected a group of soldiers; by Dec. 17, they were on a plane to South Korea.

Once the soldiers arrived, they were sent to two platoons of Company D. They were integrated into the platoon structure, completing both the daily tasks and whatever extra training was going on at the same time.

Freeman, for example, went through machine-gun training with his new platoon. He also worked the night shift, unloading huge metal containers and sorting the thousands of pieces of mail they contained.

But he also had time to see the sights, including the Korean War Museum. While being deployed over the holidays was tough, Guardsmen kept in touch with folks at home, thanks in part to phone cards donated by the USO.

And with the holiday rush over, the Guardsmen are returning to their homes in Texas. Most flew out on Jan. 2 and Jan. 3.