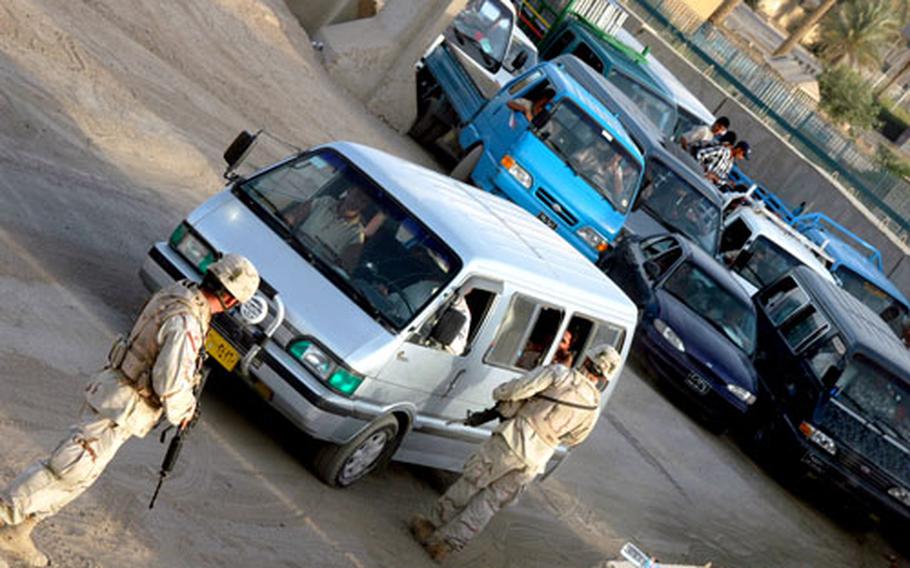 Soldiers working Gate 4 begin to wave through individual trucks from a line of dozens waiting to get into Camp Liberty on Tuesday morning. The security checks at Gate 4, one of only two civilian access points to the mammoth base in Baghdad, have several stages, including questioning, X-ray and imaging monitors, dogs sniffing for explosives and hand searches. (Teri Weaver / S&S)

Soldiers working Gate 4 begin to wave through individual trucks from a line of dozens waiting to get into Camp Liberty on Tuesday morning. The security checks at Gate 4, one of only two civilian access points to the mammoth base in Baghdad, have several stages, including questioning, X-ray and imaging monitors, dogs sniffing for explosives and hand searches. (Teri Weaver / S&S) 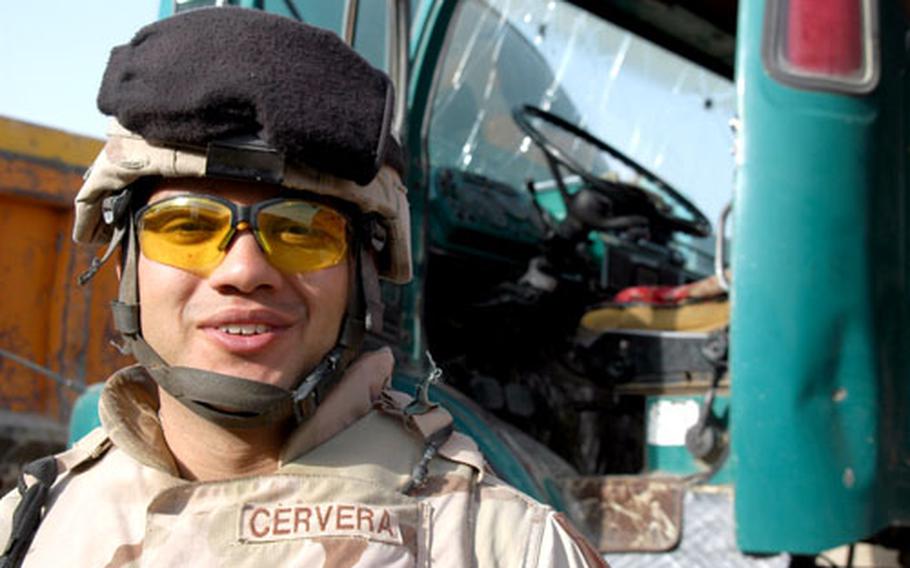 Sgt. Paul Cervera, 29, of Milwaukee, helps oversee searches of the industrial trucks that come into Camp Liberty each day. The windshield of the truck behind him is full of bullet holes. (Teri Weaver / S&S) 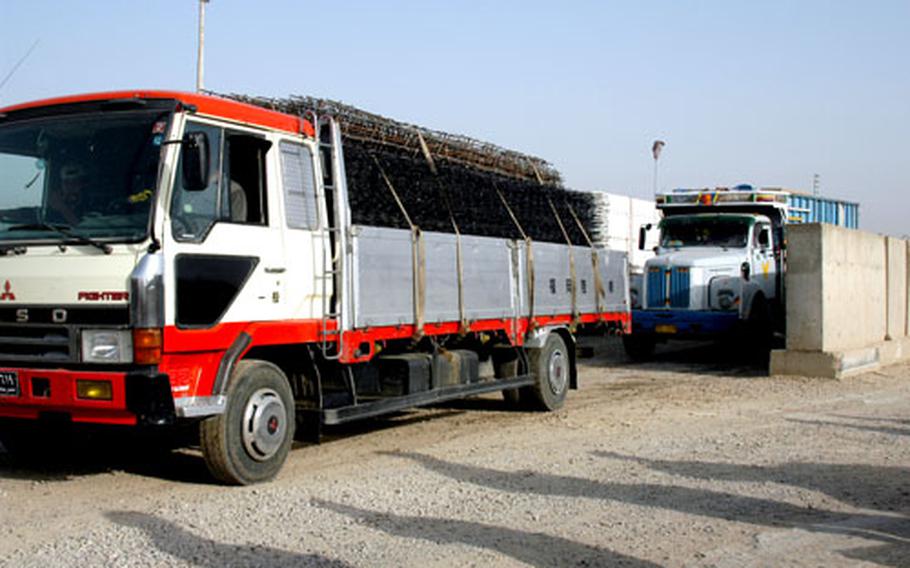 CAMP LIBERTY, Baghdad &#8212; To get to work on time at this U.S. military base, Iraqi residents need to show up at least an hour early to ensure they have enough time to make it through security.

If a driver is hauling commercial goods or industrial supplies, that time can easily grow to two hours, according to the soldiers with Battery B, 1st Battalion, 126th Field Artillery, who manage access to and from the massive base in Baghdad.

For eight months, these soldiers from the Wisconsin National Guard have been searching hundreds of workers and vehicles to make sure nothing dangerous gets on base, said Sgt. 1st Class Jeffrey Demet, 38, of Delavan, Wis.

They average more than 600 people and 130 vehicles each day, according to Sgt. 1st Class Scott Schraeder, 34, of Waterford, Wis.

The searches range from simple questioning to using an imaging machine that allows soldiers to see through clothes. Dogs sniff vehicles for explosives and trucks pass through X-ray machines. The workers and their vehicles are hand-searched, too.

The soldiers are looking for items that could pose a threat to the secured base: guns, knives, alcohol, drugs, cell phones, explosives and other weapons, Demet said.

One morning, a man gave Spc. Michael Keross, 24, of Milwaukee, a knife the man had in his car. The man said he was carrying it for protection but forgot to take it out of his car. He made it a present to Keross, whom he sees many mornings.

Because Battery B has been doing this mission for eight months, its members recognize the faces of regular workers and drivers and can easily spot someone new in line. They&#8217;ve picked up enough Arabic so that they rarely use interpreters during routine questioning.

More than anything, the soldiers find cell phones. Drivers and workers carry them in case their vehicle breaks down, but they forget to take them out of the car. At the first checkpoint, they can turn around if they want to keep the phone. Otherwise, they turn it over and don&#8217;t get it back.

Sgt. Dominic Birchfield, 26, of Woodstock, Ill., works the outer gate and says soldiers are cautious about becoming complacent with people they know.

Occasionally, the soldiers find more than cell phones. Sometimes trucks will have traces of explosives. If a dog smells something on a truck, that portion of the vehicle is tested, as is the driver&#8217;s hands. If anything tests positive, the truck must leave base.

Often, the positive tests come because the truck has driven through the site of an exploded roadside bomb, Schraeder said.

&#8220;We did have a goat try to get through,&#8221; Birchfield said. The people were bringing the live animal in for a feast, but the soldiers told them they could bring in butchered meat, not livestock.

Some of the soldiers were disappointed last fall when they arrived in Baghdad and discovered they were on gate duty, Demet said.

But the job, Demet and others said, is vital to everyone&#8217;s safety here.