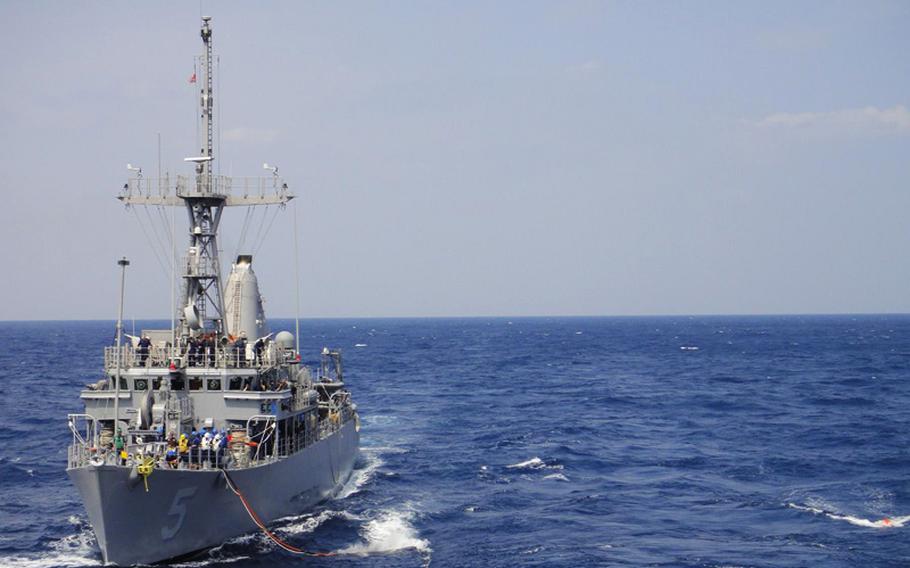 The USS Guardian is pictured in the East China Sea in this March 2011 photo. (U.S. Navy)

SASEBO NAVAL BASE, Japan — The crew of the USS Guardian was transferred to a support vessel Friday as the Navy tried to dislodge the minesweeper from a reef off the coast of the Philippines, Navy officials said.

No one was injured when the 224-foot Avenger-class mine countermeasures ship ran aground around 2:25 a.m. Thursday on Tubbataha Reef, about 80 miles east-southeast of Palawan Island, Navy officials said. The ship was transiting the Sulu Sea after a port visit in Subic Bay.

Attempts to free the ship at high tide failed, so 72 of the 79 crewmembers were transferred by small boat to the Military Sealift Command-chartered MV C-Champion as a “precautionary measure,” the Navy’s 7th Fleet said in a statement.

“The present status is all sailors are safe and there are no injuries,” ship ombudsman Kimberlyn Barr wrote in an email to Stars and Stripes shortly before she met Friday afternoon with family members at the ship’s homeport, Sasebo Naval Base. “The sailors are doing well.”

The ship’s commanding officer, Lt. Cmdr. Mark Rice, and executive officer, Lt. Daniel Tyler, were among the small contingent of engineering and bridge personnel remaining onboard to help a Navy team in freeing the ship, the statement said. Plans called for them to be evacuated if conditions become unsafe.

Navy officials said they were taking care to minimize environmental impact, and the Philippine government is being updated regularly.

Tubbataha Reef is a protected park and a World Heritage Site. Park officials declined to comment on the impact the grounding may have to the fragile ecosystem of the reef. Officials in the U.S. Embassy in Manila also declined to comment. The Navy said there were no signs of fuel leaks.

The cause of the grounding remains under investigation, Navy officials said.