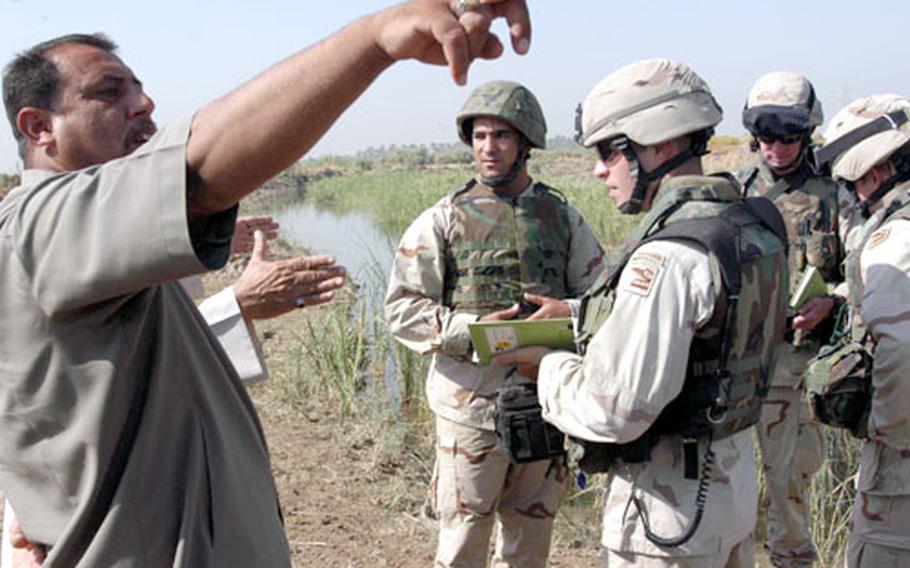 1st Lt. Thomas Hernandez, at right holding notebook, talks to an Iraqi farmer about flooding on his land near Ash-Shumali, while a translator, center, assists. Hernandez and other members of the 1st Battalion, 185th Armor Regiment&#39;s civil-military operations team spend time interacting with Iraqis, helping to maintain peace in the area. (Juliana Gittler / S&S)

CONVOY SUPPORT CENTER SCANIA, Iraq &#8212; A group of California National Guard soldiers has assumed an unfamiliar job in southern Iraq: building bridges, buildings and culverts while helping to maintain security in a small sliver of the war-torn nation.

Members of the 1st Battalion, 185th Armor Regiment arrived in Iraq and assumed security operations in an area 150 miles south of Baghdad. As part of their security plan, they are working on civil-military operations that help locals stay peaceful by rebuilding their communities.

&#8220;These folks are pretty coalition friendly, which lets us get our projects off the ground quickly,&#8221; said team leader Capt. Scott R. Moreland. &#8220;That&#8217;s why it&#8217;s remained peaceful. We really aggressively pursued civil-military operations as a command-sponsored operation.&#8221;

The concept is an Army standard. But the soldiers making it happen are unconventional. They normally work with tanks and infantry. It&#8217;s their backgrounds that made the difference.

&#8220;The beauty is we came in with some background,&#8221; said Sgt. Brian Freeman, an electrical engineer, who previously did project management in the Air Force. &#8220;The only thing that changed for me is the body armor and the scale of the projects.&#8221;

Also on the team is 1st Lt. Thomas Hernandez, who was in a civil affairs unit as an enlisted soldier, and Capt. Rafael Obieta, a civilian defense contractor for the Air Force.

Using their experience, they built a civil affairs program from scratch.

They started smaller, less expensive projects that would be easier to complete. They rebuilt battered footbridges over canals that saved locals from walking miles out of their way. Cement water culverts helped farmers with irrigation.

Doing small jobs, the Guard members have completed more than most other battalion-size civil-military operations.

The team uses local engineers to plan projects and hires local contractors to build them. They work closely with local leaders to prioritize.

The team of about a dozen people &#8212; some doing projects while others conduct security and information gathering &#8212; has completed 31 projects and is working on 11 more.

Their success is demonstrated by stability in the region, the Guard members say. Local residents, pleased with their improved communities, chased away insurgents over the summer and provide intelligence, Sayers said. There have been few attacks in the area for months.

The group&#8217;s success is filtering to other units with a similar mission. A project database created by Freeman and the team&#8217;s operating procedures are circulating in other areas where battalions hope to re-create the results.

The team members, despite doing jobs the Army didn&#8217;t train them for, are rewarded by the results.