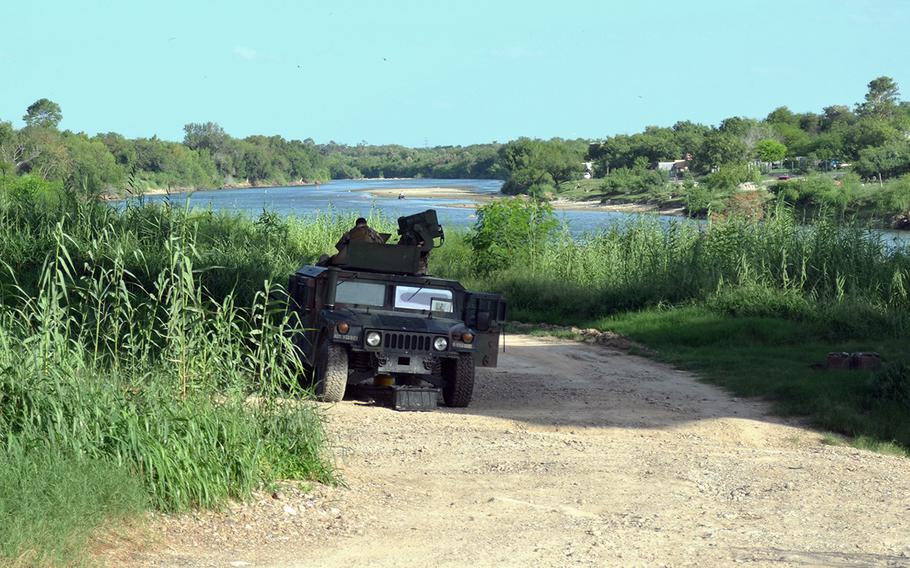 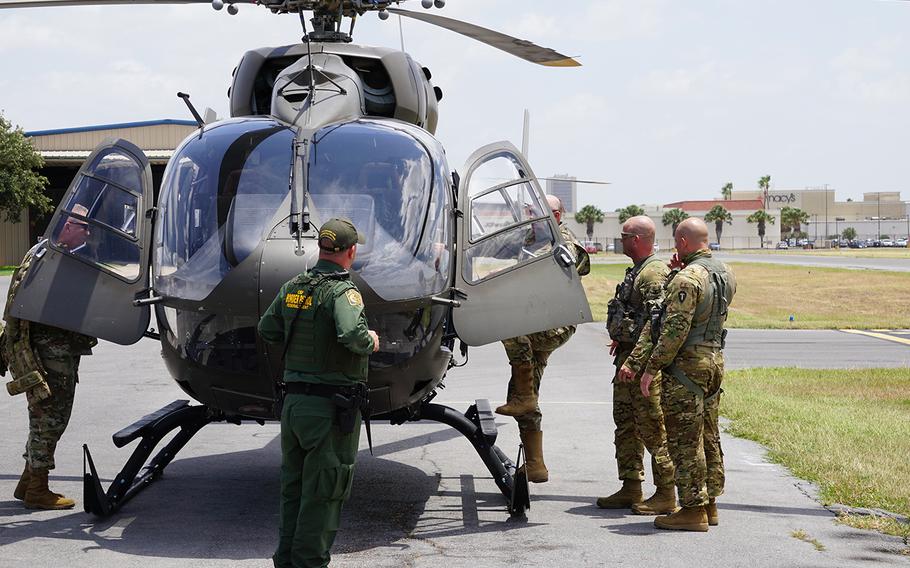 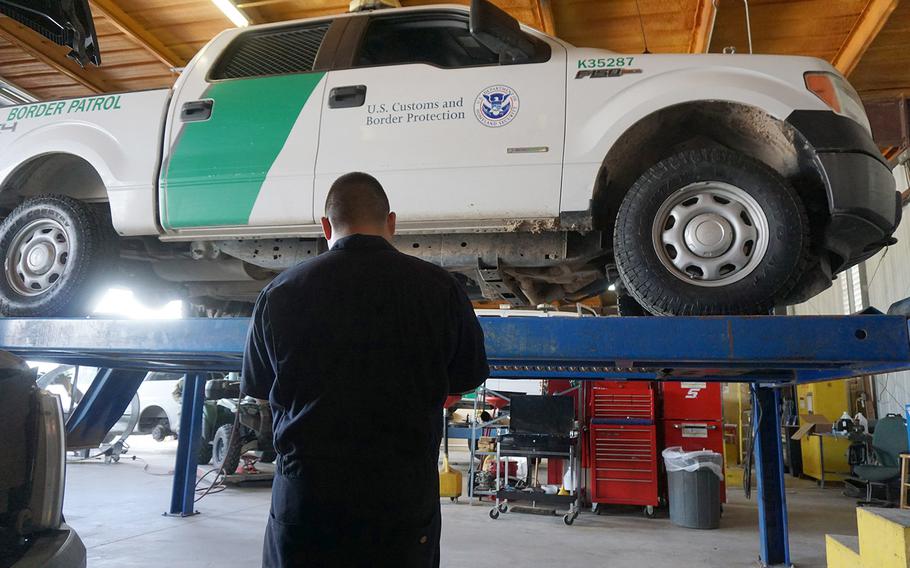 Nearly 2,000 National Guard troops have been mobilized in the last three months to help protect the U.S. southern border from a surge in migration from Central America, yet many soldiers have been relegated to behind-the-scenes support roles, far from the front lines of the battle against unlawful crossings into the United States.

President Donald Trump announced in April up to 4,000 National Guard troops would deploy to the southern borders of Texas, New Mexico, Arizona and California to help guard against unlawful immigration, but less than half of the soldiers are on the ground with U.S. Border Patrol guarding against unauthorized migrants.

When National Guard troops were sent to help bolster border patrols in 2014 under former President Barack Obama, the soldiers were armed and wearing full gear. The day-to-day mission of the Guard deployed this time in Texas is starkly different.

This joint Guard-Border Patrol mission, known as Operation Guardian Support, keeps soldiers back from the border and in stations where they perform tasks such as vehicle maintenance, administrative duties, monitoring of surveillance data collected through cameras and sensors along the border, and clearing vegetation to improve sightlines in the field.

Yet, from the soldiers’ behind-the-scenes roles, they have assisted with nearly 8,500 apprehensions and the seizure of more than 11,000 pounds of narcotics in the four southern border states, said Assistant Chief Alfredo Lozano. He leads the Border Patrol side of this new mission within the Rio Grande Valley area of Texas. Focused mainly on a 320-mile riverfront stretch from Brownsville west to Starr County, the Rio Grande Valley is the busiest section of the U.S. border with Mexico. About half of the drugs seized with the Guard’s assistance were found there, and 375 of the 1,950 National Guard soldiers deployed to the U.S. southern border are concentrated in this area.

National Guard commanders and soldiers on this mission would not speak about it with news reporters. There is a Texas National Guard policy that prohibits troops deployed on this border mission from commenting publicly about it.

Operation Guardian Support is authorized for funding through the end of September, said Army Lt. Col. Jamie Davis, Defense Department spokesman. The estimated cost is $182 million. It’s unclear if it will continue beyond that date.

The closest soldiers get to the border are the troops working in offices at five ports-of-entry in the Rio Grande Valley and the Lakota helicopter crews flying air-surveillance missions.

Lozano said one crew recently located a migrant in distress and were able to call in the medical staff needed. Soldiers also built distress call beacons that allow people lost or in trouble in the harsh terrain to call for help.

“All that has a ripple effect on what it allows Border Patrol to do,” he said.

The Guard members in Lozano’s sector have allowed 50 Border Patrol agents to return to the southern border with Mexico. As the mission continues, he said he expects the number of agents returning to the border to increase.

“From the get go, our goal has been to return agents back to the border. Not all soldiers are directly replacing an agent, but every soldier contributes to the overall mission,” Lozano said.

In the past several weeks, there have been calls to pull the National Guard from the border in response to the Trump administration’s new “zero-tolerance” policy on immigration that led to the temporary separation of families seeking asylum in the United States. While actual unlawful crossings hadn’t increased, this policy increased the number of arrests and charges filed, creating a ripple effect with agencies and operations along the border.

In McAllen, a city of about 142,000, Mayor Jim Darling, a Vietnam-era Air Force veteran, emphasized the soldiers are in the area to augment protection of the border, not to protect the border cities or get involved in any immigration arrests or detentions.

“It’s not their fault there’s a misconception of their role,” he said.

McAllen has become a ground zero for the issue, as the new policy created an overflow of migrants there. Darling said the port-of-entry isn’t meant to support this type of traffic in addition to the 8,000 people who cross daily for business and recreation. Since the new policy, people have been turned away at the bridge, some of them choosing to sleep on the Mexican side of the port to stay in line.

Images in the news of children in makeshift detention centers sleeping with metallic space blankets led to the ongoing call by some lawmakers, mostly Democrats, to pull the National Guard from the border in protest of these new immigration policies. California Gov. Jerry Brown said he had no intention of removing troops because of the limited scope of their mission. In Texas, Gov. Greg Abbott has received similar letters from state lawmakers, but he has remained silent on the issue. His office did not respond to requests for comment.

Through it all, Guard members appear to remain far from the situation and that has some Border Patrol agents wishing soldiers could do more.

“At the union, we were expecting the National Guard people to be manning areas and trucks,” said Art Del Cueto, spokesman for the National Border Patrol Council. “That’s not really what happened. They watch some of our cameras, but even where they watch cameras, we have agents with them because of access to computer systems.

“They have helped out, but I don’t think they’ve helped out as much as what we wanted or expected,” he added.

During the Guard’s 2014 deployment, soldiers patrolled the border directly and took a more boots-on-the-ground approach to augmenting Border Patrol. Traces of that old mission are still ongoing and can be seen in the small town of Roma, population 10,000.

Nestled along the western edge of the Rio Grande Valley in Starr County, Border Patrol vehicles frequent an empty dirt road along the town’s waterfront. Every so often, visitors to Roma’s World Birding Center Observation Deck are passed by a Border Patrol agent, a local police officer or armed National Guard soldiers conducting routine surveillance. The water here is shallow and people could easily—and do—swim across and make a run for it through town.

About two blocks away, tucked underneath the Roma–Ciudad Miguel Alemán International Bridge, sit National Guard soldiers, armed and manning an observation point. Their Humvee just feet from the water, their presence is intended to deter people looking to cross into the United States illegally.

While people in Starr Country are familiar with soldiers on patrol, Guard members blend into daily life in other border towns. The soldiers are often out of uniform, staying in local hotels and using per diem to dine in local restaurants and shop at grocery stores.

Sergio Contreras, president and CEO of the Rio Grande Valley Partnership, a regional chamber of commerce, said he and most people in the community understand that Border Patrol occasionally needs additional assistance and welcome the collaboration with the National Guard to ensure safety and the flow of commerce.

“We do have a significant number of shoppers from Mexico that come into the U.S. and shop for items and dine and stay at hotels and bring an economic value to our region,” Contreras said.

The Guard’s presence saved lives in late June, when flooding overtook the town of Weslaco, where the Texas National Guard has set up a subordinate command post. Soldiers were able to quickly jump in and support high-water rescues during flooding June 20-23. During those days, the city of Weslaco conducted more than 1,100 high-water rescues, which were overwhelming to their emergency systems, said Antonio Lopez, Weslaco fire chief and emergency manager.

“We’re so glad (the National Guard) came here, because they’ve done rescues before and had the vehicles to do it. They provided a lot of manpower,” Lopez said.

Behind the news ... On April 13 and in response to a call-to-action from President Donald Trump, Defense Secretary Jim Mattis authorized up to 4,000 Guard members to deploy for Operation Guardian Support in Texas, Arizona, New Mexico and California through Sept. 30, the end of fiscal year 2018. So far, 1,950 soldiers are activated with 400 in Arizona, 350 in California, 100 in New Mexico and 1,100 in Texas. They come from those states, as well as Missouri, Indiana, Maine, Wisconsin, Arkansas, Tennessee, Kentucky, Mississippi, Oklahoma, Louisiana, South Carolina, Georgia, Alabama and Florida.

It’s unclear if the mission could continue into fiscal year 2019.