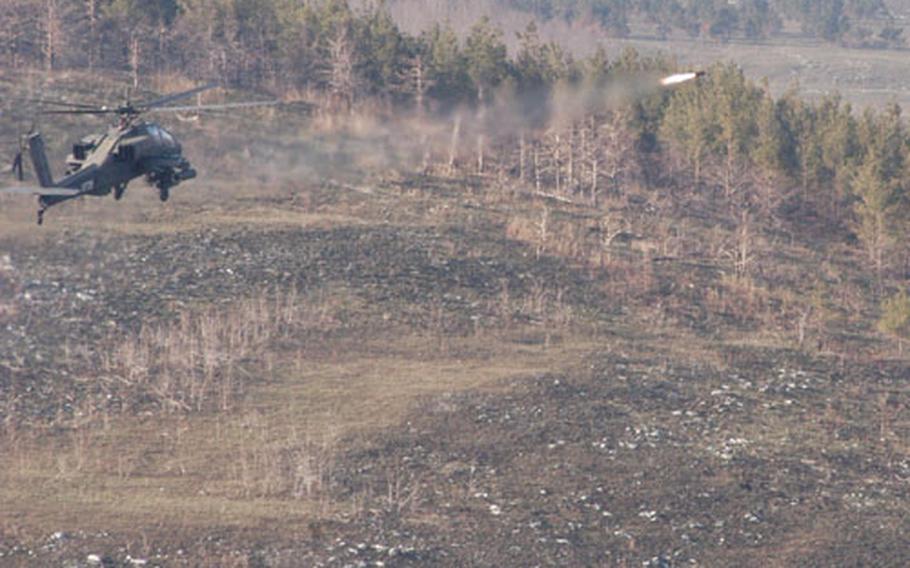 He waited a few seconds and saw the targeted bus disappear in a cloud of smoke.

&#8220;Bye-bye,&#8221; Oubre said, motioning with his hand as he reviewed the video of the exercise he and Chief Warrant Officer 2 Gary Hipps completed just an hour before.

Members of Task Force Renegade, 49th Armored Division of the Texas National Guard got a rare training opportunity during an exercise that started Nov. 9 and ended Friday.

The guard troops held Black Hawk door gunnery exercises and fired smaller-caliber rounds, such as the 30 mm weapon. Apache crews also had a chance to get a real feel for Hellfire missiles.

The $40,000 Hellfire missiles are hard to obtain on a tight state budget, so the troops train on simulators at Fort Hood, Texas.

&#8220;To be fully qualified on an aircraft you never have to shoot a Hellfire,&#8221; said Capt. Randall Stillinger, the task force civil affairs officer.

&#8220;Simulation allows everyone to be proficient with less expense,&#8221; Capt. Robert Guevara said.

The Apache crews had 22 Hellfire missiles available for the training, two for each crew.

&#8220;That federal money [that came from being deployed] is what allowed us to get all the good training,&#8221; Stillinger said.

Glomac Range is used by different Stabilization Force nations. The guard fliers were introduced to the range in September when they fired their first rounds. On a return visit, they got a chance to practice flying in a mountainous area and shoot in ever-changing, windy conditions. It was also their first opportunity for a nighttime exercise using the Hellfires.

On Wednesday, the 26 mph crosswind added a challenge, but even from more than 2,500 meters away, Oubre and Hipps hit their target.

The pilots also faced some surprises. One time they spotted a white trashy-looking car as they were flying to the firing zone and figured that was their target. But as soon as they said that out loud, still at a distance from the firing position, the target moved. Two civilians in the car were rushing away after collecting the brass casings left after the previous firing.

The task force was able to rotate all its Black Hawk crew chiefs, who have to qualify each year in the exercise, and allow other troops who do not have to follow the same requirements to do some training, too.

While the aviators hope they do not have to fire the weapons for real, they realize the importance of keeping their skills sharp.

&#8220;The more often we have an opportunity to do something like this, the better we get, the more competent we get,&#8221; Guevara said.