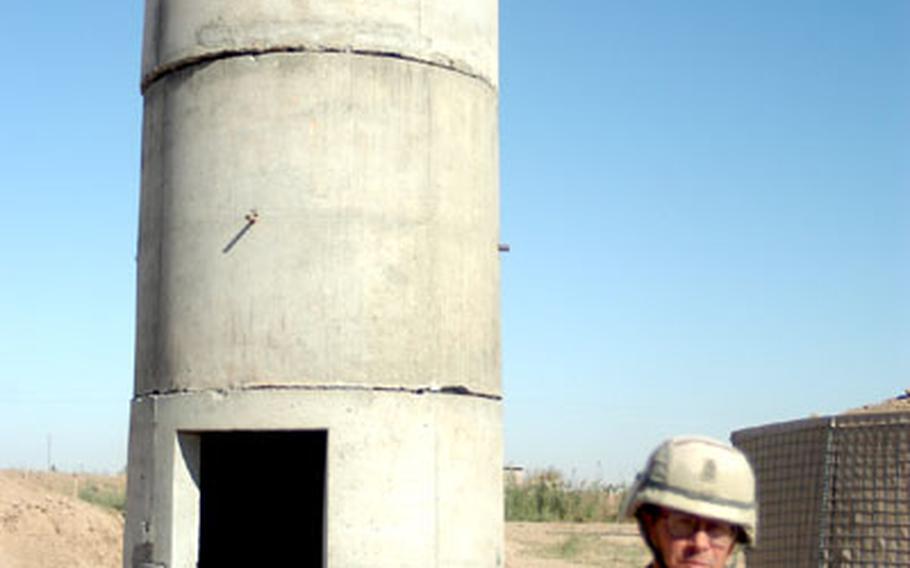 Sgt. Maj. Daniel Ous of 1st Battalion, 8th Infantry Regiment, 3rd Brigade Combat Team, part of the 4th Infantry Division, shows off a prototype for a guard tower developed at FOB Eagle. The towers are supposed to less vulnerable to attacks by rocket-propelled grenades, which in some cases would glance off the tower. The camp will soon have nine of the locally made towers placed on the perimeter. ()

FOB EAGLE, Iraq &#8212; A guard tower designed at Forward Operating Base Eagle and constructed by a local contractor is about to be put to the test.

If it works, the towers will be placed around this base, home of the 1st Battalion, 8th Infantry, part of the 4th Infantry Division&#8217;s 3rd Brigade Combat Team.

The tower consists of three concrete rings about six feet high, placed on top of one another with a floor built on the top one for guards. At 12 inches thick, the towers should withstand a direct hit from a rocket-propelled grenade.

Sgt. Maj. Daniel Ous said that the round shape of the tower will also cause an RPG that is slightly off target to glance off.

Ous said the design came from a Army Reserve engineer, who was on the base three months ago. Ous remembers his last name &#8212; Maypole &#8212; but the first name has been lost to history.

The design was given to a local contractor who delivered a prototype that failed to stand up to the RPG test. A few inches have been added to the thickness, and soon another RPG will be fired at the tower segment. If it withstands the test, the plan will get the go-ahead.

The towers will guard the 1&#189;-mile perimeter of FOB Eagle, near the town of Balad about 50 miles north of Baghdad. They will replace the traditional wooden towers reinforced with sandbags now in use at FOB Eagle and nearly every other base in Iraq.

The towers will be buried in the earthen berm that now rings the base and soldiers will enter through a doorway in the lower ring. Ous said this is better than conventional towers that offer no protection for a soldier climbing up or down.

Holes in the top ring will provide 360 degrees of surveillance around the base, which is in the area known as the Sunni Triangle. A ladder made from metal rods will be attached to the interior wall for soldiers to climb into position.

Ous said the earthen berm surrounding the bottom of the tower will provide added protection from the summer heat next year when temperatures are sure to reach in excess of 130 degrees Fahrenheit. Also, a small heater in winter will send heat upward to warm the area where guards do their job.