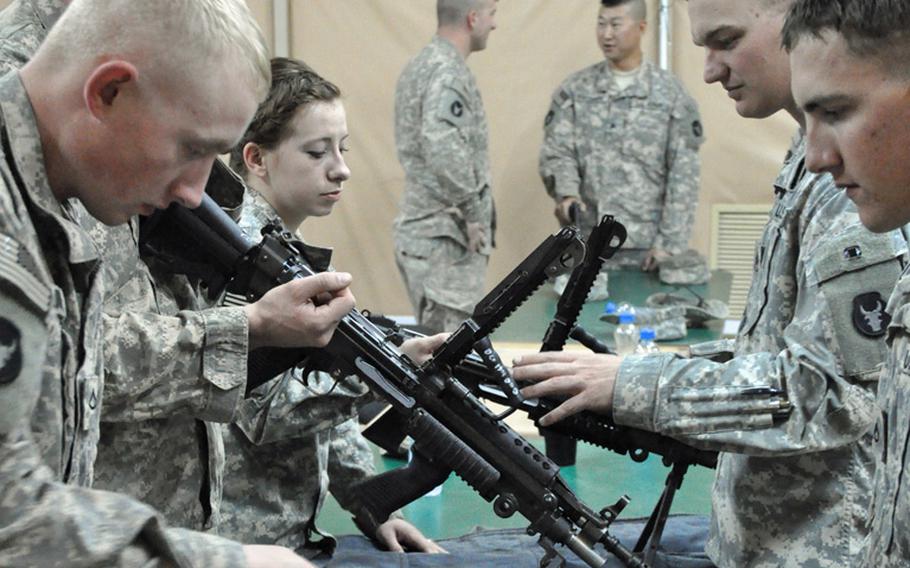 Buy Photo
Soldiers with the 1st Brigade Combat Team, 34th Infantry Division of the Minnesota National Guard conduct weapons training at Camp Buehring, Kuwait, last month. The unit was one of many currently deployed that is affected by a Pentagon decision to cut leave days provided to soldiers who have deployed multiple times in a short period. Many of the soldiers will lose about three weeks of paid leave upon returning home. (Megan McCloskey/Stars and Stripes)

Soldiers now in Kuwait with the Minnesota National Guard will receive at least 21 fewer leave days than they were told when they deployed &mdash; a month&rsquo;s pay gone. And more importantly, they say, a month less time to spend with family and to reintegrate before returning to their civilian jobs.

The soldiers expected that leave time because of a policy the Pentagon started in 2007 to make up for repeatedly deploying soldiers without adequate dwell time. Guard soldiers are supposed to have five years in between deployments, but with the two wars, units have been deploying more frequently.

The policy provided an increasing number of days off for each month soldiers were deployed beyond 12 months, 18 months and 24 months in a five-year period. For many of the Minnesota Guard soldiers, who spent 22 months mobilized for the Iraq war from 2005 to 2007, they deployed last summer to assist with the Iraq drawdown, expecting to earn four days of additional time off for nearly every month they were gone. But in October, midway through their tour and as they racked up millions of miles providing security for convoys exiting Iraq, the Pentagon changed the policy for all units, regardless of whether they were already deployed. Now, instead of earning four days each month, the Minnesota Guard soldiers will get one day per month.

The change mid-deployment has riled up the Minnesota Congressional delegation, whose members say the Pentagon is reneging on a promise made to soldiers.

Kline and Democratic Sen. Amy Klobuchar are trying to grandfather in units that deployed under the original policy, including not just Minnesota&rsquo;s 1st Brigade Combat Team and other Guard units, but also active-duty units, which also are affected by the policy change and will see a loss of leave time.

Thus far, the Pentagon has shrugged off that request. An undersecretary for defense responded to Kline in a letter, saying that a committee reviewed the policy and that the Pentagon was comfortable with the changes.

It&rsquo;s a particularly hard break for soldiers who are unemployed, which is about 35 percent of the brigade, leaders say. Kemper and others said many soldiers were counting on the leave time as a buffer to help get them by as they searched for a job.

Others are scrambling to change family plans and asking employers to return to work early.

&ldquo;It&rsquo;s really shady dealings,&rdquo; Sgt. 1st Class Sean Brown said. &ldquo;We deployed having made career decisions based on that leave, and then we got here and they stole the card off the table.&rdquo;

Sgt. 1st Class Daniel Langley had to sell his trucking business for the second time in order to deploy, and he estimates it will take at least six months to rebuild his business. A month&rsquo;s pay would have softened that transition financially.

More than the money, though, soldiers said they were concerned about the loss of time with their family. The leave would allow Guard soldiers more time to decompress at home with a paycheck.

Kline and Klobuchar have both introduced bills to force the Pentagon&rsquo;s hand, either as an attachment to the defense authorization bill or as freestanding legislation.

However, even if either of those measures are successful, they will likely come too late to ensure the Minnesota soldiers get their time off right as they return from deployment in the spring. Instead, soldiers would likely just get a lump sum down the line.

The Minnesota soldiers know that from first-hand experience. This is the second time they have had to fight for these benefits. After returning from Iraq in 2007 &mdash; having spent 16 months there, more than any other unit &mdash; they weren&rsquo;t given the benefits because they returned home before the Pentagon had a system in place to pay the Guard and Reserve. It took Congress stepping in on their behalf for the nearly $10 million to finally come through three years later.

&ldquo;We can&rsquo;t change our mind mid-deployment about serving; we don&rsquo;t get to leave until we&rsquo;re done,&rdquo; Eustice said. &ldquo;[Officials] should have to uphold their end of the bargain, too.&rdquo;