Guard duty in Iraq is most dangerous on 6 to 10 p.m. shift Buy Photo
A soldier in an Abrams tank scans outside the Camp Warhorse, Iraq, perimeter after the base was mortared Sunday night. Artillery was fired toward the suspected mortar launch sites, and tanks and helicopters headed to the area minutes later. This photo was taken through a night-vision monocle. (Jason Chudy/Stars and Stripes)

Buy Photo
A soldier in an Abrams tank scans outside the Camp Warhorse, Iraq, perimeter after the base was mortared Sunday night. Artillery was fired toward the suspected mortar launch sites, and tanks and helicopters headed to the area minutes later. This photo was taken through a night-vision monocle. (Jason Chudy/Stars and Stripes) 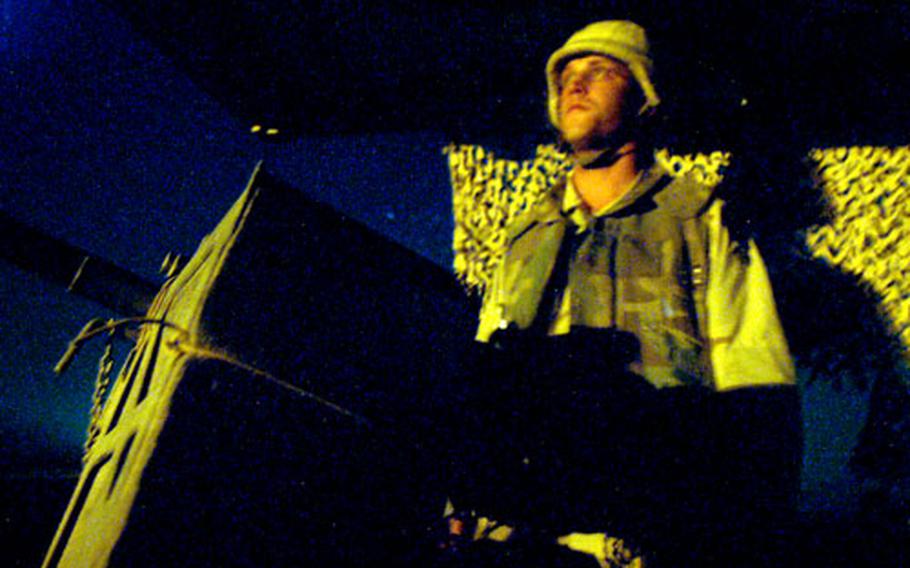 Spc. Chad Larson watches the countryside outside Camp Warhorse&#39;s north gate Sunday night after the base was attacked with mortars. Larson has his M-16 rifle and Mk-19 40mm grenade launcher with him in the second-story tower. (Jason Chudy / S&S)

That is when the base is most likely to face an attack.

Last Sunday night was no exception.

Fifty minutes into the shift, three soldiers in the north gate guard post heard the &#8220;thunk&#8221; of mortars being fired toward the camp.

Nearby, two soldiers dropped into their ammunition carrier and closed the metal hatches. But Staff Sgt. Darrell Beck, Sgt. Justin Flottmeyer and Spc. Chad Larson didn&#8217;t have that luxury. All they could do was crouch down a bit behind their fortified position at the guard post.

The first mortar landed outside the perimeter less than 500 yards away.

The three 200th Engineer Company soldiers looked into the surrounding countryside for flashes, indicating from where the mortars were being fired. But bright lights from a nearby pumping station hindered their night vision.

The other mortars landed deeper in camp.

On this night, the Army struck back. Battery fire from an M109A6 Paladin headed off into the darkness in the direction of the mortar launches. Soldiers could hear the whistle of the friendly shells as the rounds flew overhead and crashed into the darkened countryside.

A few minutes later, two Kiowa helicopters flew toward the area. A few minutes after that, two M1A1 Abrams tanks rolled past the guard post.

The mortars had set off a hornet&#8217;s nest of activity, but within minutes, the scene was calm.

Flottmeyer looked at his watch.

They talked about how the 6-10 p.m. shift is the one in which the base is almost always attacked. Only once, they recalled, had the base been hit during any other time of night &#8212; a 5 a.m. shelling that destroyed one of its trucks.

A few shells have been fired during the day, but everyone on camp knows that the greatest danger of mortar attack is early evening.

Everyone, that is, except the soldiers at the Warhorse guard posts. They&#8217;re too busy making sure everyone else is safe.