Guantanamo Bay — outside the wire The Northeast Gate, the only gate between U.S. Naval Station Guantanamo Bay and Cuba, lets three Cubans through each day. The Cubans worked for the U.S. goverment and now transport retirement money to other Cubans who formerly worked on base. (Emily Brown / S&S)

The Northeast Gate, the only gate between U.S. Naval Station Guantanamo Bay and Cuba, lets three Cubans through each day. The Cubans worked for the U.S. goverment and now transport retirement money to other Cubans who formerly worked on base. (Emily Brown / S&S) Three rows of barbed wire line the fence between U.S. Naval Station Guantanamo Bay and Cuba. The land immediately on the other side is a buffer zone between the U.S. fence and the Cuban fence. (Emily Brown / S&S) 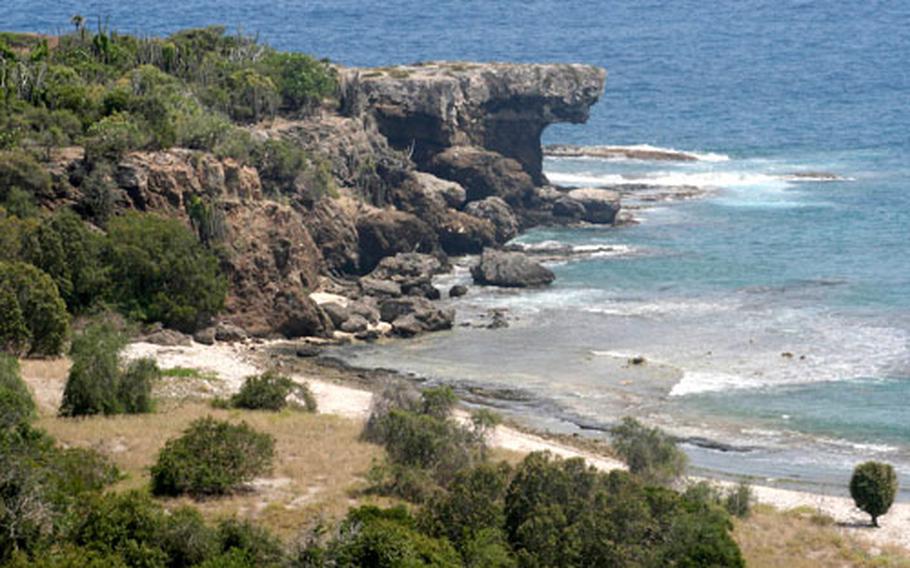 The Caribbean Sea, Atlantic Ocean and Gulf of Mexico all meet near Guantanamo Bay. The water is clear and warm, but the beaches are full of rocks and coral. (Emily Brown / S&S) A lighthouse keeper&#39;s house was turned into a museum of GTMO. The yard is a cemetery of boats refugees used to get away from their native countries. (Emily Brown / S&S) 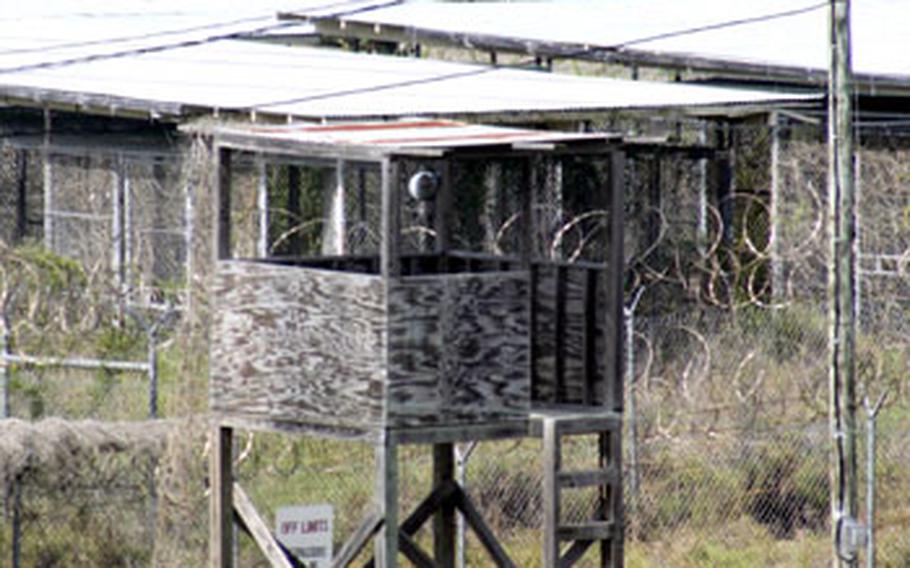 GUANTANAMO BAY, Cuba &#8212; At night, the 17.4 miles of fence line between Naval Station Guantanamo Bay and the communist-ruled Republic of Cuba is a twinkling string of lights in the distance.

Pretty, but a reminder that the 7,265 residents of this base are in one of the military&#8217;s most unique living situations: an isolated edge of an island they can never explore due to fundamental differences with their host &#8212; the Republic of Cuba.

And then there is what Guantanamo Bay is best known for: detaining terrorist suspects after the attacks of Sept. 11, 2001.

"When people think of Gitmo, they think of detainees," said Kathy Einhorn, principal of W.T. Sampson Elementary and High School at Guantanamo Bay. "But there&#8217;s a whole community here and they&#8217;ve been here a long time."

"GTMO" is America&#8217;s oldest continuously functioning overseas base, and its only military base on communist soil. The station provides logistical support to the U.S. Navy and Coast Guard operating in the Caribbean and battles drug trafficking and offers protection for those attempting to sail in un-seaworthy vessels.

"Strategically it&#8217;s of huge importance because we are the last naval station in this Caribbean theater," said Cmdr. Sylvester Moore, executive officer of the base. "Because of Guantanamo Bay, our U.S. government, our U.S. military, doesn&#8217;t have to ask permission to use this base and the resources it provides.

"This base can be a perfect jumping-off point" for exercises in the theater, he said.

Guantanamo Bay is on the southeast end of Cuba, the opposite side of the island from Havana. It is 520 miles south of Miami. Jamaica is 90 miles to the south, and Port-au-Prince, Haiti, is 180 miles southeast.

Most of the living and working space of the 45-square-mile base hugs the bay. The rest of the base is either hilly, rugged terrain covered in cacti and palm trees, or salt and mud flats not suitable for building.

The base is centered on the bay, with the east side being more developed. The northeast corner of the base hosts the only gate into Cuba, a gate none of the residents have used since 1959, when communist revolutionaries led by Fidel Castro overthrew the Cuban government and the U.S. government banned servicemembers from entering Cuban territory. The general population on the base can&#8217;t even see the gate or get near it due to a roadblock.

Along the ocean are the detainee camps. They are separated physically and visually from the main town by rugged mountains and a gate secured by Joint Task Force personnel.

"This base isn&#8217;t all about the [detainee] camps," said Kaylee Williams, 18. "There are different commands that make this base go. It&#8217;s not all about the military members. There are families here, too."

The west side of the bay has the airport, the migrant camp for foreign nationals the Coast Guard may pick up in the ocean, and a few living quarters. The east and west sides of the base are connected by a ferry.

The base population ebbs and flows. In 1985, at the height of fleet training, there were about 6,500 people on base. By 2001 the number was down to 2,700. Because of the detainee camps, the population has grown to 7,200. But what the community stresses to outsiders, whether it&#8217;s teens via the social-networking sites on the Internet or executives in official briefings, is that this base is much more than detention facilities.

"Gitmo would be here even if the detainees were not," said Katherine Steele, the school&#8217;s guidance counselor.