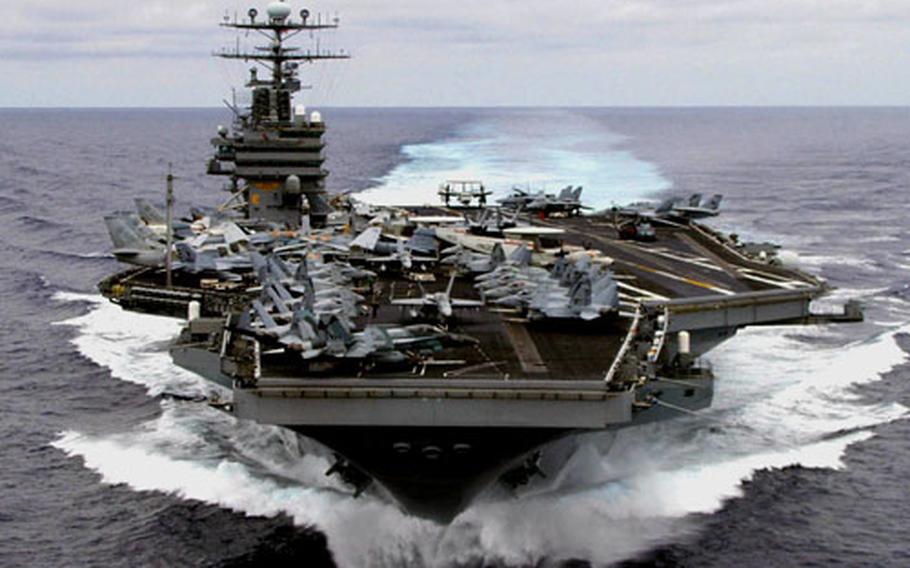 The USS Carl Vinson pulled into Guam's Apra Harbor for a scheduled port call on Feb. 24, 2005. Due to the effects of sequestration, the Navy said in 2013 that it is planning to cancel some training for the carrier strike group. (Daniel Smith / U.S. Navy)

Guam is teeming with sailors this week from the USS Carl Vinson, which pulled into Apra Harbor on Monday for a scheduled port call.

The nuclear-powered aircraft carrier and three other ships in its strike group unloaded more than 6,000 sailors on Guam for a week of liberty, Navy officials said Tuesday.

The ship, which put to sea Jan. 13 from its homeport of Bremerton, Wash., is on an &#8220;around- the-world deployment&#8221; en route to Norfolk, Va., where it&#8217;s to begin a three-year maintenance period, called a refueling and complex overhaul, according to a Navy news release.

The refueling and upgrades will &#8220;make us practically the newest carrier in the fleet,&#8221; McIlnay said Tuesday from the ship.

The Vinson isn&#8217;t due into Norfolk until mid-July. Referencing Navy policy against discussing ship movements, McIlnay said he couldn&#8217;t say where the carrier is scheduled to visit next and whether it will stop in Japan. &#8220;From here, we&#8217;ll continue with our Western Pacific portion of our world deployment in conjunction with our home port change,&#8221; he said.

Navy Lt. Arwen Consaul, U.S. Naval Base Guam spokeswoman, said in a written statement, that the base spent a month preparing for the battle group&#8217;s port call. &#8220;We secured 36 port buses for the sailors to take into town,&#8221; she wrote. &#8220;Naval Base Guam delivered 1.5 million gallons of fuel to the ships that pulled in. Through [Morale, Welfare and Recreation], we had vending machines on the pier, food and telephones for sailors to use.&#8221;

Guam&#8217;s Pacific Daily News reported Tuesday that by Monday afternoon, the island &#8220;was plush with sailors in rental cars, standing in line at Kmart, walking the beach in Tumon and zipping around Hagatna Bay on personal motorized watercraft.&#8221;