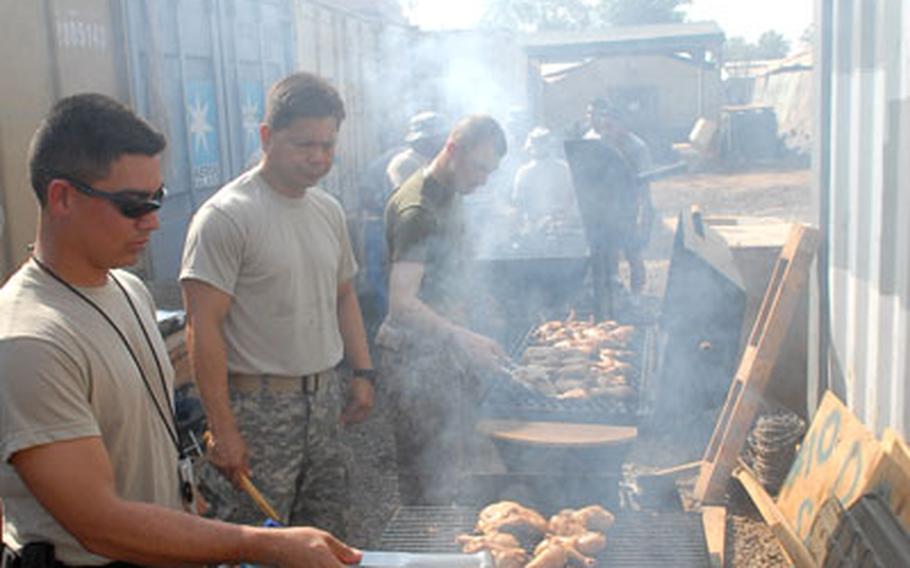 The grills on Camp Lemonier in Djibouti were working on Christmas Day as members of 1st Battalion, 294th Infantry Regiment, Guam Army National Guard, prepare a Christmas barbecue. The holiday feast was expected to feed hundreds of the U.S. Servicesmembers spending the holidays in Africa. (Zeke Minaya / S&S)

The grills on Camp Lemonier in Djibouti were working on Christmas Day as members of 1st Battalion, 294th Infantry Regiment, Guam Army National Guard, prepare a Christmas barbecue. The holiday feast was expected to feed hundreds of the U.S. Servicesmembers spending the holidays in Africa. (Zeke Minaya / S&S) Spc. Fred Rocio, 40, of Guam, takes a break from cooking up a Christmas Day feast to show off some moves on the dance floor. Rocio and fellow members of the 1st Battalion 294th Infantry Regiment, Guam Army National Guard, have become known on Camp Lemonier for their barbecues and lively get-togethers. (Zeke Minaya / S&S) 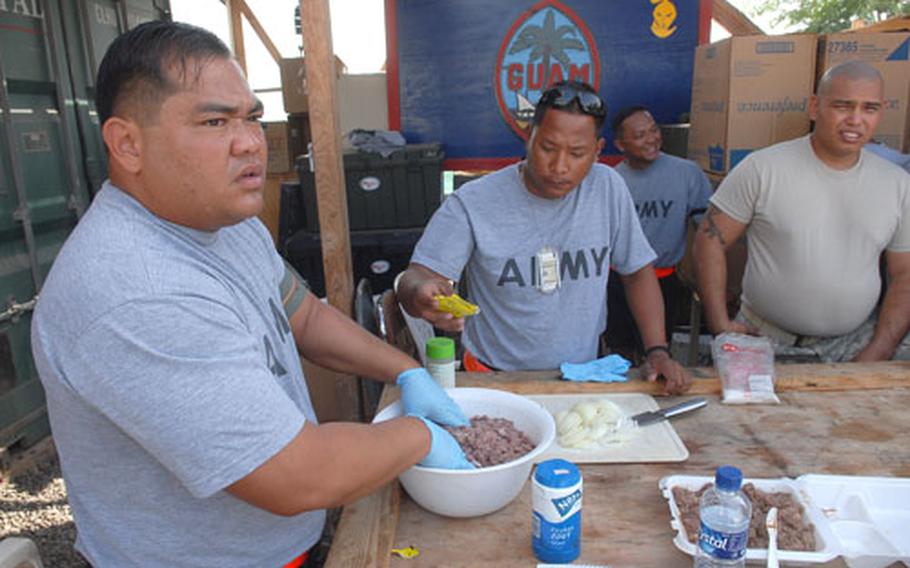 DJIBOUTI CITY, Djibouti &#8212; New arrivals to Camp Lemonier quickly learn two inevitable facts of life on the American base. First, it gets incredibly hot in Djibouti. Second, the soldiers of the Guam National Guard can throw down in the kitchen.

On Christmas Day, with a radio blasting reggae-tinged beats, the servicemembers of the 1st Battalion, 294th Infantry Regiment were at it again, adding to their culinary legend by preparing a feast for the holiday.

There were no measuring cups to be seen. They were not needed, the cooks insisted.

The spices were flying. Lemon powder, an assortment of hot peppers, onions and other ingredients native to the Pacific Island&#8217;s kitchen were mixed, mashed, swirled and sprinkled with beef, chicken and fish.

&#8220;Back from where we&#8217;re from we are born and raised to cook; we learn it from our elders,&#8221; Benavente said as he kneaded a fresh batch of Beef Kelaguen, a savory concoction of raw meat, lemon juice, onions and hot peppers.

Benavente said he started cooking when he was 6, doing simple dishes like rice. There is no single signature Guam dish, he said.

Skill with ingredients only partially explains what makes a Guam cookout so special, several of the guardsmen said. Their ability with food is an extension of their warm and open culture, they said.

Visiting Guam is like meeting family members you never knew you had, they said.

The dinner Christmas Day, when temperatures were in the mid-80s, would be enough to serve several hundred of the U.S. servicemembers and other personnel of the camp, the guardsmen said.

In Africa since April, the unit has been supporting the Combined Joint Task Force&#8211;Horn of Africa. They have been accompanying the various humanitarian missions as protection for the well drillers, doctors and veterinarians working to promote stability and goodwill in eastern Africa. The guardsmen have also participated in joint training exercises with African military members.

The members of the unit soon began to make a name for themselves, not only for knowing their way around a grill, but also for the inclusiveness of their gatherings.

Of course, Christmas Day brings thoughts of home. But, as they scramble around the hot grills and crackling frying pans, listening to music, laughing at each other&#8217;s jokes and passing around food, it&#8217;s clear that the Guam guardsmen brought a little bit of home to Djibouti with them.