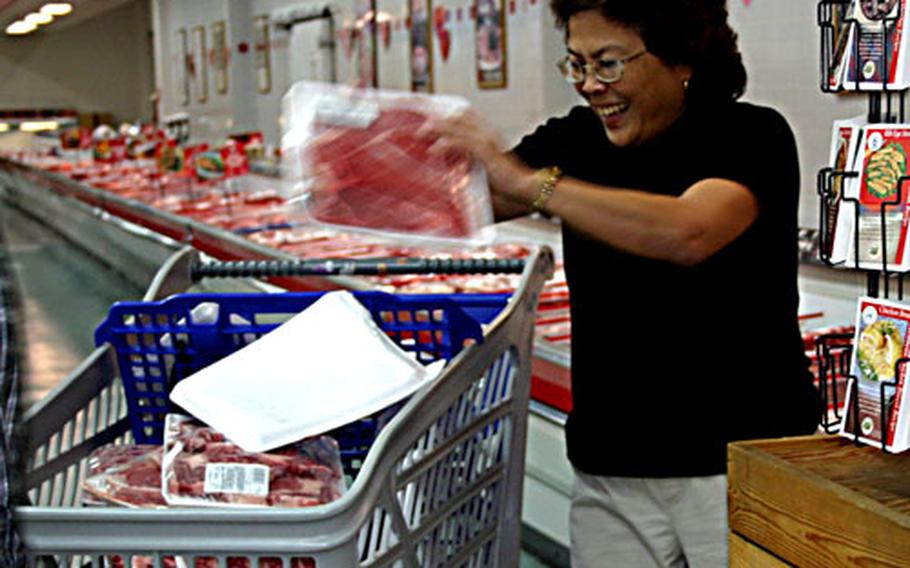 Catherine Flores McCollum loads her shopping cart with meat Friday during the three-minute shopping spree she won at the Orote Point Commissary on U.S. Naval Base Guam. (Frank Whitman / Special to Stripes)

An entry blank filled out on the spur of the moment won a Guam Commissary customer a three-minute shopping spree worth $1,069.30.

Catherine Flores McCollum, an administrative assistant at Guam Memorial Hospital and wife of Navy retiree Steven McCollum, won the Friday shopping spree when her entry was pulled by Cookie Sechler, district manager for Webco in Guam. The contest was sponsored by Frito-Lay.

About three weeks ago, McCollum had finished shopping at the Orote Point Commissary on U.S. Naval Base Guam and was waiting for her son in the front of the store. She noticed the box for entries with a sign announcing the prize.

Notified the night before the spree, she and her husband canceled plans to dine out for his birthday and started plotting.

Sticking the plan, Catherine loaded up on seafood and steak, but time ran out before she could get to the laundry products.

The couple is anticipating the birth of their fourth grandchild soon, and the groceries will come in handy at the ensuing celebration, McCollum said.