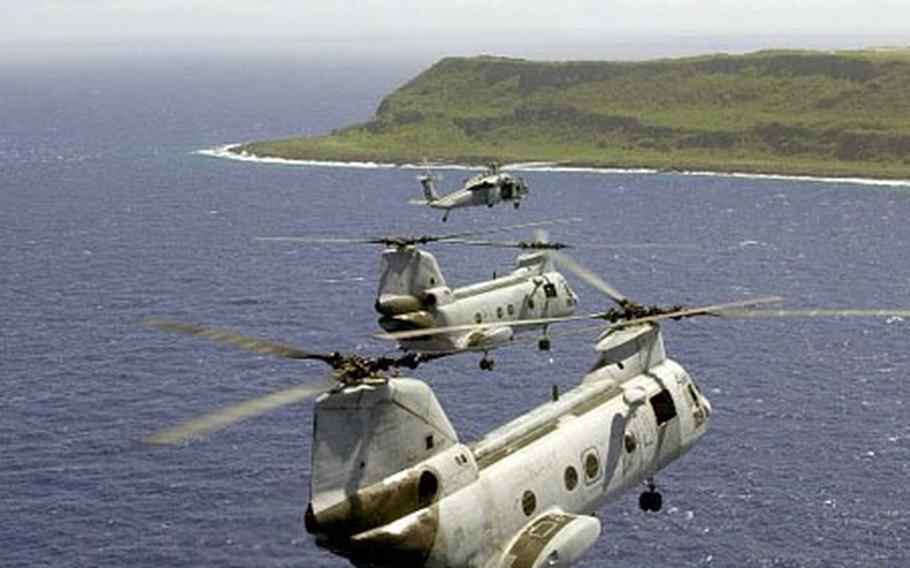 Two UH-46 Sea Knights and one MH-60 Knight Hawk fly toward Guam as a part of a six-helicopter formation during flight training in mid January. The helicopters are assigned to the Chargers of Helicopter Combat Support Squadron Five stationed at Andersen Air Force Base. (Courtesy of U.S. Air Force)

Two UH-46 Sea Knights and one MH-60 Knight Hawk fly toward Guam as a part of a six-helicopter formation during flight training in mid January. The helicopters are assigned to the Chargers of Helicopter Combat Support Squadron Five stationed at Andersen Air Force Base. (Courtesy of U.S. Air Force) 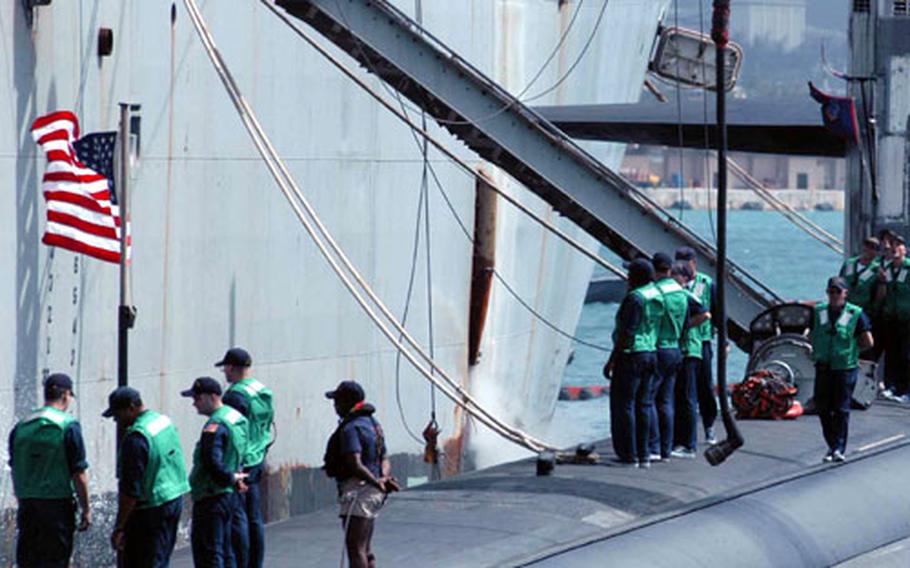 Just months ago, waves splashed only against Polaris Point&#8217;s shores. Now they roll upon the hull of fast-attack submarines.

Only a month ago on Guam, the loudest noise on Andersen Air Force Base&#8217;s flight line was the breeze from a seasonal trade wind. Today, it reverberates with the rumble of B-1B Lancer and B-52H Stratofortresse bombers.

Long, hard lobbying of Washington has paid off: Military leaders are rediscovering the strategic importance of the United States&#8217; most western-projecting territory.

Military activity is amping up at both ends of Guam&#8217;s 212 square miles: To the south is Naval Forces Marianas; to the north, Andersen Air Force Base and a small Navy satellite telecommunications base.

The third and proposed final vessel to join Submarine Squadron 15 was announced earlier this month. The USS Houston is to roll into Guam&#8217;s Apra Harbor in January 2004, said the squadron&#8217;s commander, Navy Capt. Joseph Mulloy. It joins the USS City of Corpus Christi and USS San Francisco as the only fast-attack submarines stationed outside the continental United States.

Compared with the western United States, he said, Guam &#8220;gives us a tremendous advantage. We&#8217;re saving hundreds of miles of wear and tear on these ships.&#8221;

The Houston will have the same size crew as the other subs, Mulloy said: around 150 sailors. Many will bring children and spouses &#8212; all contributing to the island&#8217;s military population.

That&#8217;s exactly what Guam&#8217;s Chamber of Commerce was hoping would happen when it submitted a written proposal to U.S. and Department of Defense officials in May 2002.

The paper touched upon the squadron&#8217;s importance as a forward defense and how the island adds to its readiness.

Moments after you drive through Andersen&#8217;s gates, B-1 and B-52 bombers parked on the expansive runway come into view &#8212; a stark contrast to the base&#8217;s palm-tree-lined boulevards and a reminder that Guam no longer is a military backwater.

The bombers, and numerous personnel to support them, make up the 7th Air Expeditionary Wing, commanded by Col. Jonathan George, a B-1 pilot from Dyess Air Force Base, Texas. The first B-1s and B-52s, from Dyess and Barksdale Air Force Base, La., respectively, began arriving the first week in March amid escalating U.S.-North Korean tensions.

George characterized their presence as &#8220;stabilizing,&#8221; not an act of aggression.

The bombers fly training sorties daily, soaring out over sheer limestone cliffs that drop into the ocean just beyond Andersen&#8217;s runway. One B-1 can carry up to 24 conventional 2,000-pound bombs guided by the global positioning system. Each has the destructive power released in the the 1995 Oklahoma City bombing, George said.

Supporting the bomber units are aviators, mission planners, and maintenance, support and munitions personnel. About 15 percent of the 7th AEW come from other bases than Dyess and Barksdale, George said, including Pacific Air Forces bases.

Advantages of operating bombers from Guam, he said, include that it&#8217;s open airspace with no large metropolitan areas and minimal commercial airliner traffic.

Then there&#8217;s the tyranny of distance, as the Air Force calls it: Guam is 14 hours closer to most potential Pacific hot spots than any U.S. mainland bases are.

The 36th ABW can support a large number of planes and people flowing through, but no aircraft are assigned to the wing.

That soon could change.

Speaking at a Guam Chamber of Commerce meeting March 3, PACAF Commander Gen. William J. Begert said he&#8217;d like to see an increased Air Force presence on the island, including what he called &#8220;some kind of permanent bomber presence,&#8221; Guam&#8217;s Pacific Daily News reported.

PACAF spokesman Lt. Col. Frank Smolinsky said Guam&#8217;s location makes it a strong candidate for placing &#8220;any type of aircraft, whether that be fighters or bombers. General Begert is a strong advocate of the permanent basing of Air Force aircraft at Andersen Air Force Base, if the Air Force determines the need to reposition assets in the future.&#8221;

The Global Hawk cruises at high altitudes to &#8220;survey large geographic areas with pinpoint accuracy,&#8221; states an Air Force fact sheet. It can range up to 12,000 nautical miles and capture images of an area the size of Illinois in 24 hours.

The population at Naval Forces Marianas is to jump by 250 next year, as Mobile Security Unit, Guam, fills its ranks.

Another deployable unit &#8212; Andersen&#8217;s 613th Contingency Response Squadron &#8212; soon is to expand. The squadron will activate into a group March 28, growing from 39 authorized positions to 110. Its mission: to assess the security and suitability of a deployed location for PACAF troops.

The only unit of its kind in PACAF, Guam was the natural choice when the squadron was created two years ago, said 613th CRG Commander Col. Benjamin Pulsifer.

Better than the desert

Guam still is considered a remote tour for sailors and airmen &#8212; 24 months with dependents and 15 months unaccompanied.

Military and family members who&#8217;ve been here long enough can rattle off the disadvantages: the expense of flying home to the States; the high cost of living; cramped quarters on an island no longer than 35 miles long and 8 miles wide and the dreaded typhoon season.

But not many complain about the year-round temperate climate and the beaches.

The local government isn&#8217;t shy about asking for a permanent resident. In fact, the written proposal the Chamber of Commerce sent Congress resembles a wish list of military aspirations.

From open bids on equipment already stationed elsewhere &#8212; such as the USS Essex Amphibious Ready Group and its 31st Marine Expeditionary Unit passengers &#8212; to a nuclear carrier, the paper argues that Guam can house even more U.S. forces.

Carl Peterson, a Chamber of Commerce member and chairman of Guam&#8217;s Armed Services Committee, cited a proposal to dredge Apra Harbor to give a ship of the Vinson&#8217;s magnitude a permanent home. He said Guam has its sights set on whichever ship is to replace the USS Kitty Hawk after its planned 2008 decommissioning.

The Kitty Hawk is based at Yokosuka Naval Base, Japan.

Jlawrence Cruz, president of the Department of Chamorro Affairs, which works to preserve island culture, said Guam should be considered ahead of foreign countries for placing future military assets.