Guam sailor is the first to complete Expeditionary Warfare program 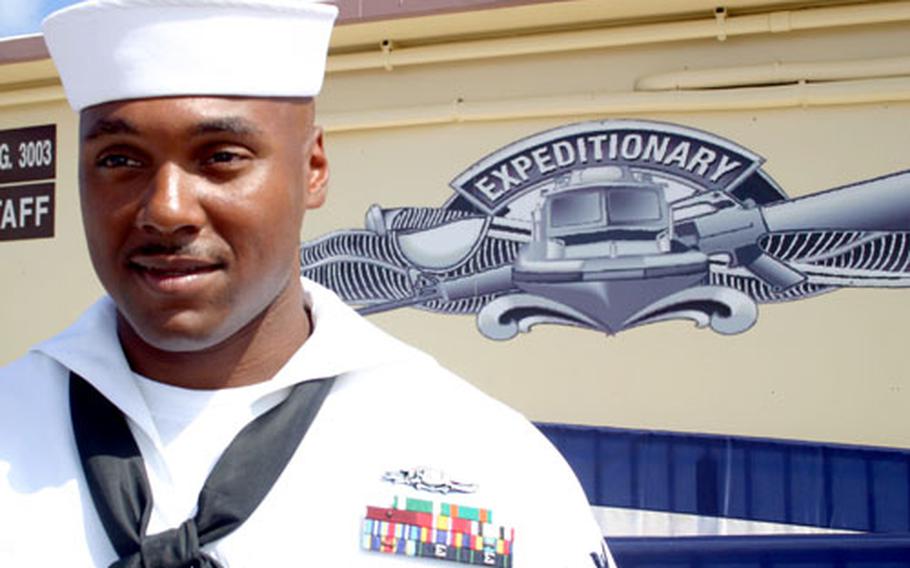 Petty Officer 2nd Class Carl Hurtt, a master-at-arms with Mobile Security Squadron 7 at U.S. Naval Base Guam, was the first sailor to complete the Navy’s new Expeditionary Warfare program. He received the Expeditionary Warfare device he’s wearing — seen larger on the wall behind him — at a ceremony Friday. (Frank Whitman / Special to S&S)

The Expeditionary Warfare device was pinned on a member of the U.S. Navy for the first time Friday.

Hurtt and others began the five-month training program while deployed to an Iraqi oil platform. He completed it after his return to Guam.

The new program &#8212; for the first new Navy warfare device in six years &#8212; standardizes the training and &#8220;recognizes the special sailor skills that cross all of NECC forces,&#8221; Bullard said.

The first part of the program &#8220;is a core set of competency skills that has to be demonstrated and tested within expeditionary skills: shoot and maneuver, force protection and things like that. The second portion is a set of qualification skills specific to the unit.&#8221;