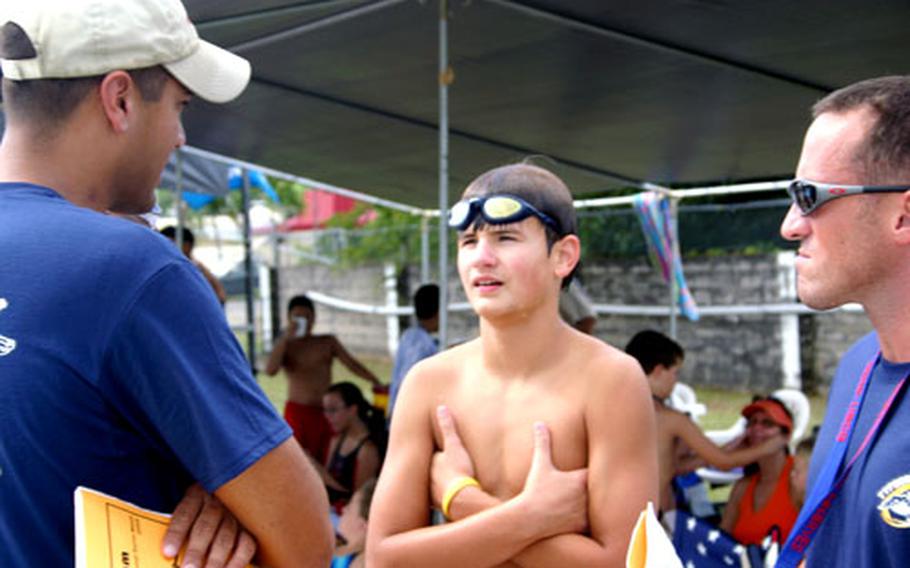 During the past year and a half, the Andersen Air Force Base Marlins and the Naval Base Typhoons swim teams have grown to about 40 members each and have been competing in Guam Swim Federation meets at a 50-meter pool in Agana.

Military swimming in Guam hit its zenith in the late 1970s when the Marlins&#8217; membership topped 100 swimmers, the Naval Station Dolphins numbered about 70 and a third team, the Naval Communication Station Seahorses, had about 100 swimmers.

As activity and personnel at both Andersen and the Naval Base have increased during the past five years, it was only a matter of time before competitive swimming was re-established. In 2003, Guam resident Dan O&#8217;Keeffe, a former collegiate swimmer and Olympic representative for Guam, received approval from Andersen&#8217;s Outdoor Recreation to start a program. Ten swimmers began the thrice-weekly sessions and the number soon grew to around 40, where it has remained.

Proper stroke technique and enjoyment are the priorities in O&#8217;Keeffe&#8217;s program, particularly for those being introduced to the sport. O&#8217;Keeffe is also an open-water swimmer and frequently trains the Marlins at local beaches.

The Naval Base team began in September 2004, after Commodore Brad Gehrke, commander of Submarine Squadron 15, was transferred to Guam.

Gehrke&#8217;s teenage daughters had been swim team members in his previous duty station in Italy and he was eager for them to continue.

Initially considering a civilian team, Gehrke decided the base should have a program. He recruited a local coach, set up the team organization and put the word out.

&#8220;Before we knew it, there were 45 kids at the pool. People were just waiting for this kind of activity,&#8221; said Lt. Kevin Barnett, with Submarine Squadron 15 and father of Austin Barnett, 12, and Tyler Barnett, 8, both members of the Typhoons since the team&#8217;s inception.

The current head coach of the Typhoons is Lt. Gopi Nadella with Judge Advocate General Corps, a former competitive swimmer and coach in Ohio. The Navy team practices three times a week and holds stroke clinics on Saturdays when no meet is scheduled.