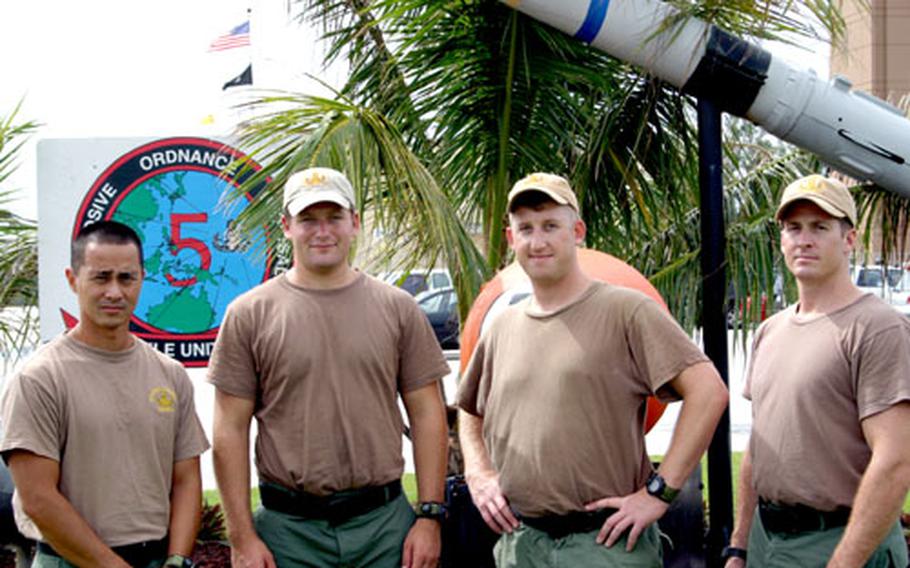 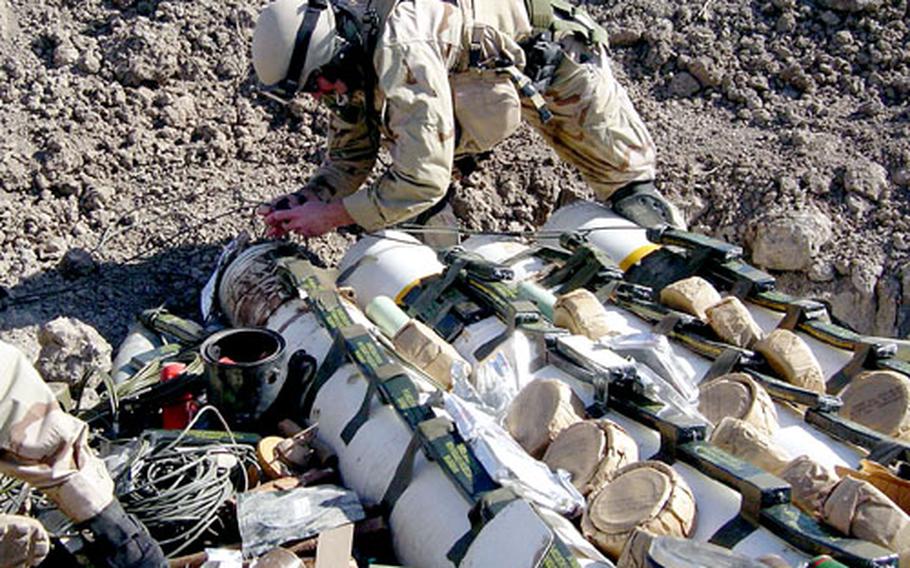 Petty Officer 1st Class Jeffrey Gates disposes of ordnance in Iraq. Gates is now back in Guam with his family. (Courtesy of U.S. Navy)

GUAM &#8212; A group of Guam-based U.S. sailors recently returned from a six-month Iraq deployment, where they put their explosive ordnance disposal skills to work supporting the Marine Corps.

Four members of Explosive Ordnance Disposal Mobile Unit FIVE returned from Iraq in mid-August after a deployment with the First Marine Fleet Anti-Terrorism Security Team, which was providing security to the Coalition Provisional Authority headquarters in Baghdad&#8217;s Green Zone.

Before the Guam team arrived, the nearest EOD unit was three or four hours from the CPA headquarters &#8212; &#8220;the place the insurgents really wanted to hit,&#8221; said Lt. Will Ranney, the team&#8217;s officer in charge. Marines, he said, understandably wanted &#8220;in-their- hip-pocket EOD response capability.&#8221;

The team responded to improvised explosive devices and ordnance recovery calls, conducted post-blast investigations of rocket and mortar attacks and helped train coalition forces in IED recognition and safety. Although there was little call for working underwater, which is much of the unit&#8217;s training, unit members responded to more than 75 calls and disposed of more than 10,000 pounds of high explosives.

During one IED incident, two civilian contract workers leaving an underground parking area at the Al Rasheed Hotel saw an IED drop off a vehicle leaving the area. After calling authorities, the civilians walked back down the parking ramp and found themselves at a dead end 30 feet below street level.

With the help of a robot and another EOD team, the Guam unit successfully disabled the device.

The team also worked on what turned out to be a box containing sheet music for the Iraq Symphony Orchestra. &#8220;With the amount of things that happened, you could never really be sure,&#8221; Ranney said.

After the attacks the team would ensure the device had exploded and posed no further hazard. &#8220;There&#8217;s so much ordnance over there, it&#8217;s unreal,&#8221; said Petty Officer 1st Class Tyler Borgwardt. &#8220;At one point, we found a garage where an Army unit had been staying through the ground fighting up until two or three months before we got there.&#8221;

&#8220;They took us over and opened up this garage. It was full, wall-to-wall, with every type of ordnance I&#8217;ve ever seen or read about, from large bombs to hand grenades to small arms to rockets, rocket launchers,&#8221; Borgwardt said. &#8220;Most of it had come in from the previous Army unit who had collected it, didn&#8217;t know what to do with it and had just stored it in that garage.&#8221;

Iraq presented other challenges for the team. &#8220;The heat was crazy,&#8221; Makaneole said. Temperatures were in the 40s when the group arrived in February, but that changed within two months.

Vegetables were less than appetizing. &#8220;We saw people eating stuff that was all brown and rotten,&#8221; Makaneole said. &#8220;When I got back to the commissary in Guam, I just stood there and stared at everything.&#8221;

Both Makaneole and Petty Officer 1st Class Jeffrey Gates are married and have young children, which, they said, made the deployment a little more difficult.

Team members agreed that they felt relieved to be back in Guam. &#8220;Just not being there is a relief,&#8221; Ranney said. &#8220;You never knew. One day it was the Iraq Symphony Orchestra and the next day it was a real IED falling off the bottom of a car. You just never knew and you had to treat every one like it was real.&#8221;