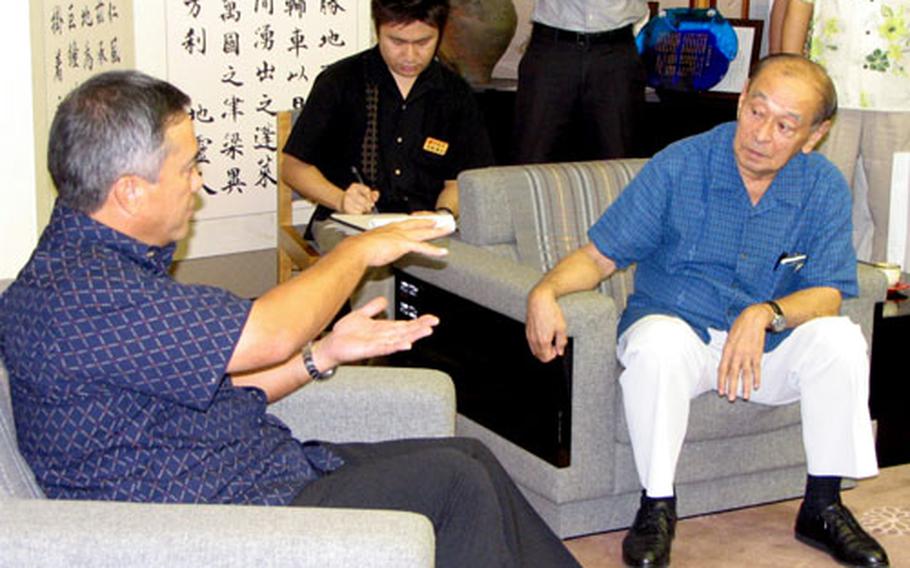 NAHA, Okinawa &#8212; The governors of Guam and Okinawa met for the first time Friday, promising to cooperate in the eventual transfer of 8,000 Okinawa-based Marines and their families to the U.S. territory by 2014.

&#8220;I came with hope that we can really build a relationship,&#8221; Guam Gov. Felix Camacho said during the half-hour meeting with Gov. Hirokazu Nakaima at the Prefectural Office Building.

Camacho acknowledged that the potential boon to Guam&#8217;s economy is contingent upon the realignment of Marines on Okinawa &#8211; including replacing Marine Corps Air Station Futenma with a new airport on Camp Schwab.

Camacho said he looked forward to touring some of the Marine bases on Okinawa, especially MCAS Futenma, and being briefed on the Camp Schwab plans.

&#8220;We hope that things are moving along, because everything that will happen on Guam is contingent on what happens here on Okinawa,&#8221; he said. &#8220;On Guam, we have begun to initiate environmental studies. The government must also prepare other facilities such as port, airport and roadways, to receive Marines.&#8221;

Later in the day Camacho was to meet other Okinawa leaders at a reception held by U.S. Consul General Kevin Maher.

&#8220;I will convey to the leaders of Okinawa that military expansion for Guam means progress,&#8221; he said. &#8220;I want to share with them that Guam is poised for sustained growth alongside our core industries of tourism and transportation. The military will bring a more developed local workforce and abundant job opportunities for our people and all the people of Micronesia.&#8221;