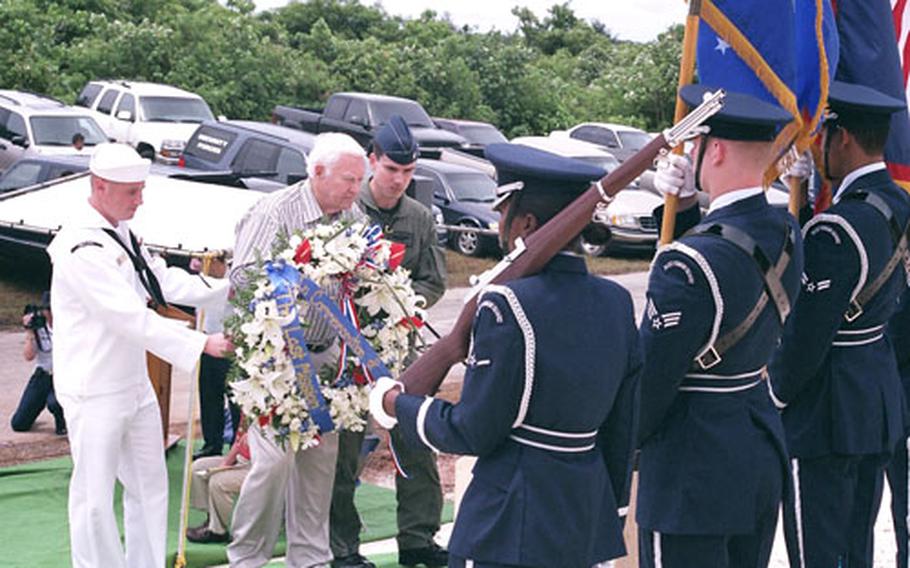 A monument to the &#8220;last mission&#8221; of World War II was unveiled in Guam on Monday, the 60th anniversary of the day 143 B-29B Superfortress bombers returned from bombing the oil fields in Akita, Japan.

As they were returning on the morning of Aug. 15, 1945, the Army Air Force crews picked up radio broadcasts of President Truman announcing the Japanese surrender, which the Japanese had signed just before the bombers passed over Tokyo.

The monument was erected at Northwest Field &#8212; adjacent to Andersen Air Force Base &#8212; the airfield from which the mission was conducted. About three dozen people attended.

Col. Michael R. Boera, commander of the 36th Air Expeditionary Wing at Andersen, spoke at the event, recounting the effort that went into the war&#8217;s end and its final air missions.

He was joined by Carl Peterson, a local businessman and the chairman of the North America/Pacific Armed Forces Committee of the Guam Visitors Bureau, which was responsible for the construction of the monument.

&#8220;It took a lot of courage to do what they did,&#8221; said Lt. Col. Paul Tibbets, a B-2 pilot with the 325th Expeditionary Bomb Squadron based at Whiteman Air Force Base, Mo., who attended the event. Tibbets, on Guam as part of a rotational bomber deployment, is the grandson of retired Maj. Gen. Paul W. Tibbets, pilot of the Enola Gay, which dropped the atomic bomb on Hiroshima nine days before the Akita mission.

Navy Petty Officer 2nd Class Justin Birch is the grandson of George Richard Green, a flight engineer on one of the B-29s that took part in the &#8220;last mission.&#8221;

&#8220;If he were here, I believe he would stand tall at attention and salute with pride,&#8221; said Birch, who is stationed at U.S. Naval Base Guam as a member of Explosive Ordnance Disposal Mobile Unit 5.

Tibbets and Birch laid a wreath at the foot of the monument with Kenneth Jones, a local businessman.

Jones was stationed on Guam as a Navy chief petty officer with the 25th Construction Battalion during the war. He and his unit helped build Northwest Field.

While he was appreciative of Monday&#8217;s ceremony, he wished it had happened sooner.