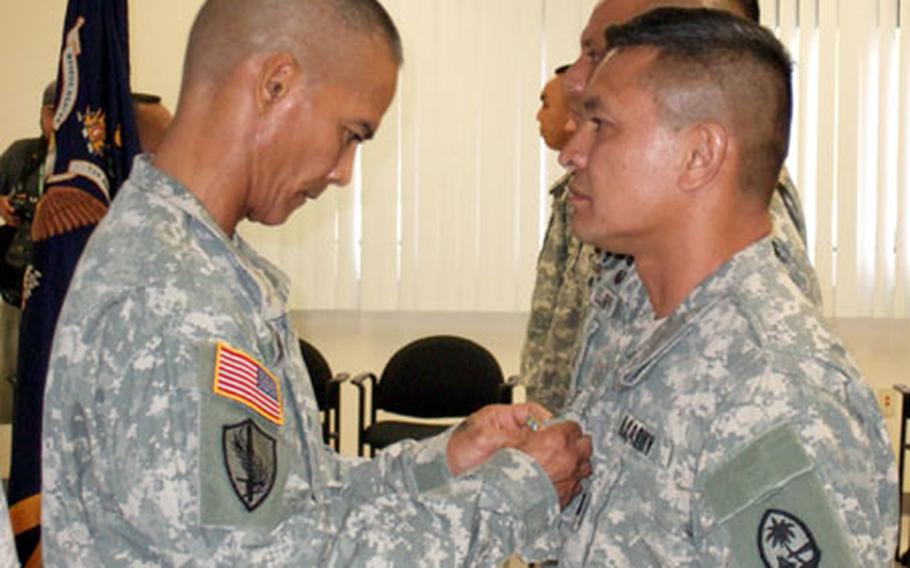 Since June 2004, members of the Guam Army National Guard have deployed to one of the newest hotspots in the war on terrorism, the Horn of Africa.

At its headquarters on Guam, a joint ceremony was held Saturday to recognize the unit&#8217;s achievements and to send off another group to support the Djibouti-based Combined Joint Task Force-Horn of Africa.

The Joint Meritorious Unit Award was presented to 152 members of the Guam Guard&#8217;s 1st 294th Infantry Battalion Company A and 153 members of Company B who were stationed in the Horn for yearlong deployments beginning in June 2004 and March 2005, respectively.

Following the presentation, the Guard held a sendoff ceremony for 150 members of Company D, which was scheduled to depart Wednesday for three months of training at Schofield Barracks in Hawaii before relieving Company C in Ethiopia.

Among those in attendance at the ceremony was state Command Sgt. Maj. Daniel Elliott, a member of Company C home on leave. He acknowledged it&#8217;s unusual for someone in his position to go on full deployment.

While the recent conflict involving Ethiopia and Somalia has raised the threat level, it has had little effect on the Guam guardsmen&#8217;s work, Elliott said.

Ethiopian soldiers, tanks and warplanes intervened in Somalia on Dec. 24 to help defeat an Islamic movement that threatened to overthrow the internationally recognized government, which at the time controlled only the western town of Baidoa.

But many in predominantly Muslim Somalia resent the presence of troops from neighboring Ethiopia, which has a large Christian population.

The countries have fought two brutal wars, the last in 1977.

On Saturday, hundreds of furious Somali protesters took to the streets, burning tires and smashing car windows while denouncing the presence of Ethiopian forces and shouting defiance at the Somali government&#8217;s call for disarming Mogadishu.

Two people died in Saturday&#8217;s violence, including a 13-year-old boy.

Capt. Joe Cruz, Company D commander, was a platoon leader during his first deployment in 2004 and was honored to receive the Joint Meritorious Unit Award.

&#8220;[The award] is rather difficult to achieve,&#8221; he said, adding that the unit has been successful in part because Guam is a small community.

&#8220;The brotherhood that we have is a lot tighter because we all know each other,&#8221; Cruz said. &#8220;With the kind of camaraderie and the attitude and the culture that we come from, we bring something different to the mission when we come out there. We&#8217;re close-knit and we know how to work well together. That&#8217;s always worked to our advantage.&#8221;